In all, Shepherd FFA collected 1,360 pounds of donated goods, with Coldspring FFA collecting a total of 616 pounds.

All proceeds will be divided equally and donated to the Shepherd and Coldspring Senior Citizens Centers. COURTESY PHOTO BY CASSIE GREGORY COCISD Police Chief Roosevelt Joseph and his team gave a year-in-review presentation at the COCISD school board meeting on Monday, March 22.

By Cassie Gregory
Special to the News-Times

COLDSPRING — The highlight of the March 22 COCISD Board of Trustees meeting was the yearly report given by COCISD Police Chief Roosevelt Joseph and his team of officers.

They reported on the year's events and outreach programs that have been implemented to build relationships with students, families and the community.

"A lot of what we've been doing is to foster the relationship between the public and police officers," Joseph said. "This has been a tough year with all of the things going on around the country. We are community based — that's what we are all about."

Some of the programs include Cops Who Care at the beginning of the school year, where officers give away free backpacks filled with school supplies, and Shop with a Cop at Christmas, which helps to provide gifts for students in need at Christmas.

"We don't want any child to wake up on Christmas morning without a gift under the tree," Joseph said.

The department also works with organizations and other police departments to acquire equipment, technology and software at no cost to the district. Recently, hey were awarded a grant for a sophisticated report-writing system that has cut down on the time it takes to record reports and has greatly increased the security of confidential information. Another grant provided equipment designed to teach students about the danger of vaping, and they also received new radios as a donation, saving the district $12,000.

"We work very hard every day to make this a safe environment, and we are going to continue," Joseph said.

The meeting began with the pledges of allegiance led by Coldspring Intermediate students.

Interim Superintendent Walter Key introduced and thanked the culinary arts students, followed by a presentation given by Assistant Superintendent of Curriculum & Instruction Vikki Curry and campus principals on benchmark scores.

In other business, trustees approved:

The next regular meeting of the COCISD Board of Trustees is set for 6:30 p.m. April 26 at the Jones Educational Complex Auditorium. SHEPHERD — Three businesses new to the community were honored by the Greater Shepherd Chamber of Commerce on Saturday, two with ribbon cuttings and one named Business of the Month.

Fierce Nutrition, a store that specializes in nutritious smoothies, shakes and herbal teas, was named Business of the Month for March and April. TONY FARKAS | SJNT Fierce Nutrition was named Business of the Month for March by the Greater Shepherd Chamber of Commerce.

Slawson, who’s been a Shepherd resident most of her life, offers several different services: there’s a boutique that offers women’s and girls clothes, shoes and accessories; a tanning salon, which has tanning beds or spray tans available; and a dry cleaning business. The grand opening was delayed, Slawson said, because of damage done to the building during the severe winter weather, requiring remodeling.

At Relson Gracie JiuJitsu, owner Bruce McKinzie said he’s been open eight months, but has been teaching for 10 years.

He has been practicing the discipline for 16 years, but has been into martial arts for 38 years and holds multiple black belts. Currently, he has top belts in kenpo karate, taekwon do, jeet kune do, and kali, a Filipino martial art, to which he holds a rank of full instructor, the highest available.

McKinzie said he teaches jiujitsu because of his age and his retirement from competitive matches, and the art is less violent, but will teach other disciplines on a one-on-one basis.

“What I teach kids is to be bully-proof,” he said. “I teach students not to fight if they don’t have to, but to control the situation and holler for a teacher.”

OAKHURST — A dispute between family members left an Oakhurst man injured, and his uncle arrested on a charge of assault with a deadly weapon.

Tubbs allegedly discharged a 12-gauge shotgun at Wynne, hitting him in the neck.

Authorities found Wynne in the parking lot of Bubba’s convenience store in Dodge with an apparent gunshot wound to his neck. Walker County emergency personnel and a DPS trooper were dispatched, and the trooper provided medical aide while he questioned the victim, who said he was shot by his uncle who lives off Harrison Road in Oakhurst.

Reports indicate Wynne drove away from his uncle’s house after the argument, and ended up at Bubba’s. After treatment at the scene, Wynne was LifeFlighted to Houston for treatment.

In the meantime, San Jacinto County deputies arrived at Tubbs’ residence, where it was determined that Tubbs was standing outside when an unfamiliar pickup truck pulled into his driveway. Tubbs told police he was not familiar with the vehicle and could not see the driver or passenger.

The driver’s window came down, and Tubbs and Wynne continued an ongoing family dispute, reports state. It was then Tubbs reportedly discharged his 12-gauge shotgun loaded with birdshot in the direction of the vehicle.

Wynne was struck in the neck and face, and then drove away, reports state.

Sharpen said Wynne’s condition was unknown, but emergency personnel at the scene were confident the injuries were not life-threatening.

Tubbs was charged with aggravated assault with a deadly weapon, a second-degree felony. He currently is being held on an undisclosed bond.

This case is still under investigation and will be forwarded to the San Jacinto County District Attorney’s Office for further review. COLDSPRING — The Coldspring Chamber of Commerce honored the top businesses and organizations in the area, as well as its own volunteers, at its annual banquet on Saturday.

Chamber President Barbara Justice said that even though 2020 was an unprecedented year, the chamber and the county managed to make it through by learning to innovate.

“We figured out how to social distance, how to mask, and all the other COVID-19 precautionary measures,” she said. “Zoom became our secondary method of meeting, and email became our primary mode of communication.”

For the first time in memory, annual events were canceled; however, alternate arrangements were made for scholarships, however, Justice said.

“We had various sponsors, and were still able to give scholarships for students,” she said.

The first event attended in 2020 was the Christmas Parade, which was exciting as residents were able to get out of the house; there were more than 30 floats and more than 120 vendors, which put the town at max capacity, Justice said.

In 2021, plans are to have more in-person events, including lunch-and-learn events held monthly, she said.

Winners of the annual Best of Coldspring awards are: 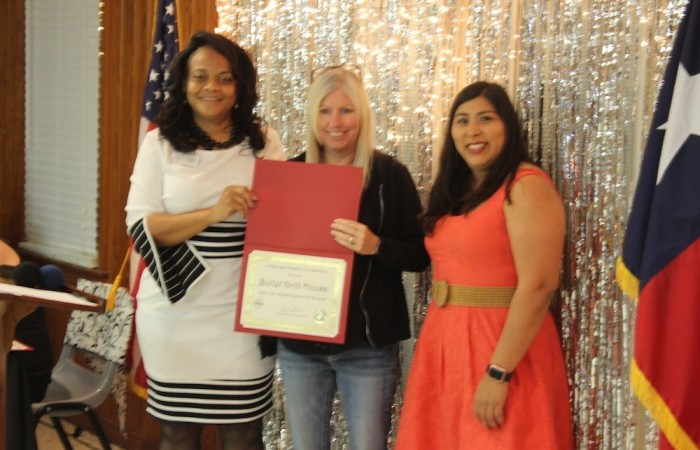 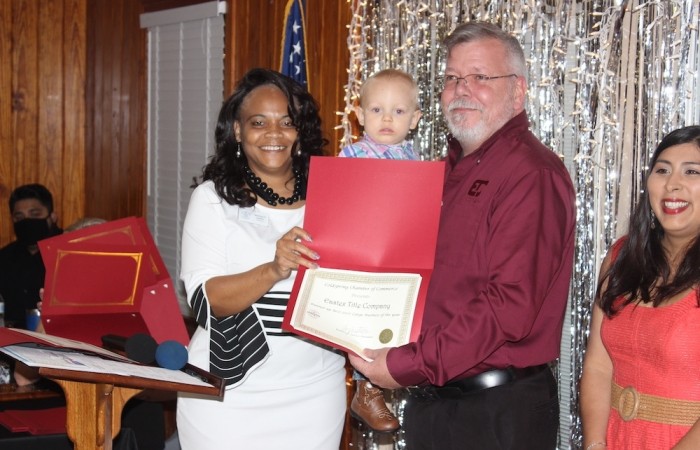 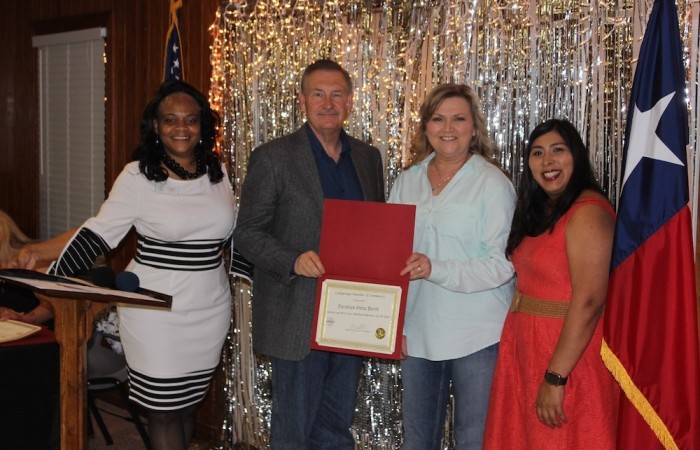 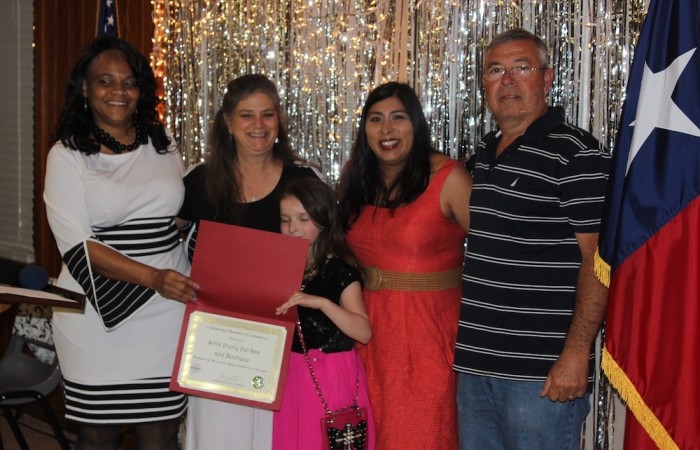 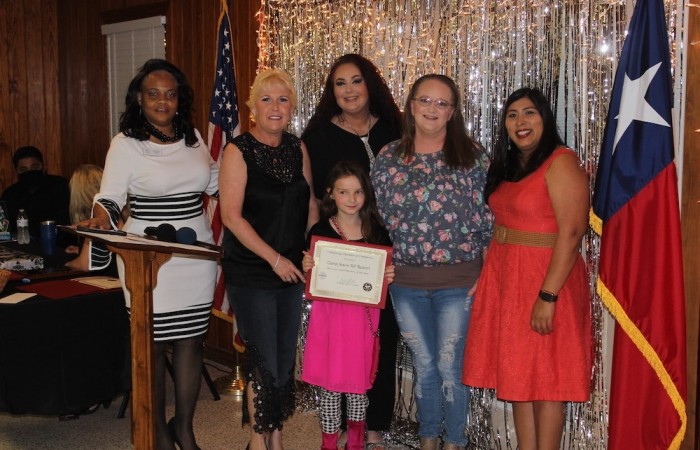 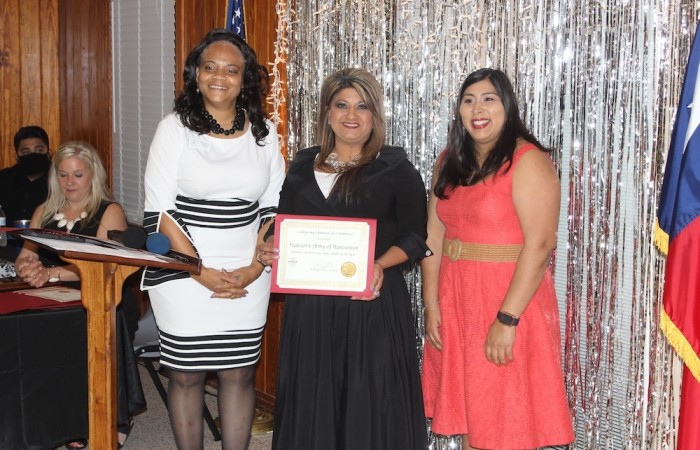 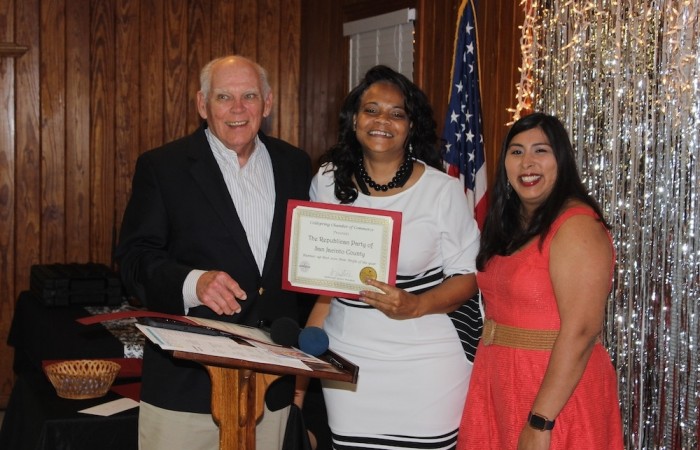 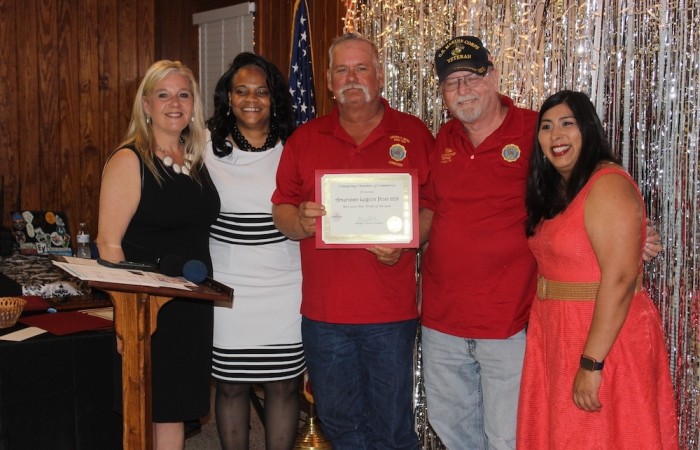 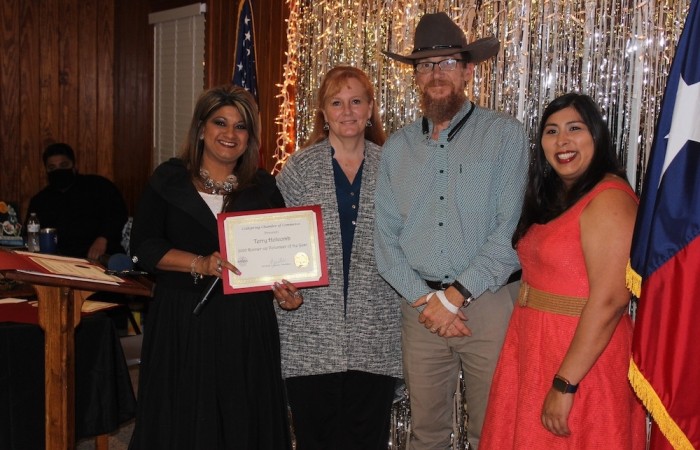 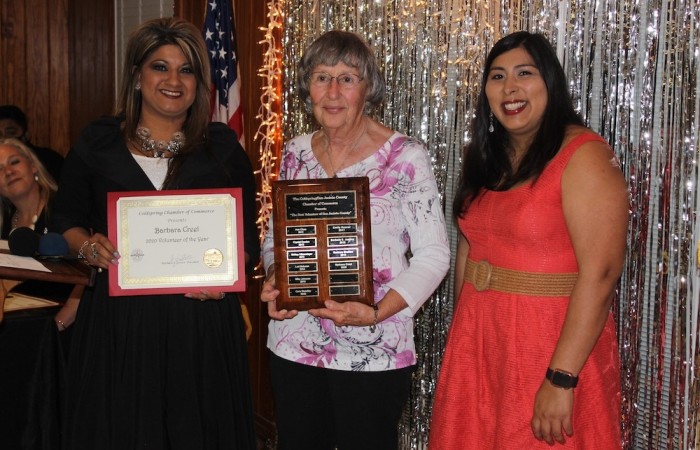 TONY FARKAS | SJNT Barbara Creel was first in Volunteer of the Year. (front) 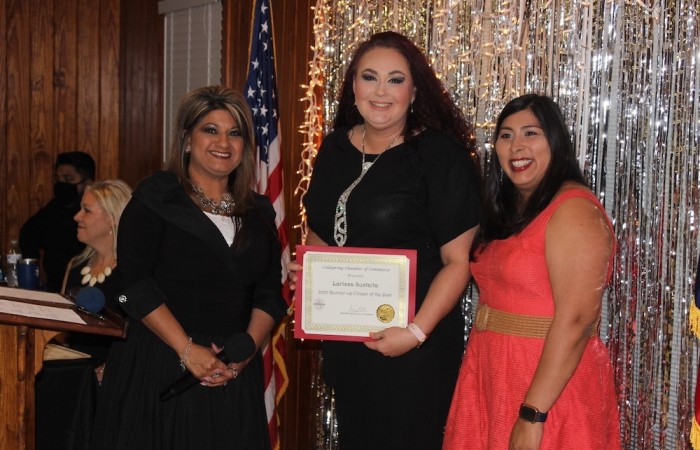 TONY FARKAS | SJNT Larissa Sustaita was second as Citizen of the Year. (front) 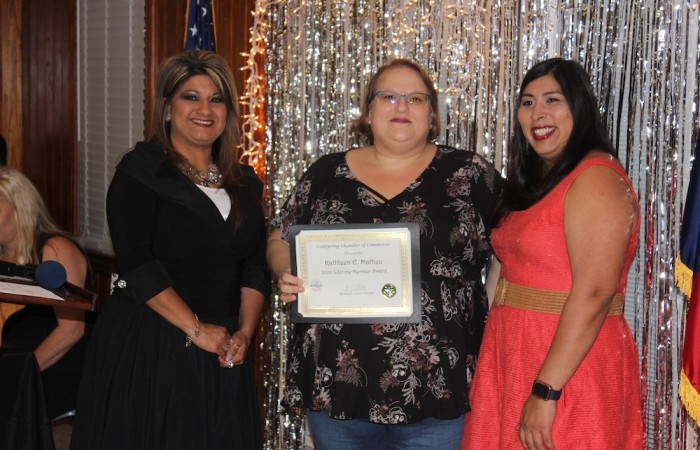 TONY FARKAS | SJNT The Lifetime Member Award, accepted by her daughter, was presented to Kathleen Matheu. 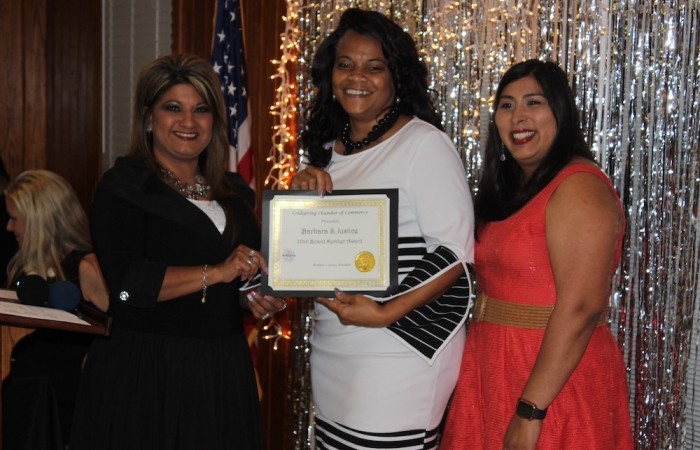 TONY FARKAS | SJNT Board Member of the Year was presented to Chamber President Barbara Justice.