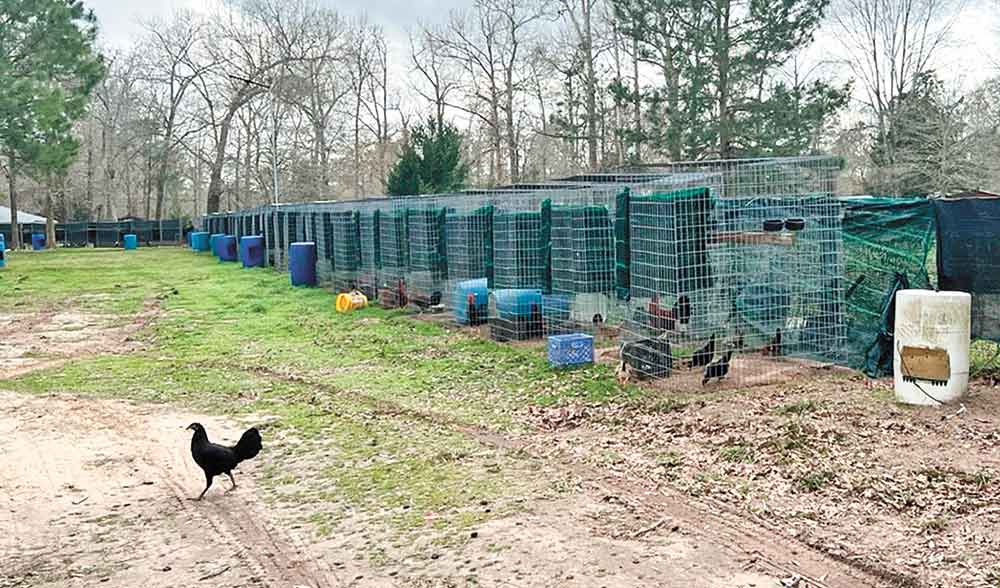 Some of the animals were kept in air-conditioned pens, others in wire cages. Courtesy photo

CLEVELAND — A raid on a cockfighting operation in southwest San Jacinto County resulted in numerous arrests and the seizure of thousands of dollars in property.

The raid Perry Lane in North Cleveland, which is in San Jacinto

was the result of months-long investigation.

Sheriff Greg Capers said that on Sunday, seven people, whose names are not yet being released, were arrested on charges of engaging in organized criminal activity. During the raid, officers seized about $20,404 in cash, a 2016 Kia sedan, a 2014 Toyota Sienna, a 2019 Mercedes van, and a 2018 Ram 3500 pickup.

Additionally, 12 roosters valued at $10,000 apiece were taken, along with thousands of dollars in stolen property.

Capers said that aside from it being against the law, the activity is intensely cruel to the animals, and since he raises cattle, he finds it reprehensible.

“There is no place in our society for such inhumane treatment of these innocent animals,” he said.

Capers said the birds are placed in an enclosed pit to fight for the primary purpose of gambling and entertainment with thousands of dollars being waged. A typical cockfight can last anywhere from seven minutes to more than a half hour and usually results in the death of one or both birds.

The birds have steel blades tied to their legs for the purpose of injuring or in most cases killing the opponent. Capers said gamecock owners themselves have been killed when accidentally slashed by their own birds.

Federal investigations have uncovered international drug cartels running sophisticated cockfighting operations as a means of distributing drugs across the country, he said.

More arrests are expected as the investigation continues.

According to information from the Houston Police Department, officers are investigating the fatal shooting of Adams, 62, who was transported to Memorial Hermann Hospital and pronounced dead.

The identity of the suspect, 35, is pending verification by the Harris County Institute of Forensic Sciences. He was transported to Ben Taub General Hospital where he was pronounced deceased.

“We lost one of our best. I don’t know what kind a monster would do such a thing,” he said. “He was a fine police officer, good-natured, as good a guy as you’d ever want to meet.”

Reports indicate that Adams, who was working at a second job apart from his duties in San Jacinto County, got into an altercation with the suspect at about 4 p.m. Wednesday. During the fight, the suspect took Adams’ weapon and shot him.

Adams was working security at PlazAmericas Mall on Bellaire Boulevard.

Two Houston officers, T. Salameh and M. Nasser, were dispatched to an assist, and upon arrival, were met by crowds of people exiting the mall stating that a black male wearing a blue shirt was involved in a physical altercation with an officer inside of a business, reports state.

The two Houston officers entered the mall and located the suspect coming from the second floor; the suspect was wielding a knife, reports state.

Salameh and Nasser attempted to get the suspect to surrender, but the suspect refused to comply and then charged at the officers.

The two officers discharged their duty weapons, striking the suspect, who fell, got up and attempted to flee. Officers then used a taser, causing the suspect to fall to the ground, reports state.

The suspect continued to resist but officers eventually were able to place him into custody. Paramedics then transported the suspect to the hospital, where he was pronounced dead, reports state.

Officer Salameh was sworn in as an officer in May 2020 and Officer Nasser in February 2020. Neither officer was injured.

“Our hearts are broken; God has prepared a special place for him,” Capers said. He was a great guy — he was an up-and-comer, as was his wife; they were bound to do good things in this county.

"Our hearts are with the family of Deputy Constable Neil Adams, who passed away (Wednesday) evening in Houston while working an off-duty security job at a local mall," Abbott said. "We are grateful for the dedication of our law enforcement officers who are committed to keeping us safe, whether on or off duty, and their immeasurable sacrifices are not lost on us.

“The State of Texas has offered assistance and support to the City of Houston as they investigate the shooting,” he said.

Precinct 1 Constable Roy Rogers said Neil was a conscientious officer, took care of job and was a people person.

The investigation will continue. 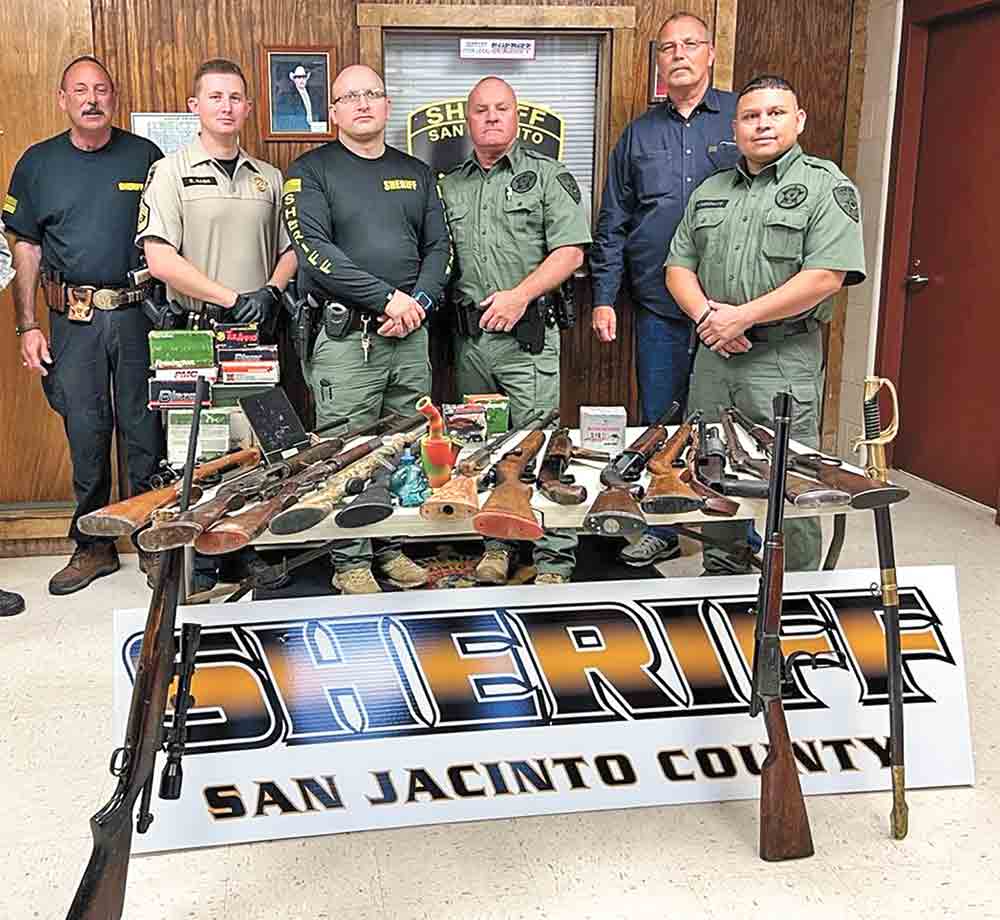 Numerous rifles and other weapons, as well as ammunition, were taken during a raid Thursday. Law enforcement personnel at the federal, state and local level participated in the investigation.

SHEPHERD — A multi-agency investigation has led to the arrest of one man believed to be responsible for numerous thefts as well as one suspected of selling narcotics in the area.

Justin Hope, 38, currently is being held in Polk County Jail on numerous charges, and will be transferred to San Jacinto County Jail at a later date.

Kean said that this cache of weapons, many of which are more than likely stolen, along with a collection of a variety of drugs and paraphernalia with an estimated street value of $100,000, could have reached the streets of the county within hours.

Sheriff Greg Capers said that other suspects have been identified and are being sought as well.

Capers said federal, state and local agencies were involved in the investigation.

If you believe that you are a victim of one of these crimes, contact Detective Montaleo at the San Jacinto Sheriff’s Office at (936) 653-4367. 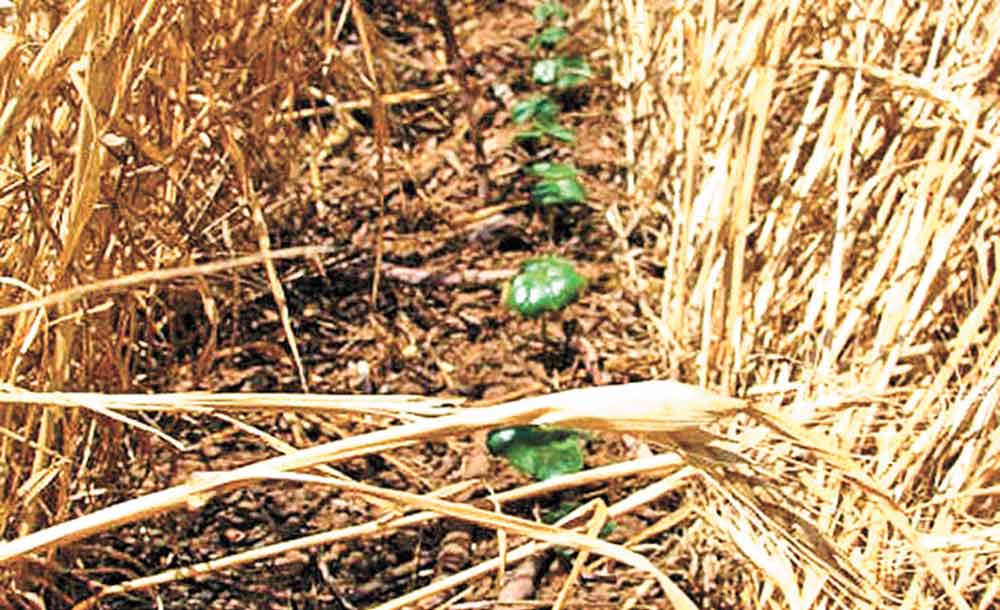 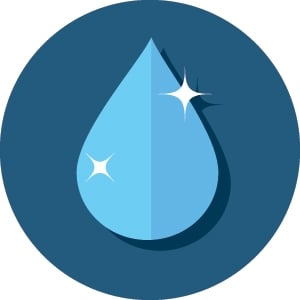 CLEVELAND — After 22 years farming produce about 50 miles north of Houston, Van Weldon found himself, with neighboring farms and families in a battle to keep ground water pristine.

With the Sam Houston National Forest being the natural cleanser for shallow groundwater wells in the area, the question of water quality for irrigation and drinking has never been an issue. However, a group of investors is seeking permission to build a landfill facility nearby.

The landfill — Peach Creek Environmental Park — is to be located about 7 miles northwest of Cleveland.

The Mississippi-based owners have a permit request in front of the Texas Commission on Environmental Quality, to be built on land abutting that owned by Weldon for the Wood Duck Farm.

Area residents began researching implications that come with a landfill, such as smell, water contamination, traffic congestion and road deterioration, as well as what other farms in different parts of Texas did when a landfill attempted to move into their neighborhood.

One such issue involves the possibility of up to 300 garbage trucks each day traveling to the landfill, past some of Weldon’s strawberry fields. The Food Safety Modernization Act, however, points out that “there have been far too many foodborne illness outbreaks possibly linked to pre-harvest agricultural water in recent years, including water coming from lands nearby produce farms.”

Another issue is wildlife, specifically seagulls, which are attracted to landfills for the easy food access. Weldon said that birds are so prevalent at landfills, and a risk for airplanes, that federal laws prohibit landfills being built near airports.

He pointed to studies about the impact of birds on farms, which would be significant, and detrimental to his fruit gardens through contamination.

Water contamination also is a huge concern, Weldon said. Storm water runoff could be a potential source of pathogens, and under certain conditions, the landfill will be able to discharge leachate from storage tanks into the nearby Jayhawker Creek, which drains into Lake Houston.

Weldon said no laws prevent landfills from being placed near national forests or in floodplains.

“You’ve heard the phrase putting lipstick on a pig? Here’s a good example,” he said. “These investors are taking a sour real estate deal and turning it into a landfill.”

Weldon and others have sought help from numerous agencies over the past few months, including the Texas Farm Bureau, area legislators, and even the San Jacinto County Commission.

Weldon said he even gave a speech  in which he exhorted Gov. Greg Abbott to help him and other area landowners in their quest; according to his research, landfill permits in Texas have a 94 percent approval rate.

“One reason for this high approval rate may come from the strong ‘solid waste lobby’ that helps keep state legislation in Austin ‘waste disposal industry friendly,’” he said.

Weldon said that his goal isn’t to shut down the landfill, but to urge the company to seek a more suitable site.

“We realize that landfills are necessary in today’s world, but we think that a better location exists,” he said. “Whether you’re a tree hugger or a deer hunter, this landfill location just doesn’t make any sense. So far, almost 2,000 public comments have been sent to the TCEQ, not one public comment speaking in favor for the landfill.”