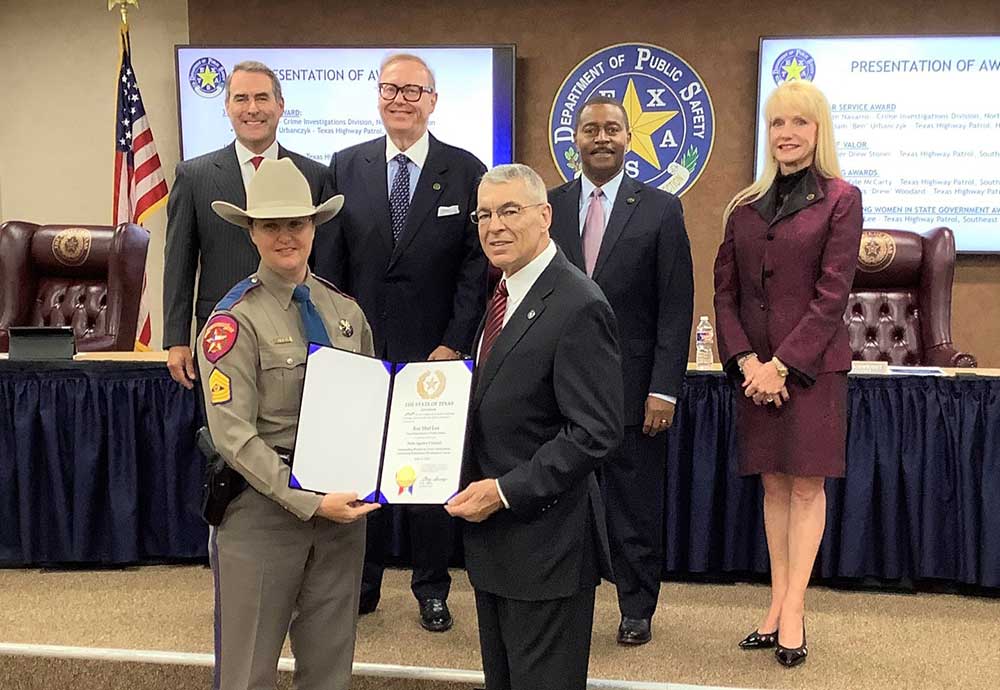 AUSTIN — The Texas Public Safety Commission along with Texas Department of Public Safety Director Steven McCraw presented one Medal of Valor, the highest honor and award bestowed by DPS, two Lifesaving Awards and two Director’s Awards to department personnel at the PSC meeting on Aug. 12 at DPS Headquarters in Austin.

The Outstanding Women in State Government Award also was presented.

“These awards exemplify the bravery and dedication that our employees exhibit on a daily basis within DPS,” said DPS Director Steven McCraw. “I’m pleased to recognize each of these men and women for their service and commitment to the state of Texas.”

The award was created by the State Agency Council, which hosts the Outstanding Women in State Government Awards every two years. The 2020 awards ceremony was postponed due to COVID-19.

Lee is recognized by DPS and the court system in Texas as a subject matter expert in crash investigation and reconstruction. She is the second female in DPS history to serve on the Department’s State Crash Reconstruction Team.

Additionally, she is an instructor, a field training officer and has taught hundreds of DPS recruits, Troopers and officers from other law enforcement agencies. Lee is widely respected for her skills and abilities, as well as serving as a mentor and exceptional role model for all women in the law enforcement profession.

Additionally, the following individuals were recognized:

As he looked through the front door, he saw the suspect in the hallway with a weapon. Stoner shouted commands, startling the suspect, and the man complied with the order to drop his weapon and lay on the ground.

Stoner approached the man, kicked the gun away and apprehended him. He then assessed the house and found a female with a gunshot wound. Stoner was able to provide medical assistance to the woman until EMS arrived. The male victim in the driveway did not survive.