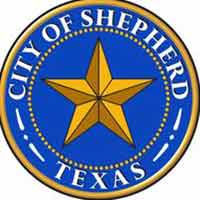 SHEPHERD — At a special study session on June 22, the Shepherd Board of Aldermen began setting priorities for the grant funds the city received, as well as discussed proposed projects that may end up being funded in an alternative manner.

City Secretary Debra Hagler said that while no action was taken at the meeting, the city began focusing on smaller projects that can be completed quickly, such as sewer lines and streets that have no infrastructure running beneath them.

“It was only a brainstorming session,” she said.

Financial advisor Bill Blitch offered some resources to the board, which could provide the city with low interest loans, as well as discuss issuing certificates of obligation for some immediate funding.

The city of Shepherd received a $4.2 million grant in May, and hopes to shore up the city’s infrastructure, particularly relating to water, wastewater and storm drainage.

More detailed information can be found at the city’s website, www.shepherdtx.org.