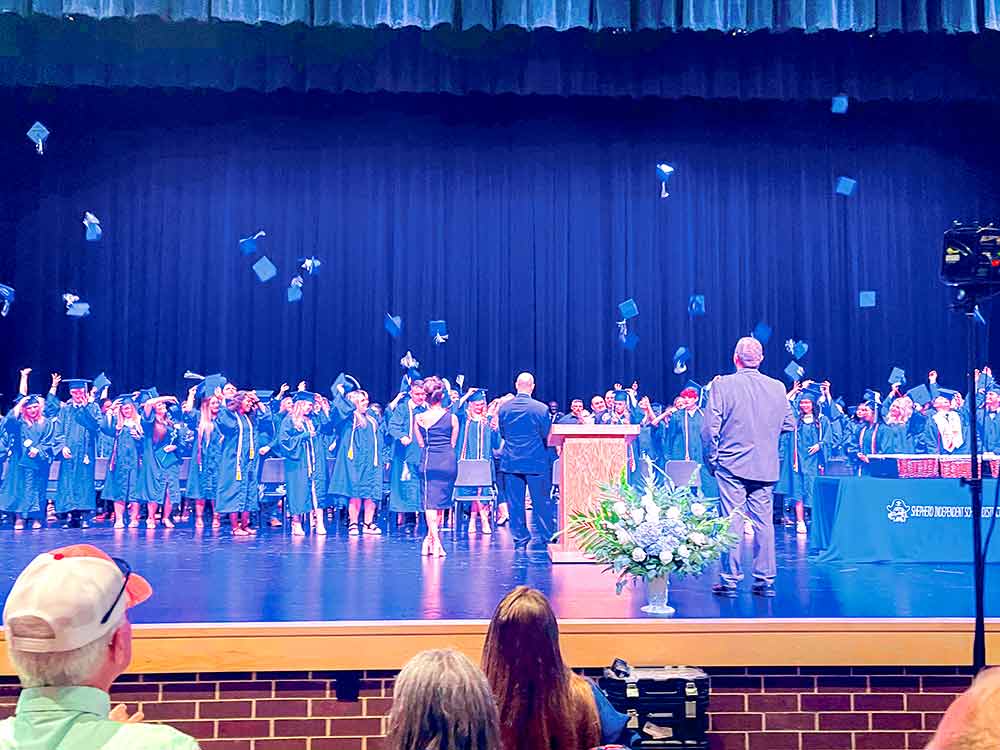 Shepherd High School graduates toss their caps in their air, marking the end of their high school careers. Courtesy photo by Michelle Cones-Minton

WILLIS — In a year plagued by pandemic-related setbacks, the Pirate Class of 2021 had one more final hurdle before crossing the stage — and that was cross the county.

With recent rains making the field unusable, according to Facebook comments made by Superintendent Jason Hewitt, the call was made to move graduation from the district stadium to the Willis ISD Performing Arts Center due to continued concerns over weather.

With limited seating concerns, graduating students were allotted eight tickets each to give to family members, with the district also live-streaming the event for those unable to attend.

Salutatorian Diane Vasquez addressed her fellow students and with a heart-felt speech detailing the ups and downs of their school years together and future decisions ahead of them, ending her speech by quoting Rep. Corey Booker: “Real courage is holding on to a still voice in your head that says, ‘I must keep going.’ It’s that voice that says nothing is a failure if it is not final. That voice that says to you, ‘Get out of bed. Keep going. I will not quit.” and leaving the other presenters to hand out awards to the remaining seniors.

Several other students spoke following, giving historical recollections of the class’ shared memories and others thanking teachers and staff, with Valedictorian Sara Jimenez-Gomez extending a thank you to her mother in Spanish.

After sitting on stage, the group finally stood for one last event together, tossing their graduation caps in the air and leaving each other one last time, looking ahead to their futures.