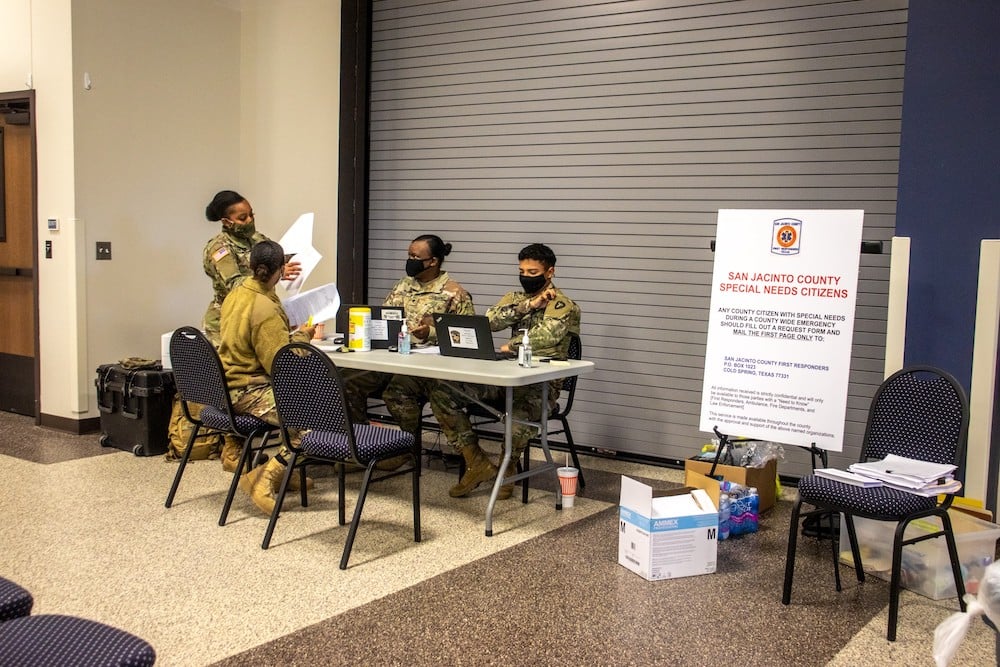 EMILY KUBISCH-SABRSULA | SJNT Sergeant Rachelle Thomas and her team of medics and administrators teamed up with the San Jacinto County’s Office of Emergency Management to keep the clinic running smoothly, with 105 doses administered in the first day.

COLDSPRING — Last week, San Jacinto County was the first of 26 counties in Texas to implement the Save Our Seniors vaccination program, meant to get the first round of the vaccine into the arms of the county’s older citizens.

Volunteers, who have already been working to assist with distribution at the Brookshire Brothers, along with Army medics, worked side by side to administer the allotted 200 vaccines, with 105 doses of the Moderna vaccine being used in the first day at the Coldspring Emergency Shelter.

Medics also drove around the county to give the first dose to those who are homebound, with officials in the Operations and Emergency Management office calling residents in the county to make sure they were aware of the free program.

The initiative was originally intended for those 75 and older with an appointment, but volunteers moved to contact those 65 and older on the second day as to not waste any of the vaccines, which must be kept refrigerated.

Among those assisting the San Jacinto County OEM office in distribution was Sgt. Rashelle Thomas and her team of certified medics and administrators, who are based out of Lufkin and will continue moving around East Texas to assist in distribution, including in Shelby and Panola county.

“The volunteers and the town are awesome, and we just enjoy all the people we’ve gotten to work with,” she said.

The county, which has been holding vaccination clinics through several outlets prior to last week’s event, claims luck had a small part to do with why the county was chosen as the first to pilot the program, which was put together in less than a week.

“The first day was a little hectic, but we’ve had a steady flow of participants and it’s gone smooth,” SJ County Judge Fritz Faulkner, equipped with a mask, said. “This has really been a blessing.”

Other factors, as stated on the governor’s website, include vaccination rates among seniors and total vaccine allocations over the past three months.

Participants will need to return approximately three weeks after the first shot, as indicated on their form. Those who have received the vaccine are encouraged to continue wearing masks in public and practicing social distancing, as indicated on the CDC website.

While the vaccine has been proven effective in reducing symptoms, specifically those that lead to hospitalization, it’s ability to reduce spread is still being monitored.