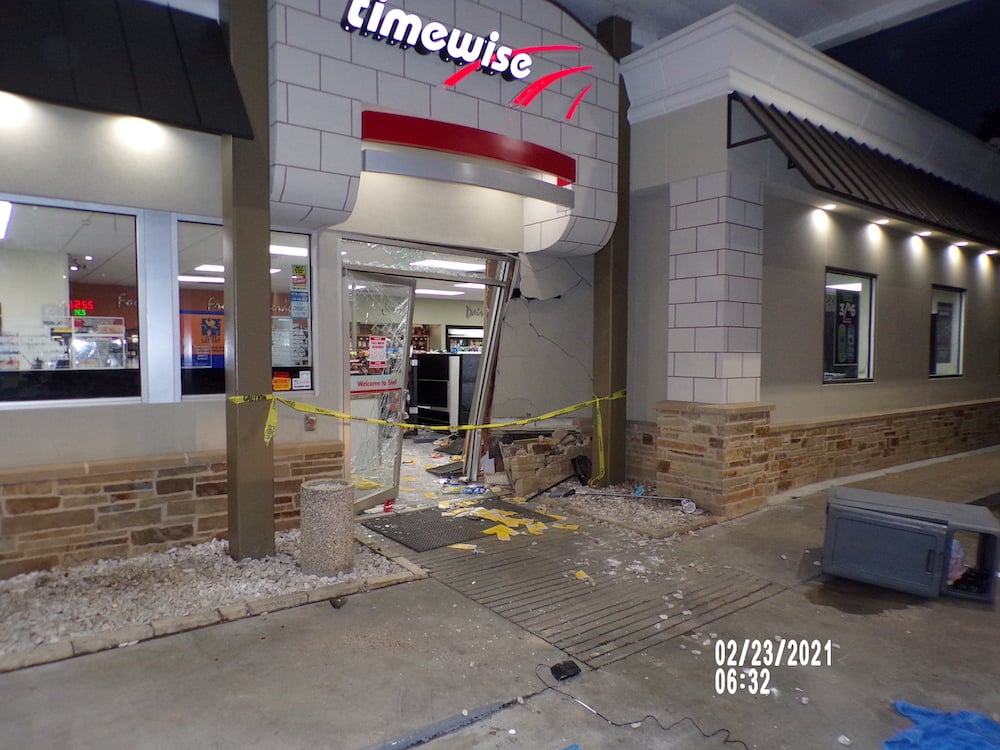 PHOTO COURTESY OF SAN JACINTO COUNTY SHERIFF’S OFFICE The entrance to the Timewise convenience store was damaged Feb. 23 after a group of men rammed it with a pickup truck in order to steal the ATM inside.

SHEPHERD — San Jacinto County law enforcement officers are seeking the identification of a group of men believed responsible for the Feb. 23 break-in at the Timewise Convenience Store near Shepherd.

Records show the clerk inside, who was not named, noticed a pickup truck that contained several African American males with hoodies, who then sped up and backed into the store, striking the ATM machine.

“There were five to six black males wearing masks and gloves, and not wearing COVID masks,” he said. “They knew what they were doing — they had planned this out. This wasn’t something spur of the moment.”

Sharpen said the clerk held their hands up throughout the robbery.

The suspects loaded the ATM into the truck, which was identified as a stolen Dodge Ram 1500, and took off, heading into the town of Shepherd on Pine Street, reports indicate.

Sharpen said a witness observed a bunch of debris on the roadway, and saw the pickup in the ditch, which apparently had crashed during its getaway. The witness saw males running around the vehicle, looking confused; however, the suspects had another car with them — a small dark colored 4-door vehicle — which picked up the suspects and fled the scene.

The pickup truck, as well as several sets of gloves and masks, were recovered and are being processed for evidence. Additionally, the ATM was left in the back of the truck, and was recovered and turned over to the company that owns the ATM.