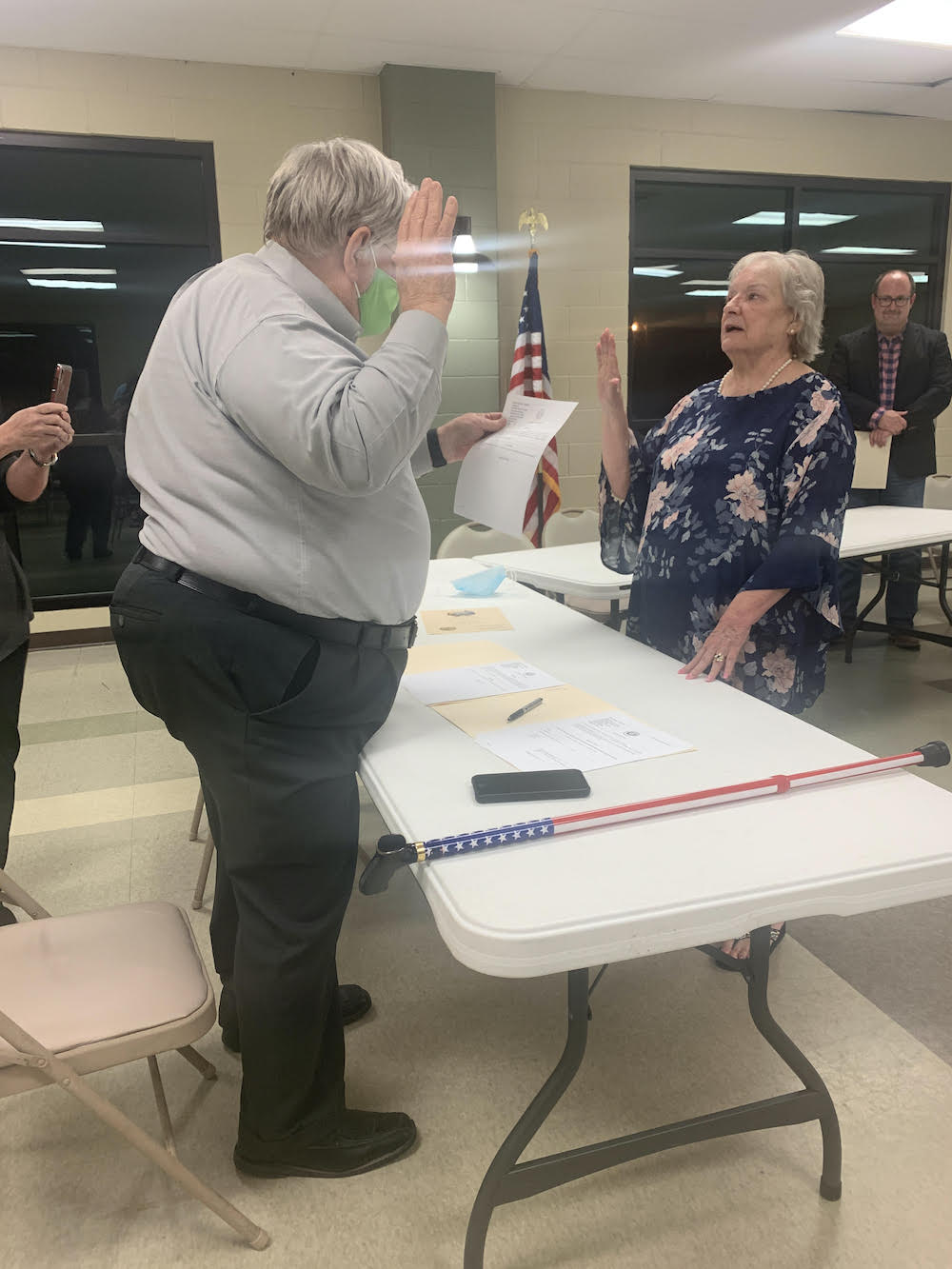 EMILY KUBISCH-SABRSULA Yvonne R. Cones gets sworn in as a city alderman following the Nov. 3 elections.

SHEPHERD - Brenda Myers, Executive Director of the Impact Center in Shepherd, addressed the council regarding ordinance violation fees she had received while trying to build a free-standing restroom near the center.

Myers, who is being fined for failing to obtain a building permit which would ensure the structure is up to ADA standards, (a water and electric permit had been obtained prior), claimed she was given bad information when she asked what permits she would need. Per city ordinance, buildings that have not obtained all proper permits prior to construction will be fined double the original cost. Myers, along with several members of the crowd, pleaded with the council to drop the violation fees.

After several minutes of discourse, a vote to dismiss the fine was reached, with the possibility of having the Shepherd Economic Development Cooperation (EDC) determine if they are able to help with the permit fees, since the restroom may serve public use. The Impact Center, located in Shepherd, is a 501c3 non-profit that provides relief programs to several surrounding counties.

At 4:30 p.m., shortly before the Tuesday monthly council meeting, election results for the City of Shepherd were certified, with Mayor Charles P. Minton serving his second term as Mayor, unopposed. Lee “P.K.” Wesley Jr., who had won a majority of the votes and was set to take on an alderman position, was discovered to be ineligible to hold the position due to an old conviction on his record.

Despite having served his term and taking care of all associated matters, according to Texas Election Code, a felony conviction leaves individuals unable to hold public office without a governor pardon, something the board and Wesley did not know until after the election. Since the offense occurred in Louisiana, he would need a pardon from that state’s governor to serve in Texas.

The city’s attorney, Larry Foerster, spoke with the Secretary of State in Texas in an attempt to find a legal way that would allow Wesley to serve, citing overwhelming support from his community as a testament to his character, but was unable to find an initial solution. With two positions open for city alderman, Yvonne R. Cones will fill one, and if they are unable to find a course of action to instate Wesley, a special election will be held to fill the second.

Both the legal entities for the city and Wesley encouraged the audience to reach out to representative Earnest Bailes and Robert Nichols to try and change the current law that makes felons ineligible to hold public office.

With money left over from not holding a July fireworks ceremony, the Chamber of Commerce and Impact center are seeking to combine their holiday events for a Christmas fireworks show and parade on Dec. 5 with the parade starting at 6 p.m. Two job vacancies will be posted to the city’s website, one for a temporary front office position and the other for the public works department.