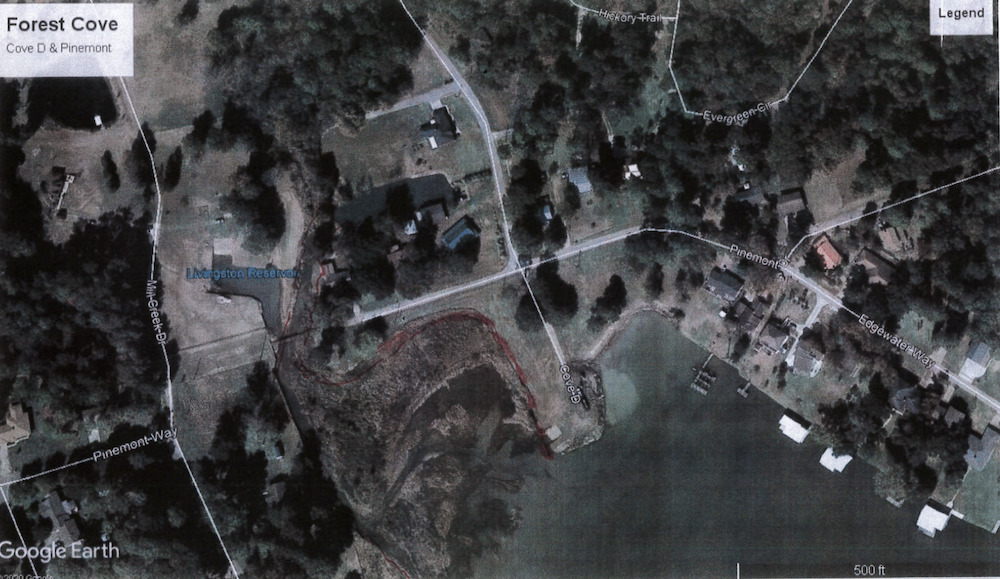 Courtesy photo - 2020: A Google Map view of the Forest Cove subdivision from the year 2020.

The issue regarding Forest Cove is its drainage. The subdivision was platted in 1979.

“The drainage has been happening since it was first platted,” Point Blank Mayor Mark Wood said. “Forest Cove has a rough infrastructure where the roads are not in good shape. You’ll see that throughout the city.”

Wood and other council aldermen are going to research the problem before coming to a consensus on what to do. The decision could be made by next month’s city council meeting, which will take place at 6:30 p.m. Dec. 14.

The sales tax revenue compensation for the month of October was $8,284.01. Wood doesn’t know if these types of numbers are permanent or temporary though.

“We made money during Covid because the people who own lake houses either moved up here or spend more time here,” he said. “I don’t know if the growth is permanent, but you don’t see houses for sale. It’s an interesting phenomenon that I didn’t anticipate.”

Wood also discussed how the city determines how much money to spend on street repairs per subdivision. He also talked about the outdated POA assessments.

“The POAs were set up in the 1970s and they have never upped their assessments,” Wood said. “There’s not a property tax base in Point Blank either. What we do is set a budget for what we think we can spend on streets for the fiscal year. We had a really good year last year and we try to spend it based on the percentage of miles in each subdivision.”