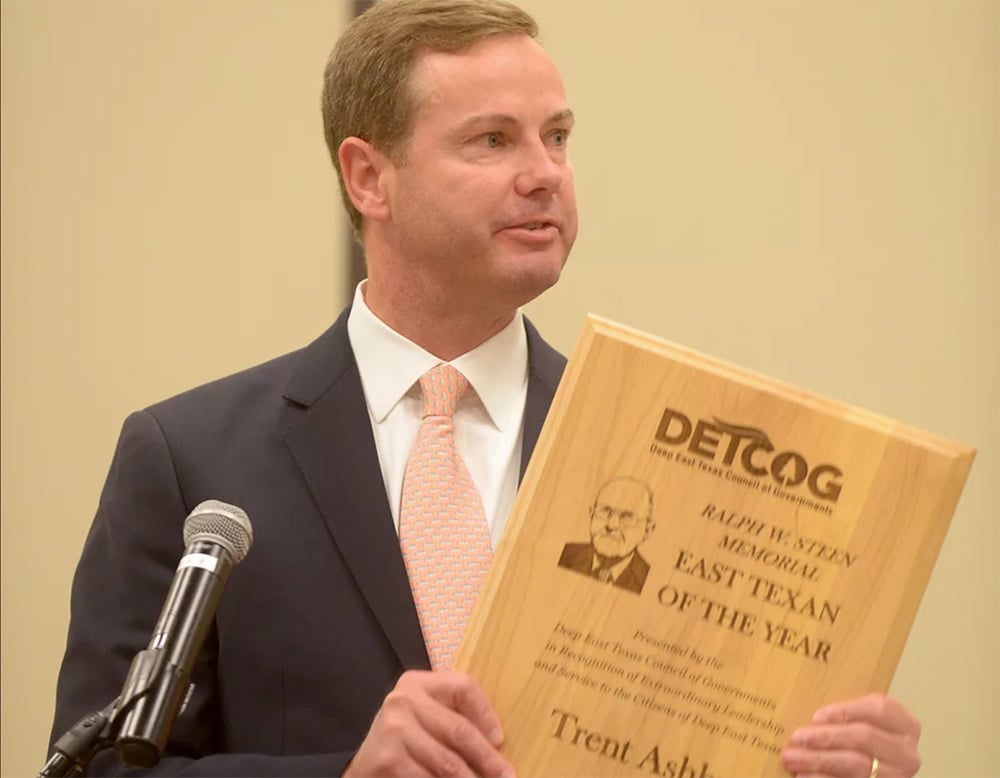 Rep. Trent Ashby responds after being named recipient of the Ralph W. Steen East Texan of the Year Award during the DETCOG Annual Meeting and Awards Luncheon on June 23rd at the Pitser Garrison Convention Center in Lufkin. Courtesy photo of DETCOG

LUFKIN — State Rep. Trent Ashby, R-Lufkin, was named East Texan of the Year for 2022 at the annual meeting of the Deep East Texas Council of Governments held June 23 at the Pitser Garrison Convention Center in Lufkin.

The award was presented by State Sen. Robert Nichols, R-Jacksonville, a recipient of the honor in 2014.

“The person we are honoring today, while still a young man, has already made a huge difference in the lives of East Texans,” Nichols said. “We live in a time when politics often divides us. But this man has risen above that. He is one of those rare individuals who has demonstrated the ability to stay true to his core beliefs and principles, while at the same time finding common ground with others — often working across party lines for the greater good of all Texans.”

As an example, Nichols said that Ashby authored House Bill 5, known as the Texas Broadband Bill, in the 87th Legislature and passed it on a vote of 146-0 in the House. Nichols carried the same bill in the Senate and the two worked together to ensure its passage.

Ashby has received numerous accolades since he was elected to the Legislature a decade ago. He was the Republican Caucus Freshman of the Year, Capitol Insider’s Most Valuable Sophomore, and has been named to Texas Monthly’s Ten Best Legislators list. He was honored as the Deep East Texas Legislator of the Year in 2017.

In an emotional acceptance, Ashby cited previous winners of the Steen Award. “To be affiliated with that group — I’m not sure I deserve this, but I’m touched and honored to accept it,” he said.

This marks the 47th consecutive year DETCOG has presented the Ralph W. Steen East Texan of the Year Award. In 1976, Dr. Steen was retiring after 20 years as President of Stephen F. Austin State University. To honor his contributions to the region DETCOG presented the first East Texan of the Year Award to him and then decided to make it an annual presentation in his honor.

DETCOG was established in November of 1966 as an Economic Development District under the U.S. Department of Commerce Economic Development Administration. In 1968 the organization also became a political subdivision of the State of Texas as a Regional Planning Commission under state law. Current membership includes 11 counties, 34 cities, the Alabama-Coushatta Tribe of Texas, plus a number of other entities including school districts, river authorities, special purpose districts, and sustaining members. a