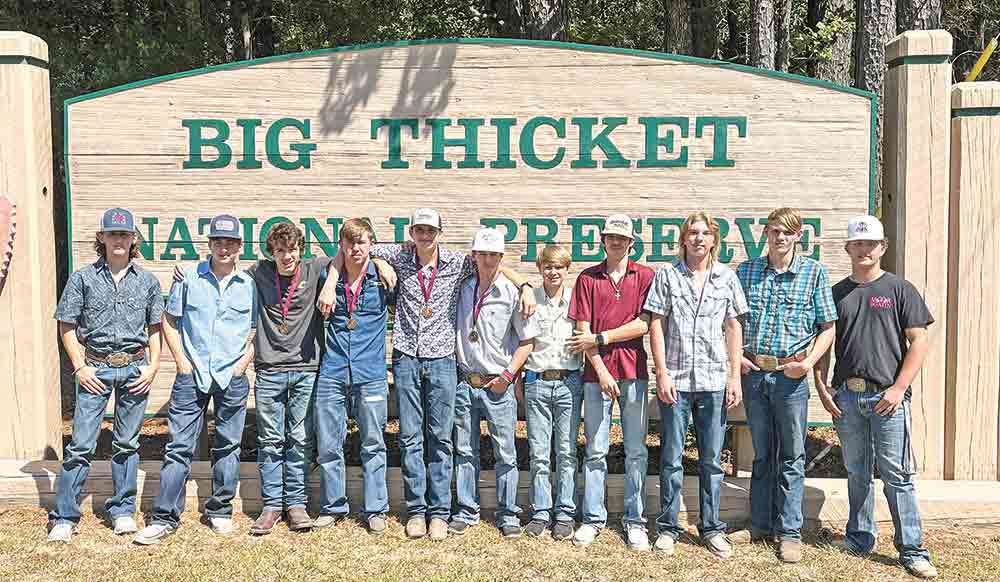 The eight-part competition requires students to identify plants and animals that are native to Texas, determine the proper management of property to improve wildlife habitat, and take tests on Texas Parks and Wildlife Game Laws and hunter/boater safety.

“The team of Colton Bailey, Mason McGlaun, Cinco Bailes, and Zachary Hamilton placed third in District and fifth overall for the contest,” Rudloff said. “There were 16 teams in our district and 40 teams in the overall contest from 1A-6A schools.

“All of the students did really well in the contest and learned a lot about Wildlife Management and Conservation,” he said.

COLDSPRING — The city of Coldspring will seek funds to improve infrastructure within the city limits and passed items at its regular meeting on Oct. 3 as part of that effort.

Mayor John Benestante said that the items, such as adopting a resident participation plan, procurement policies and financial payment procedures for a Community Development Block Grant-Mitigation Method of Distribution, which is required by federal law.

The grant funds, which is offered through the Texas General Land Office, will be used to provide first-time sewer service to low- to moderate-income households that currently do not have any.

Benestante said the grand will allow the city to install trunk lines in an effort to cover the city’s needs.

•approved all posted bills for Inframark, including replacement of pumps, which amounted to $44,000;

•discussed sales tax receipts, which are higher than forecasted at 108 percent for the third quarter;

•approved the FY 2021 audit which catches the city up on all audits;

•discussed opening bids for design of a new concession stand for the youth ballfields;

•discussed a study to be done by TxDOT on the two major roads through city, FM 2025 and 150, both of which run in front of schools;

•discussed the finished paving of the city’s two projects for the year — Reese and Pine streets — which was done with thicker asphalt to help the roads last longer;

•reviewed an RV park ordinance; and

•approved hiring Axley and Rode for the 2022 audit.

COLDSPRING — The elected officials of San Jacinto County will not only get a hefty raise for the coming fiscal year, as well as an increase, or in some cases added, in travel allowances.

Gerald Deeter, speaking at the grievance hearing on Oct. 4, said he was concerned that the raise was approved away from the public eye, as well as the work hours and accountability of the commissioners.

Ray McCoppin said he was concerned about the elected officials receiving raises, not so much the hourly rate but the increase in car allowances.

Other residents complained about the seeming lack of transparency on the part of the county in pushing through the raises in the budget.

Commissioner Laddie McAnnally told  the committee that while travel allowances were added or increased, mileage reimbursements were removed.

County Judge Fritz Faulkner said the county is trying to address pay inequities and employees retention, as many departments were seeing employees leave because of poor pay and rising costs of living.

Speaking in favor of the raises, Judge Greg McGee said as things stand now, his clerk makes a higher salary than he does.

The vote was unanimous, meaning the raises will be allowed and will not require any vote by the County Commissioners’ Court.

At the Sept. 21 meeting, residents berated the court for voting themselves a $6,240 raise at the last budget session, saying commissioners already make $66,000 for 32 hours a week of work, since the commissioners don’t have to punch a timeclock.

Additionally, the salary schedule that did not reflect raises was published as per state law, and residents felt those raises should be rescinded.

Faulkner said in the original budget proposal, there was no money for raises; however, the Sheriff’s Office obtained a contract for housing other counties’ prisoners, which will generate enough revenue to allow for raises.

He also said that auditors felt the raises were not handled properly, and the court discussed the matter with several entities, including the District Attorney’s Office and the Texas Association of Counties, and the recommendation was to form a grievance committee, since those raises are now in the final budget.

The letter states that Texas Law requires prior published notice of proposed raises for elected officials, and that those raises could not be paid out. However, the law also states that the commissioners could appeal that decision through the grievance committee.

“Sometimes I wonder if I’m actually in San Jacinto County, and I wonder if the County Treasurer has a money machine the way the commissioners spend money,” he said.

Deeter said the county should consider pooling its equipment instead of outdoing each other in purchases.

The county did approve the purchase, saying the price difference was because the truck in question had specific add-ons that raised the price.

Ray McCoppin said the county isn’t following its budget, and five days into the new fiscal year the county will be looking at budget amendments.

•approved the rehire of James Brooks at the San Jacinto County Jail;

•tabled a donation of land from Steve Beshear;

•approved a fee of $150 for all maintenance done on cell towers, due to change in flood plain maps, with County Judge Fritz Faulkner voting against the measure;

•declared road equipment as salvage to be sold by Rene Bates Auctioneers;

•approved contracted services and materials bids for the Road Department;

•approved spending $1 million grant funds through the American Rescue Plan Act on Courthouse renovation and $450,000 for each road district for paving projects;

•approved an $86,072 change order for Timberline Construction on the county’s Innovation Center;

•accepted the donation of a 500-gallon oil tank from Shannon West;

•approved the renewal of worker’s compensation plan; and

•approved issuing a notice to proceed on the Innovation Center. 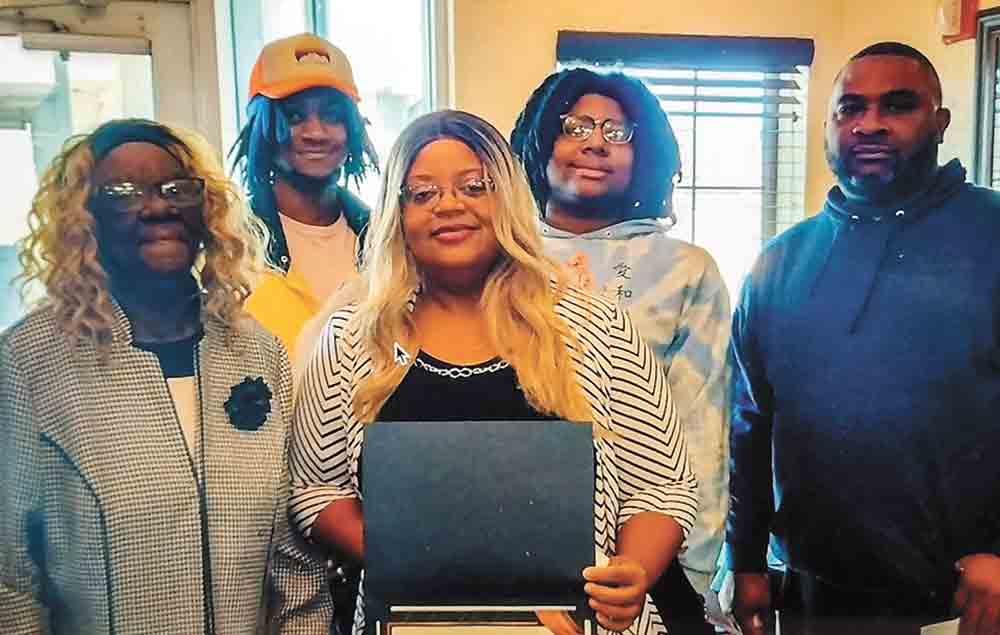 To celebrate the 18th anniversary, The Community & Children’s Impact Center will hold a special fundraiser on Nov. 11 and 12. Cook Off and Cornhole for the Children will start on Friday.

On Friday at 4 p.m. the cook teams will check in. Celebrities will be there to mix and mingle and to sign autographs. Bring something with you for them to sign on. The auction will be Nov. 12 at 2:30 p.m. Come and buy barbecue and help fund the Impact Center and its work for the youth of our area.

Connect with Brenda Myers, Executive Director of the Impact Center, at (936) 499-2632. I will post more information in the coming weeks. The Impact Center is on North Byrd Avenue in Shepherd next to the Court Annex. Visit their wonderful resale shop, too.

•Another barbecue fundraiser will be held at Coldspring Republican headquarters on Oct. 22. Enjoy pulled pork sandwiches ‘with slow smoke cook’. Add all the fixings , chips and a drink and you are set for a good meal.

•Our area is now hosting farmers markets in Coldspring and Shepherd. Shepherd has a once monthly Liberty St. Farmers Market on Oct. 15-16 on North Liberty, at the park next door to the library and the fire station. This market is held every third week starting at 9 a.m. Come and enjoy produce from local farmers and artisans, their motto is “ Homemade, handmade, homegrown.”

Coldspring has a Farmer’s Market Plus store, open twice a week on Tuesday and Saturday from 9 a.m.-2 p.m., and of course are also present on Tradesday in the Courthouse Square. Everything from fresh eggs to homemade baked goods to leatherware is for sale.

•On Saturday, Paradise on the Square held an artist and artisan show of work by local artists. Jewelry, beaded hangings and paintings were on show and much more. One stall showcased the stained-glass work of Peggy Sweet.

I asked Peggy how long had she been creating the beautiful works of art around her. She said 5 years. She told me she had a serious accident then when she fell off a stage and broke both her legs and more. Since she couldn’t move, she decided to take up art. The result is many beautiful works of stained glass on show. Contact Peggy at Window Sweets, text to (580) 504-4100.

•Do not forget Wolf Creek Car Show on Oct. 15-16 at Wolf Creek Park. This event, hosted by Coldspring Chamber of Commerce, is already well booked with vehicles and vendors. If you would like to advertise your business with promotional goods, the Chamber gives out 250 goody bags to entrants and vendors. Call if you would like to donate your business items, pens, koozies, etc.

Shepherd Library will have a booth at the Car Show. Have a lucky spin on their Wheel of Fortune and have a large button made specially for you. Bring a photo or logo to be featured on your button which are $2 each.

•Shepherd Library is having to shorten its hours for the next week or so due to illness. We look forward to seeing Director Terri Macintyre back in the library soon. the library will hold a financial literacy workshop from 6-8 p.m. on Oct. 11. This interesting interactive talk will focus on building savings and wealth.

•First Baptist Church in Shepherd have a program called Fantastic Fridays. It is for those Fridays when SISD has professional development days. The next Fantastic Friday will be Nov. 11.

This program is for PK-eighth graders and is a day of learning and fun. Lunch will be provided. Each day will consist of theme-based learning activities and games. Register to attend online or in person. Online go to fbcs22.com or Facebook, First Baptist Church.

•It will be time to vote soon. Election Day is Nov. 8. Last day to register to vote is Oct. 11. There are many local elections important to our community as well as to the state. 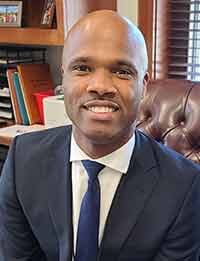 The 2022-2023 cohort, the largest since the program was founded in 2016, includes leaders from school districts in Arkansas and across Texas. It includes Superintendents and Assistant Superintendents, along with Executive Directors and other district leaders. School districts of many different sizes are represented, from rural schools with less than two hundred students,to urban districts with over sixty thousand students.

Locally, Dr. Bryan Taulton of Coldspring-Oakhurst CISD was among the leaders.

Of the program, 2021-2022 participant Dr. Angela Herron, Chief Teaching & Learning Officer, Grand Prairie ISD, said “SMU’s District Leadership Fellows program is a wonderful program that enhanced my ability to lead with a more laser focus on my desired goals for my district. Through complex, relevant, and engaging activities, the program equipped me with the tools to have a more strategic approach to problem-solving, which allowed me to lead more efficiently and systematically. I appreciate my time in the program and found each session beneficial to increasing outcomes for my district.”

The District Leadership Fellows program is a strengths-based leadership development program that enhances the leadership abilities of established and emerging school district leaders through an intensive year-long cohort.

Through collaboration with peers and recognized education experts, Fellows are empowered to solve hard problems in their districts, build their leadership skills, and develop lasting educational leadership networks. The program is hosted by the Institute for Leadership Impact in the Simmons School of Education & Human Development at SMU in Dallas.

Bunch, and Drs. Cline and Poole are returning Fellows.

The Institute for Leadership Impact at Southern Methodist University works with emerging and established leaders in education, health, and social enterprise to help them develop the skills they need to be more effective in leading organizations and solving real-world problems.