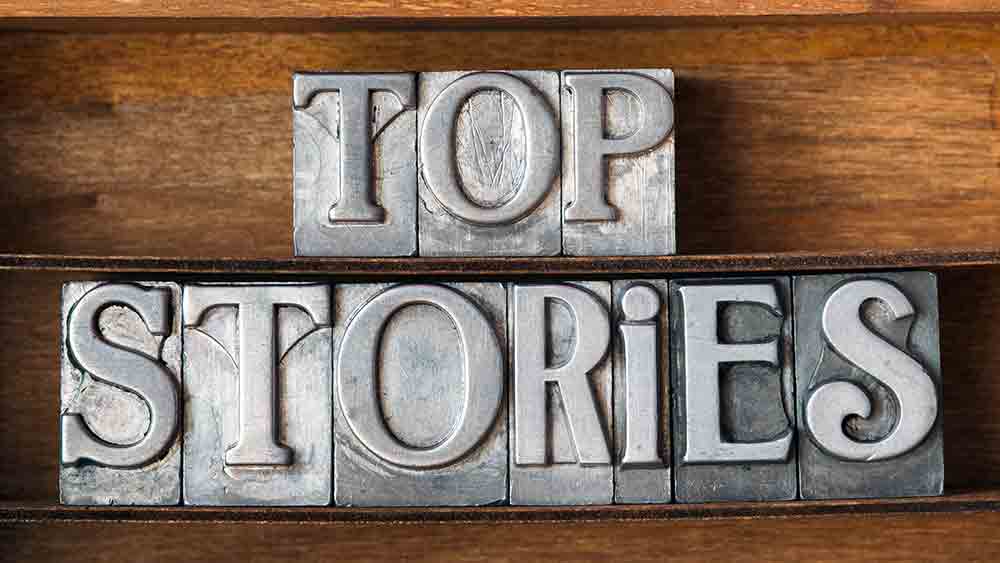 The county’s schools, arguably the central part of any East Texas community, were front and center in the news during the last year.

For instance, campuses across the Shepherd Independent School District were given a reason to celebrate, since the accountability rankings given out by the state showed the district came in at a B grade.

Superintendent Jason Hewitt said in August that according to the Texas ratings, the district before was an overall C, and there were three F campuses — primary, middle and intermediate. The high school was a B, and a C the prior year; the intermediate school was a seven-year F, and the middle school was at a four-year F.

Because the intermediate school had failed multiple years in a row, the district opted to install a board of managers, and in March 2020, Hewitt was installed as superintendent. Hewitt said he is a turnaround administrator, having improved other districts with failing scores, which is evident by the new score.

In March, San Jacinto Deputy Constable Neil Adams, 62, was killed during an altercation while working a second job as a security officer.

According to information from the Houston Police Department, 35-year-old Czyz Harrison, who was arguing with a store clerk, was fighting with Adams. During the fight, the suspect took Adams’ weapon and shot him.

Adams was working security at PlazAmericas Mall on Bellaire Boulevard.

Two Houston police officers were dispatched to assist and found the suspect who reportedly was wielding a knife. The officers attempted to get the suspect to surrender, but the suspect refused to comply and then charged at the officers.

Adams was laid to rest with full honors later that week at Montague Cemetery, with “Taps” and a 21-gun salute.

Both the Shepherd and Coldspring school districts, facing issues with staff retention and hiring, and to facilitate learning and growth for students and instructors, have opted to move to a four-day school week.

The Shepherd board approved the measure to allow the staff to learn and grow within its profession in an environment that continues to change regularly.

The move was made since 60 percent of the teaching staff has three or less years of experience in a classroom, all of which has been during a global pandemic. This has led to a 35-40 percent turnover rate, which means almost half of the staff is new to Shepherd ISD each year.

The Coldspring-Oakhurst CISD moved to a 4-day school week.

Superintendent Dr. Bryan Taulton said the switch would be in an effort to recruit and retain teachers in a highly competitive job market due to the statewide teacher shortage.

He also said that the results of surveys that were sent to parents and guardians, employees, and high school students were in the majority favorable to the change.

The calendar would be part of a three-year pilot program during which data would be reviewed to monitor the results in order to gauge its effectiveness and impact on student learning, he said.

In July, Shelley Susan Thompson-Lemoine, 41, was arrested in Angleton by Texas Rangers and detectives from the Cleveland Police Department in connection with a double murder case committed in Cleveland in 2005.

She was charged with capital murder in connection with the deaths of Antonio and Luz Rodriguez. Bond is set at $1 million dollars.

However, as the result of a conviction, DNA was collected when Thompson-Lemoine was incarcerated in a Texas Department of Criminal Justice facility, which ultimately was flagged as possibly being connected with the closed case.

New information and a re-examination of evidence led San Jacinto County Sheriff’s deputies to make an arrest in a three-year-old homicide case in October.

In November, the Shepherd City Council took the next required steps for the creation of its Police Department on Nov. 14.

The council adopted an ordinance that establishes a police chief and the scope of duties, and appointed Precinct 2 Deputy Constable Clint Headley as chief.

City Secretary Debra Hagler said the ordinance allows Headley to hire another officer to bring department up to two full-time officers. The old City Hall building was used as an office for the constable, and now will become the Police Department building.

Hagler said the department will be up and operational once the city receives the necessary credentials from the Texas Commission on Law Enforcement.

POINT BLANK — Both sides of a disagreement at the Point Blank VFD have approached the Point Blank City Council, which in turn has issued a statement that it does not have a position.

At its regular meeting on Dec. 12, council members heard from the PBVFD leadership about the dismissal of several firefighters and other complaints that have been levied against VFD.

The VFD told the council it has proceeded as it always has since its inception.

Among the issues claimed by former members of the VFD, the chief and assistant chief met privately to amend the group’s bylaws, and when existing VFD volunteers voiced objections, they were let go or demoted.

One of the firefighters had planned to run for chief in an upcoming election but was fired within hours of his announcement. According to the new bylaws, he is now ineligible for the election.

Additionally, the ex-firefighters say they have been reprimanded for arriving at emergency sites ahead of EMS crews, which violates PBVFD procedure as per a verbal order.

The firefighters have taken up their case with the Emergency Services District and have been seeking to win public opinion as well.

The city took no action about the disagreement and issued a statement that the council is aware that there are disputes and issues within the PBVFD and, as yet, has not taken a unified position.

The council, through the statement, hopes to assure the Community, ESD, and the PBVFD that if the City feels the need to intervene, it will issue concerns directly to ESD or the PBVFD.

The city has not involved itself in any other investigative route, demand of action, or informational request. Such actions are not issued by the City, and do not represent the City of Point Blank, according to the statement

•accepted the latest audit, which was in line. The council was given suggestions to put an asset policy in place, and to capitalize street repairs. 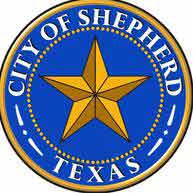 SHEPHERD — The recent Christmas celebration at the city park gave the Shepherd Board of Aldermen the impetus to step up its maintenance of city property.

City Secretary Debra Hagler said during the setup for the event, it was found that there were problems with a restroom which had not been used in some time, and that many electrical outlets were damaged and not functioning.

•tabled action on a request by Jeff Langham to purchase a portion of the alley of Block 64;

•tabled action on installing streetlights along Finger and Seal streets; and

•approved the ESD’s use of the Community Center to receive bids for the Coldspring VFD on Jan. 1, 2023. 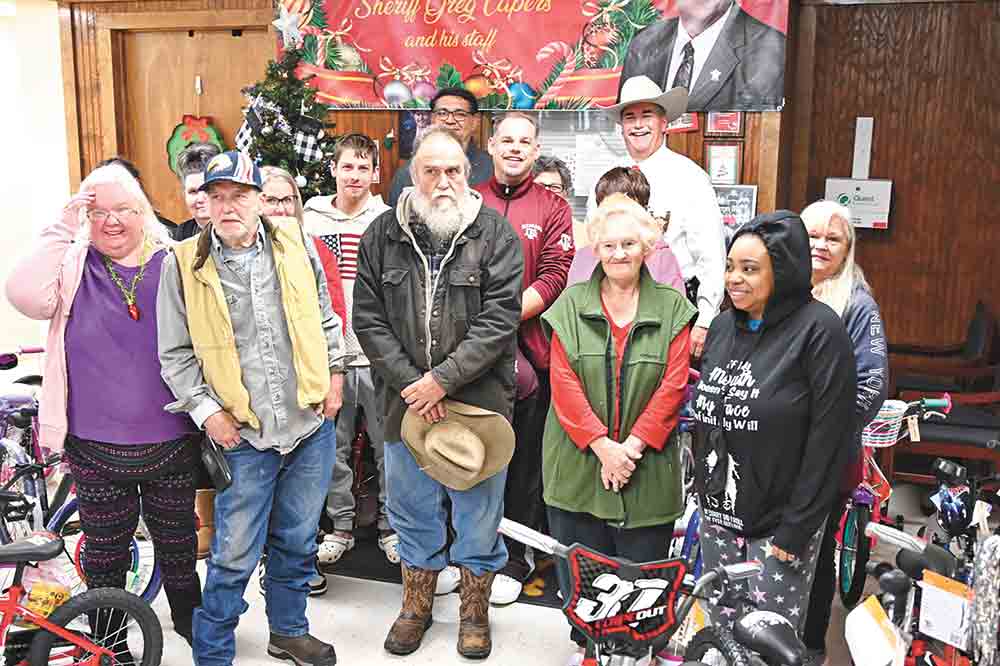 Several weeks ago, Sheriff Greg Capers called a meeting with his Patrol Lt. Ray Bowen and senior members of the dispatch team, Jane Cooksey and Meagan McDougle, to establish what will become a yearly program to bring smiles to the little ones of our county.

“Santa” Capers announced to his team that he would be reaching out to the community for contributions of bicycles that would be distributed on a first-come, first-served basis who responded to a Facebook solicitation, as well as word of mouth throughout the community.

Not to anyone’s surprise, the line was out the door on this Thursday morning, 22 December when the parents whose names were selected went on to receive the much-anticipated bicycles.

Capers said, “In my business you don’t have many opportunities to see so many smiles on so many people all at one time, it warms my heart.” 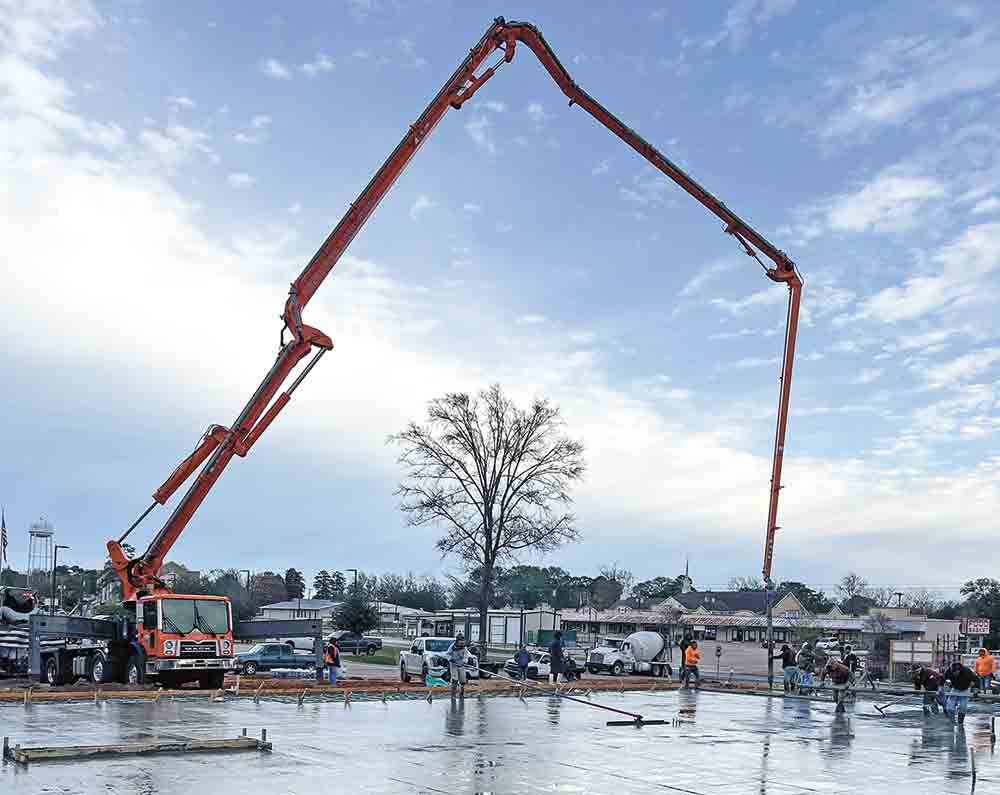 COLDSPRING — The San Jacinto County Commissioners Court moved to save money on the construction of its Innovation Center.

During its regular meeting on Dec. 14, the court discussed changing the water supply line size.

County Judge Fritz Faulkner said he was contacted by the water company asked about the proposed 3-inch water main. Faulkner said the building possibly was overdesigned, and since the building would not be used as a shelter and did not need a fire suppression system, there was no need for large water service, so a change was made to a 2-inch line.

While the change in line size would be handled in a change order from the contractor, the county felt it was proper to approve the change to a smaller feeder line.

Additionally, project manager Mark Wood said that at a job site meeting recently, it was discovered that there were no floor plugs included in the design.

Wood said he asked the contractor to look at it before they poured the foundation; the contractor proposed placing  a floor box in the center of each of the training rooms, and three in the Office of Emergency Management area at a cost of $23,574.

Faulkner and the commissioners balked at the cost and suggested that county personnel do the work prior to the foundation being poured.

“I don’t want to be the guy who voted to spend 23 thousand to put plugs in,” Faulkner said.

Commissioner Laddie McAnnaly asked if the county could do the work themselves; there was a question of whether the site belonged to Timberline Construction during construction or was it a county property and they can do what they want.

Faulkner agreed, saying it was a great idea for the county staff to do the work, but it would be done at a later time.

•declared an acre of land in Coldspring as surplus and put it up for sale with a minimum of $25,000;

•approved a proposed list of people to serve on the county’s Historical Commission;

•approved catering by Mary Gray for the county Christmas party;

•took no action on abandoning Webb, Carey, Dolive, Kilgore, Lombard and Webfer county streets in Oakhurst, as a motion by Commissioner Mark Nettuno died for lack of a second;

•approved the replat of two lots in the Waterwood subdivision;

•approved an agreement with the city of Shepherd for permitting and inspections;

•approved an agreement with the city of Point Blank; and

•awarded the bid for grant application and engineering services for the PB&SC Water Co. to J.F. Fontaine and Associates.