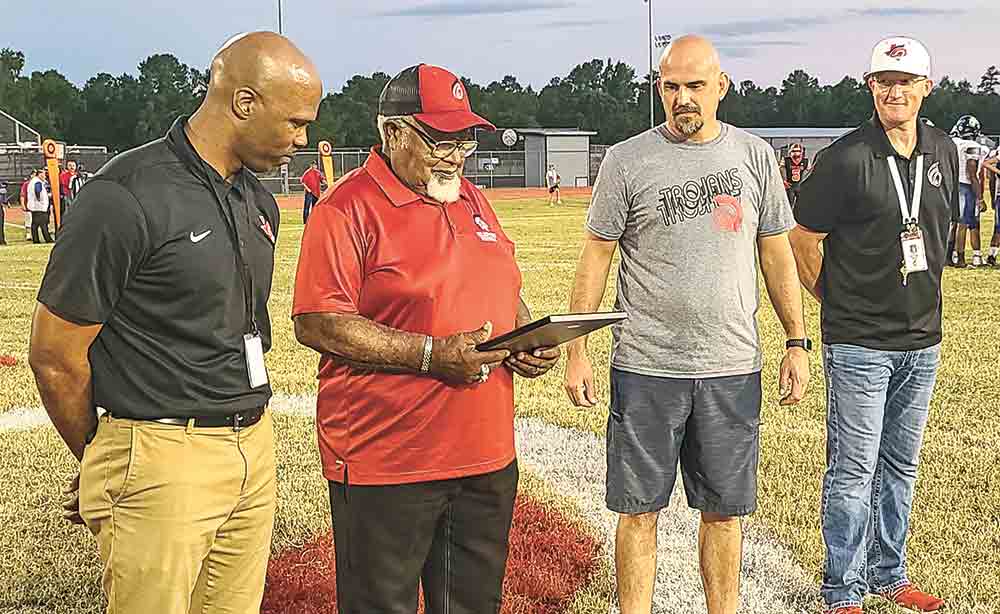 COCISD Board Trustee Berlin Bradford received a plaque to commemorate the naming of Trojan Field at Berlin Bradford Stadium in his honor. Bradford has served the COCISD students and community for over 57 years, as a teacher, coach, and school board member. Photo by Cassie Gregory

COLDSPRING — In a touching dedication ceremony, former COCISD coach, teacher, and current school board member Berlin Bradford, who has given six decades of service to the district.

The ceremony was held between the first and second quarter of the Homecoming Game on Friday. Coach Bradford and COCISD administrators walked to center field as Announcer Jeff Eichman read the dedication.

“Tonight, we honor Mr. Berlin Bradford for over 57 years of service to Coldspring-Oakhurst CISD and the Coldspring community. Mr. Bradford dedicated 33 years to the district while serving in the classroom as a teacher and coach beginning in 1964.

“In 1998, Mr. Bradford was elected to the COCISD Board of Trustees where he has served for the past 24 years.

“This past May 23, the COCISD Board of Trustees unanimously voted to rename Trojan Stadium in honor of Mr. Bradford. Tonight, we present him with a commemorative plaque that reads:

“Ladies and gentlemen, it is my privilege to officially welcome you to Trojan Field at Berlin Bradford Stadium.

“Thank you, Mr. Bradford, for your continued service.