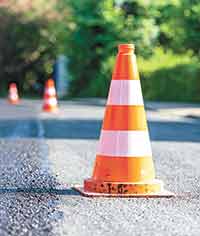 POINT BLANK — The Point Blank City Council took steps to ensure its roadwork in the future is clear and above board.

At its regular meeting on Aug. 8, Mayor Mark Wood introduced an ordinance declaring Northwoods and Forest Cove as definitely within city limits.

Wood said that since infrastructure money is cutting loose, he figured the city needed to put something in writing declaring the Point Blank considered those streets as city streets.

Wood said that the Forest Cove subdivision never had a road dedication, which should have been done when it originally was platted back in 1971; however, the city has been taking care of those streets, and “once you touch something, it’s yours.”

In Northwoods, the city annexed the north section of the subdivision in 2003, but the paperwork was not filed correctly at the county. The error was discovered in 2012, and the paperwork was refiled, but it still was incorrect.

It has since been resolved.

In a related matter, the council discussed receiving $500,000 from DETCOG’s hazard mitigation grant funds, and approved hiring a grant administrator to handle the necessary paperwork.