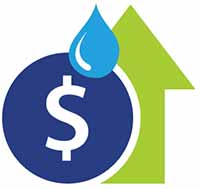 SHEPHERD — The Shepherd City Council approved a hike in bulk water rates at its regular meeting on Aug. 8.

Currently, the city charges $60 for the first 1,000 gallons, and then $4.10 per 1,000 additional. However, with most of the state suffering drought conditions, council members opted to raise prices.

The bulk water is chiefly used by construction companies, particularly road crews, and according to Public Works Director Jamie White, Shepherd is the only municipality in the area selling water at this time.

With the ban not on the agenda, the city opted to raise the costs, and may revisit ending sales at a later date.

Water was an issue in another matter for the council, as a proposed RV Park development on North Byrd Street would put a strain on the city’s water system.

City Secretary Debra Hagler said that currently, the city’s water system is operating at 83 percent capacity, and that the RV park, if approved as is, would put that at 89 percent. That level of use, based on state regulations, would require the city to add an additional well.

The developers had initially asked for 89 RV spots, which is above city regulations of 16 per acre, and would require a variance; however, they told the council that they would alter the plans to be within ordinance for a total of 79 spots. Hagler said this still would put the system at 85 percent, the state threshold.

Council members agreed, though, that in order to meet any future needs, the city needed to increase its capacity anyway.

Ray Vann told the council that certain grant funds the city had access to will facilitate the process, so the city opted to approve the development, and will discuss adding a well at a later date.

•tabled a request to extend a sewer line on South Byrd Street by 325 feet;

•approved an order of election for Nov. 8;

•scheduled a budget workshop for Aug. 23; and

•approved the expenditure of $27,000 for renovations at the city sewer plant.