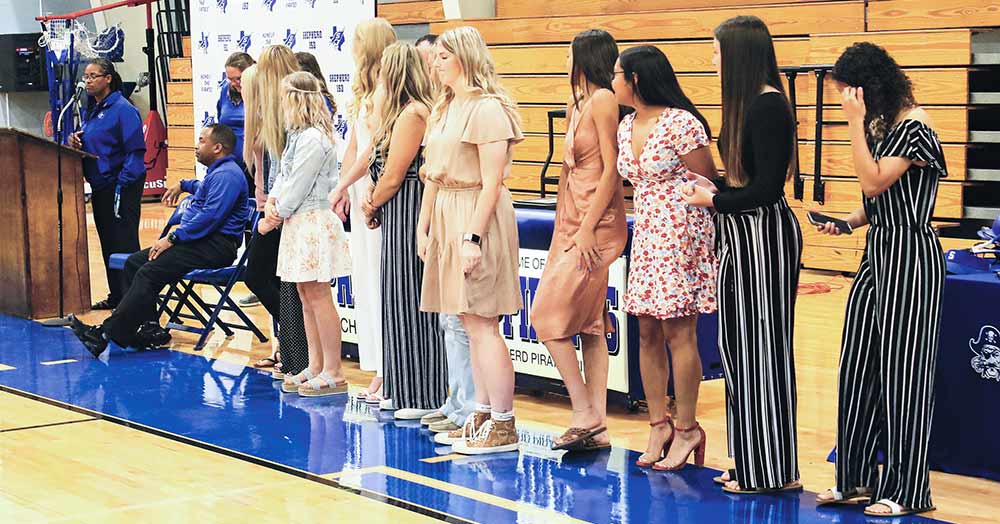 Head Softball Coach Suzon Martin discusses the heart of her team during the athletic banquet on May 10. Photos by Tony Farkas

SHEPHERD — Some bright spots, and some low spots in many sports, highlighted the 2021-22 sports year for Shepherd High School, but through it all, the biggest highlight was the Pirates’ fighting spirit.

Athletic Director Miles Robison said at the annual sports banquet on May 10 that overall, it was a great year, mostly because of the never-say-die attitudes of the players.

“We have some great kids,” he said. “We are one of the smallest schools in 4A, at the very bottom, and the last few years these kids have come out every day and given 100 percent, and that says a lot about their character.”

Since the district has some of the best athletes in the state, Shepherd faced opponents that were tough, he said.

“It say a lot about the kids that they’ve got their tails bent the last few years and they still show up and still deal with us as coaches, as well as compete at the level they’ve been competing at,” Robison said.

Robison praised the parents, the athletes, and the administrators, as well as giving coaches credit for motivating the students.

“We had some great successes, especially in powerlifting,” Robison. Had two state champions in the event with Lain Baker and Rudy Morales.

Athletes in individual sports were given MVP awards.