CORRIGAN — The Corrigan-Camden Bulldogs lost a fourth-quarter lead to Elkhart and eventually the game 46-41 Friday on the north end of Polk County.

Trailing for much of the contest, the ‘Dogs slowly narrowed the gap in each quarter after the first.

“I thought we played well enough to win. We just didn't execute late in the game, which caused us to lose,” Corrigan-Camden coach Andrew Kirkindoff said. “I think it is kind of the same story. We play well enough, but in crunch time, we end up turning the ball over, making mistakes that cost us. I tell them all the time that it is our mistakes that is causing us to lose games. We are playing well enough, we just have to fix us.”

The Bulldogs looked a bit hurried on possessions early on, falling behind on the scoreboard.

Corrigan-Camden then seemed to run its offense well in the fourth quarter, patiently passing the ball and looking for open attempts. They took the lead and held it for nearly half the period. A quick run by Elkhart frustrated the Bulldogs, causing them to again settle for outside shots.

“I think that is just that we are young and starting a freshman. Most of the other ones are sophomores and a junior. Most of them are young and played JV last year, so it is just experience. I knew that there were going to be some Growing Pains early, but hopefully we can get this out of the way now and when we get to District we will be able to overcome them.

Tony Cooper led the Bulldogs with 15 points, Braylan Harrell had nine and Tra Thomas had eight. For Elkhart, R.J. Moore was tops on the night with 21 points, Cale Starr had nine and Josh Davis added eight.

The next game for Corrigan-Camden will come on the road Tuesday, as they face Alpha Omega Academy in Huntsville. 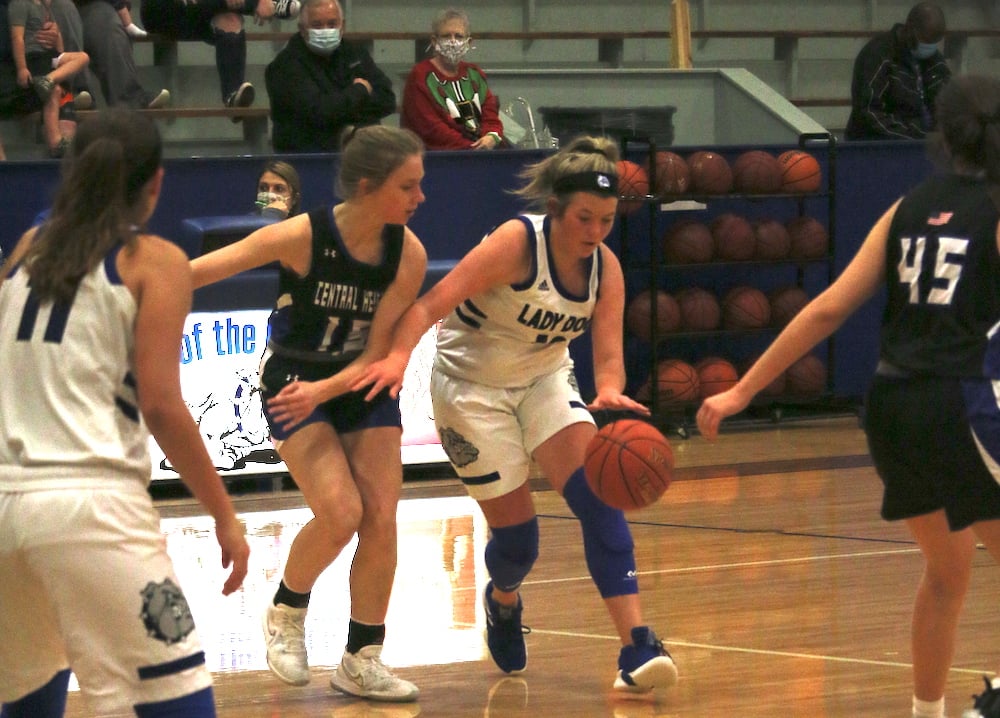 Central Heights started quickly and had Friday’s district matchup decided in a quarter, winning over the Lady Dogs of Corrigan-Camden 72-8.

Holding the Lady Dogs without a field goal until the second quarter, Central Heights converted turnovers into layup, running up the first-half difference.

“We have four freshmen, two sophomores, a junior and a senior. It is going to be rough at times this year,” Corrigan-Camden coach Ryan Hall said. “The ones that were the team leaders last year didn't come out and they left it on the young ones. This group works their tails off in practice and does everything I ask them to. They will get better; it is just going to take time. We are not in a developmental district, but we have a developmental team. We're going to have to develop and get better and it is just going to be trial by fire this year.

“This is probably one of the toughest districts in the area and maybe the state. It is not because we have state-title contenders, but we have four or five teams in our district that, if the playoff bracket allowed them to, they could go to the regional tournament. They are very good and very high IQ basketball teams top to bottom.”

The Lady Devils led 41-4 at halftime, as most who suited up scored at least two points. Nakalyn Wells and Kamryn Moore led the game by scoring 14 points each, while Hannah Shugart had 11. For Corrigan, Amiyah Jones had three points, Jonaisha Love and Paige Standley both had a bucket, and Kalyn Smith knocked down a free throw.

The coach said Huntington, Central, Central Heights and Diboll would be favorites for the playoffs, along with Pineywoods Christian Academy. 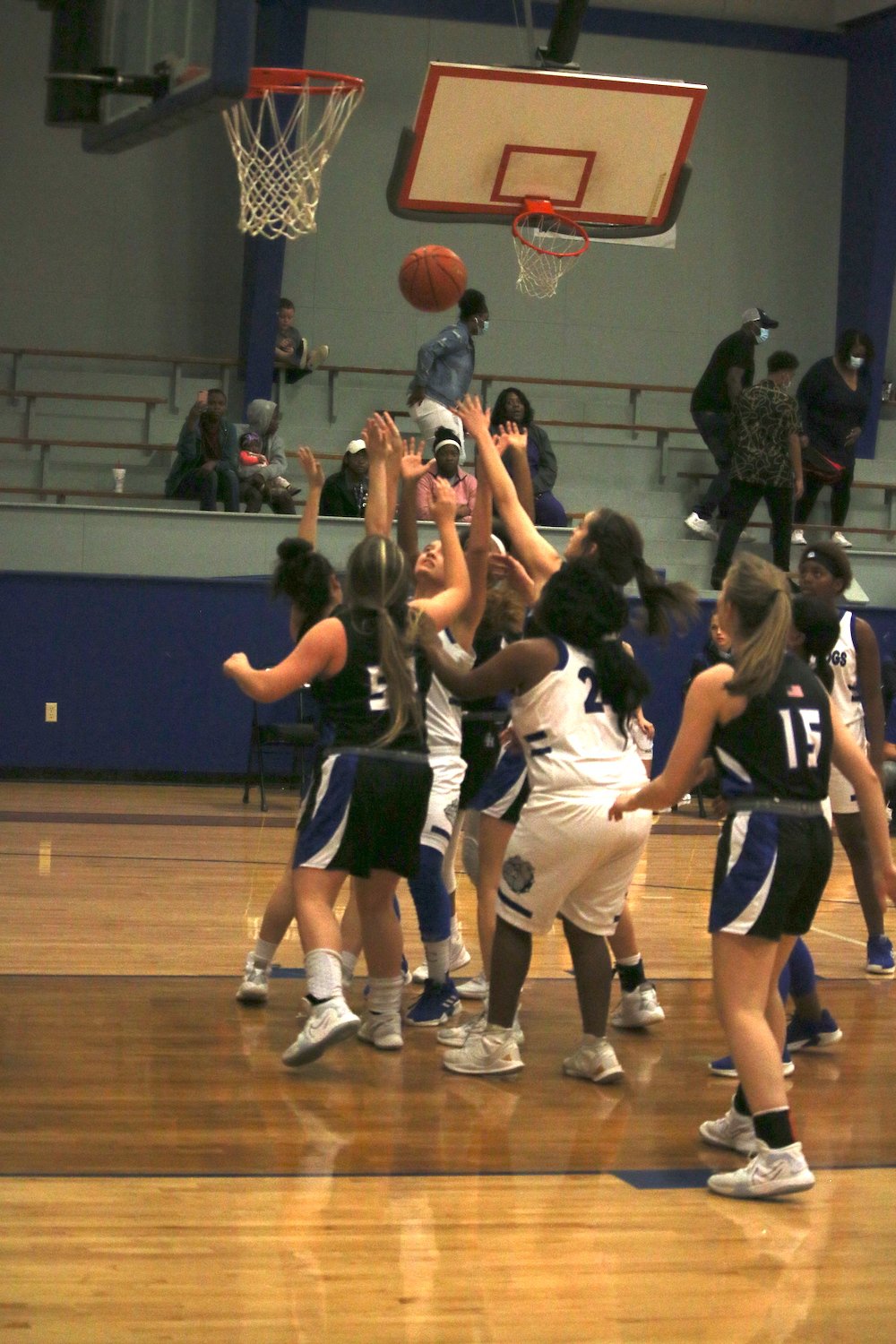 “That is the most athletic Central Heights team that we have played,” Hall said. “They always have good basketball IQ and good basketball teams, but now they are bringing athletes to it too. Huntington has dropped down (in classification) and they've got a D1 track recruit at point guard. She is all gas and no brakes, and she doesn't slow down even when she has the ball. She can go. I would say that they are probably the favorite to win district as long as she plays.”

Hall said his squad's attitude is what he enjoys most.

“Everything we asked them to do, they do. Everybody gets along, we have zero drama, and they play to the best of their ability. They are a fun group to be around. They are not the strongest basketball players right now, but if they keep that attitude and keep playing, they can learn basketball.”

The Livingston Lady Lions suffered their second district loss in as many games Tuesday, as the Liberty Lady Panthers escaped Polk County with a 45-42 win.

“It was rough,” Livingston coach Brittany Jefferson said. “I at least expected the girls to come out here and do what they were supposed to do. They came out and, just to be honest, they had no energy whatsoever. We wouldn't box out, we didn't get rebounds, the turnovers with the guards that I had — we were just giving the ball straight to Liberty. They just didn't do what they were supposed to do.”

The game Tuesday was a case of too little too late. The defending district champions seemingly picked up their intensity and focus in spots, but could not sustain a high level of play. A fourth-quarter comeback attempt fell short.

Leading 9-4 in the first quarter, Liberty went on a 12-3 run and eventually took a 22-19 advantage into the break at the half. The Lady Panthers came out of the locker room and put another eight points up before Livingston answered.

Livingston is now winless in two district games, dropping the first to district favorite Hardin-Jefferson in a lopsided 103-10 blowout.

“I would have assumed that, hopefully, we would have been 1-1 now,” the coach said. “We just have to take it as it is and, hopefully, they'll learn from it. If not, it is going to be a long, long, long season.”

Jefferson most wants her team to be able to take care of the ball. The team had problems setting up and executing an offense because of an inability to control the basketball.

The Lady Lions’ next opportunity to get in the district win column will be Dec. 18 on the road at Hamshire-Fannett.

Discuss this story in the East Texas News Forum 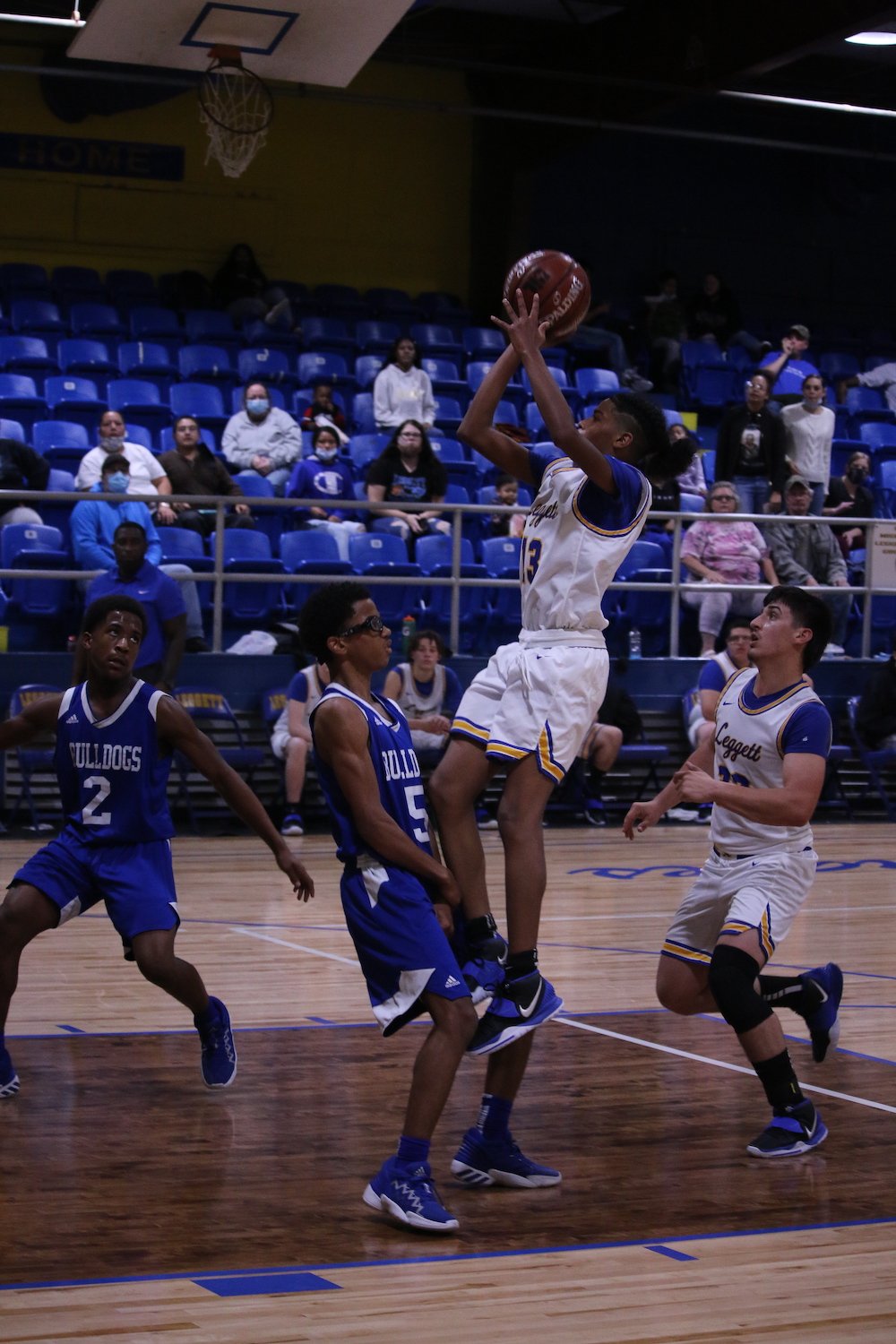 Josh Perkins led all scores with 20 and Chase Parrish had 19 to pace the Pirates. The freshman Perkins was lethal in the second half, pouring in 18 points in just two periods.

“He is going to be a scorer,” Pirate coach Sean Edwards said of Perkins. “He was a little nervous the first couple of games, but he has gotten better. When we played (Hull-) Daisetta, he did real good and he is stepping up his game. It's going to be completely different this season because we have to live and die by defense, but we have to play more half-court offense as well. “We have to be patient with everybody sharing the ball more too this year.”

The Pirates have put together back-to-back victories after beginning the season 0-3, while playing up in classification.

The first quarter of Wednesday’s game began a little slow at 4-2 in favor of the ‘Dogs, as both offenses needed time gain traction.

“We started off slow and a little sluggish. With (a first-quarter score of) 4-2, I thought we were at a little dribblers game,” Edwards said. “I think it was more of nerves than anything, but we'll be fine. I am happy with how we are tough and running help more half-court offense. We need to work on taking care of the ball. We had 22 turnovers again, and we can't go far with that.”

A 12-point run in the second quarter allowed the Pirates to take an 18-13 lead into the half. Leggett would score 17 and 15 in the final quarters to further distance themselves and take the game.

For Corrigan, Tra Thomas had a dozen points and Tony Cooper had nine.

“Tonight wasn't one of our better games,” new Corrigan-Camden coach Andrew Kirkendoff said. “I thought we could have handled the ball better. There are a lot of things that we have to work on, but I think coming to a program that really never had a focus on basketball, we're just trying to build a program. It is a day-by-day process and I think by district we’ll be ready.”

The Bulldogs are currently 0-3 on the young season, with a loss to Palestine Westwood by seven and Groveton by four.

“I think we are small, so we have to work together,” Kirkendoff said. “As you can see, we had trouble rebounding. I've got a couple of guards that can play and I think when they understand the game better and understand what I'm trying to do in the system, I think will be a whole lot better.” 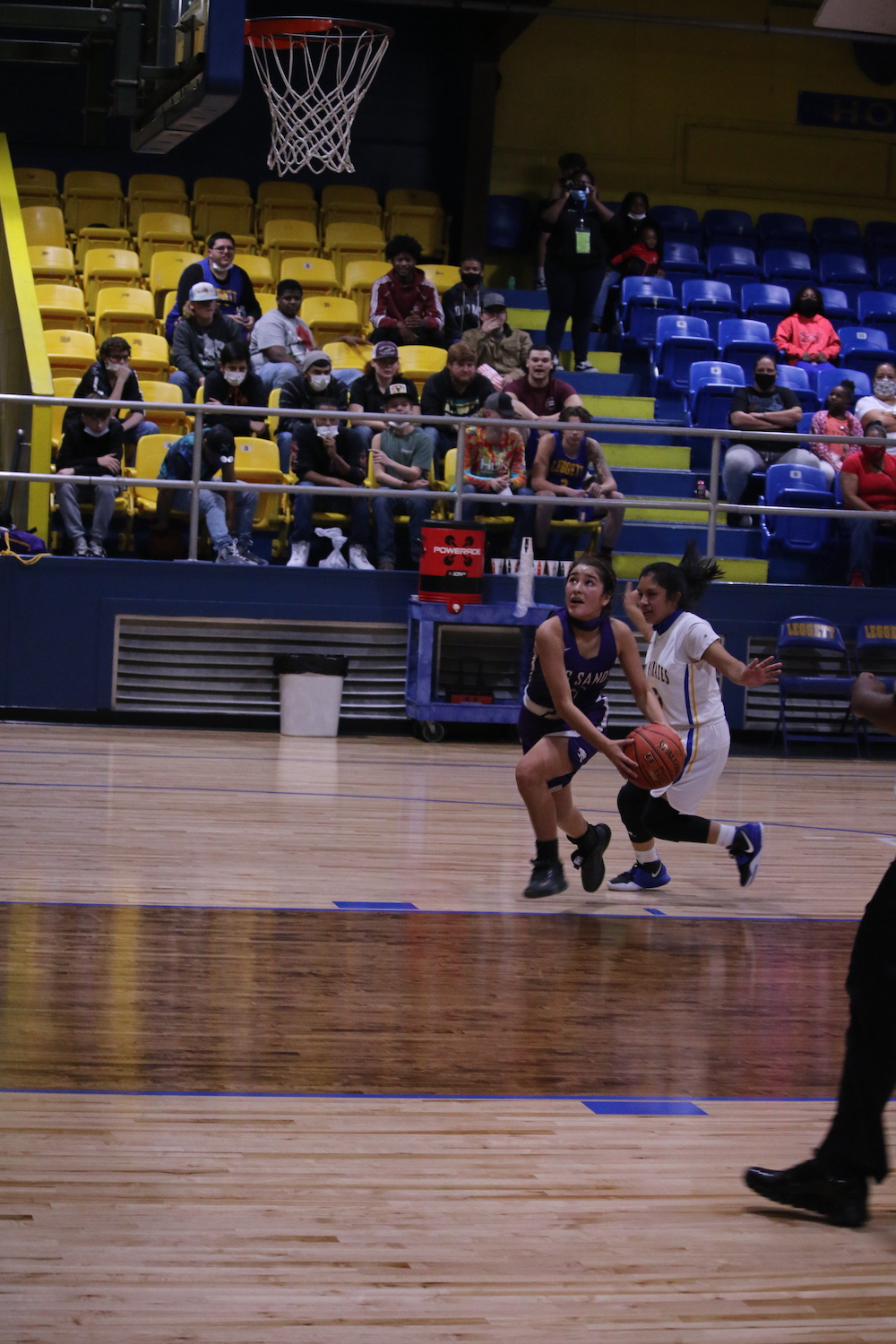