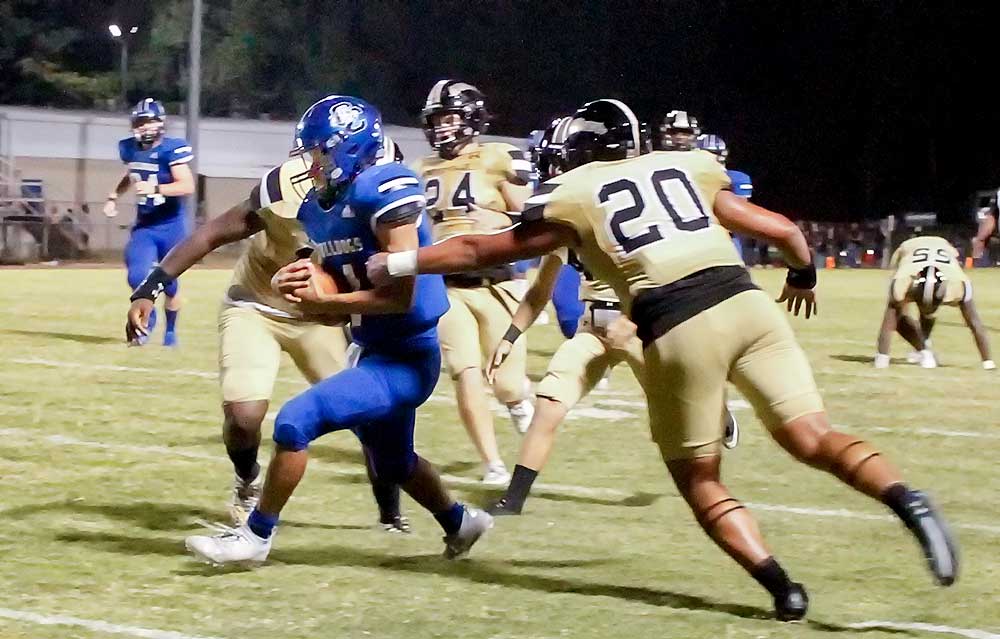 Christian Guzman fights the tackle to get a short gain. (Photos by Albert Trevino)

The Corrigan-Camden Bulldogs came up short in a 19-13 loss against the Woodville Eagles on Friday.

Early mistakes versus the quick physicality of the Eagles squad kept the game out of reach for Corrigan, although the Bulldogs would fare better late in the game. 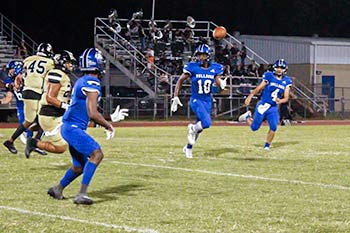 Bulldog junior quarterback Christian Guzman delivers a pass to JaVarion Williams.“Our first step was not the best early and they were moving around, stunting so many people ... That was the first time we saw that all year and we needed to see that before district starts,” said Bulldog head coach Brett Ratliff. “They are a really good football team and for us to play like this, I am proud of the guys. But I am disappointed because I felt like a couple of things here and there that we do better, we win the ball game.”

The Bulldogs quickly reached the red zone on its first possession, but later turned the ball over on downs.

This allowed the Eagle offense to strike first with a short pass from quarterback Jack Fowler to Raylon Williams that went 91 yards for a touchdown. With the extra kick, Woodville took the 7-0 early lead.

Later in the first quarter, Corrigan’s offense found themselves starting deep inside their own 5-yard line.

It did not take long for the Bulldogs to crumble under defensive pressure up front and allow a fumble recovery in the end zone for a defensive touchdown to extend the Eagle lead 13-0 into halftime.

The Eagle offense threatened to further extend the lead during the third quarter, marching deep into the Corrigan red zone.

However, a pass attempt was picked off by Bulldog junior JaVarion Williams, who ran the length of the field for Corrigan’s first touchdown. This helped cut the Woodville lead 13-7 for a one-score game. 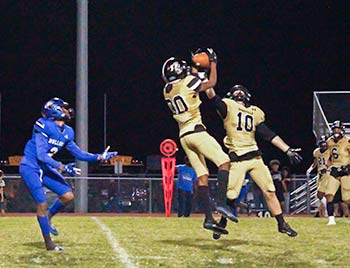 Eagle defender LeBron Millers breaks up a pass attempt to Bulldog sophomore Tony Cooper.Woodville came back with a run-heavy scoring drive in the fourth quarter, finished off by Pop Prejean’s three-yard touchdown rush to go up 19-7 late in the game

The Bulldog offense responded with desperation fourth-down pass from junior quarterback Christian Guzman to Williams for a touchdown to make it 19-13 in the final minutes.

Corrigan’s defense was unable to prevent a first down on the following Eagle drive, which sealed the win for Woodville.

Ratliff noted that, despite the loss, it was another solid four-quarter effort by his team.

“You learn a lot about your team. Are we going to start to slow down and give up when things are not going our way, or are we going to fight back and keep working?” Ratliff said. “These kids kept fighting and fighting. That proved to me that I know for four quarters, every single week we show up, we are always going to be in a football game.”

The Bulldogs will travel to Elkhart to battle the Elks for the last non-district game of the season this Friday at 7:30 p.m.