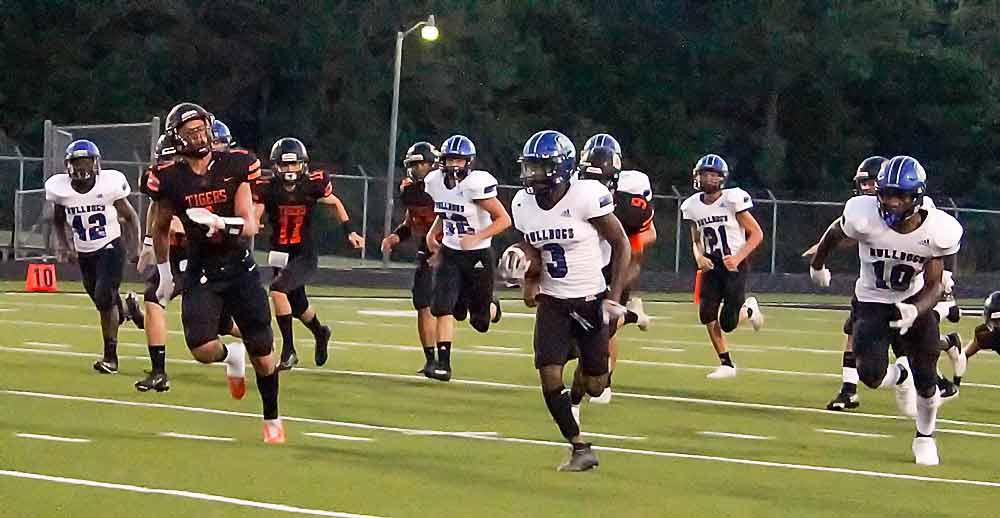 The Corrigan-Camden Bulldogs have a two-game win streak to start the season after defeating the Centerville Tigers 27-19 on the road Friday.

It was a physical battle until the end, just as advertised, with Centerville and Corrigan swinging the momentum throughout the night and taking it into overtime.

“We did what we had to in order to win.” said Bulldog head coach Brett Ratliff. “Coach Hardee has those kids hardnosed ... We knew we were going to have to play all four quarters and it actually took longer, but we did it.” 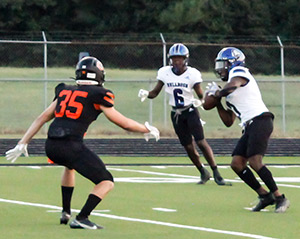 JaVarion Williams throws a touchdown under pressure on a reverse play. (PHOTOS BY ALBERT TREVINO)The Bulldog coaching staff made the necessary adjustments to help keep offense flowing and had the defense stepping up with big stops late in the game.

“These kids played the perfect team game tonight ... They did their jobs and what we ask of them. After four quarters and a little bit, it feels good to get this win.” Ratliff said. “[Centerville] had to earn every single yard that they got. [Defensively,] we had them figured out when it mattered the most.”

Corrigan struck first on the opening play from scrimmage with a reverse to senior JaVarion Williams, who threw his first highlight pass of the game to sophomore receiver Tony Cooper for a 68-yard touchdown.

Later in the first quarter, Tiger sophomore running back Andrew Newman answered by returning a punt over 50 yards to score and tie the game at seven points each.

Centerville would take a lead early in the second quarter with a strong drive, capped off with a short touchdown run by junior running back John Robinson.

The two-point attempt was intercepted and no good, which made it a 13-7 lead for the Tigers.

Late in the half, the Bulldog offense turned the ball over inside the red zone on a fumbled handoff. However, the Tigers would fumble the ball right back to Corrigan.

That turnover led to a short scoring drive for the Bulldogs, featuring some different formations with Williams and senior Deveion White under the gun. The drive was finished with a short touchdown run by White. 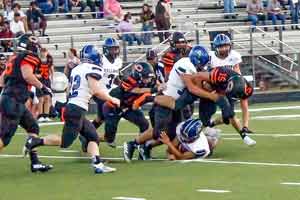 Tiger fullback Paxton Hancock is stopped by the Corrigan defense for a short gain.Corrigan’s extra kick was blocked, which tied the game at 13 points at halftime.

The Tigers came out strong in the third quarter, with junior fullback Paxton Hancock powering through 80-yards for a touchdown run. The two-point attempt was no good.

Late in the third, Williams’ second highlight pass would occur on a severely botched play.

A high snap fumble in the backfield was recovered by Williams, who also managed to sling the ball to senior receiver Ruger McLain under heavy pressure.

McLain broke away inside Tiger territory for another game-tying touchdown, followed by one last failed extra point.

Both defenses managed a shutout in the fourth quarter, which led to overtime.

Corrigan first took the field in overtime and scored on a Williams run, followed by a successful two-point pass. The Bulldog defense carried this momentum and followed this up with a quick three-and-out against Centerville to seal the victory.

The Bulldogs play their next match at home against the Woodville Eagles Friday at 7:30 p.m.