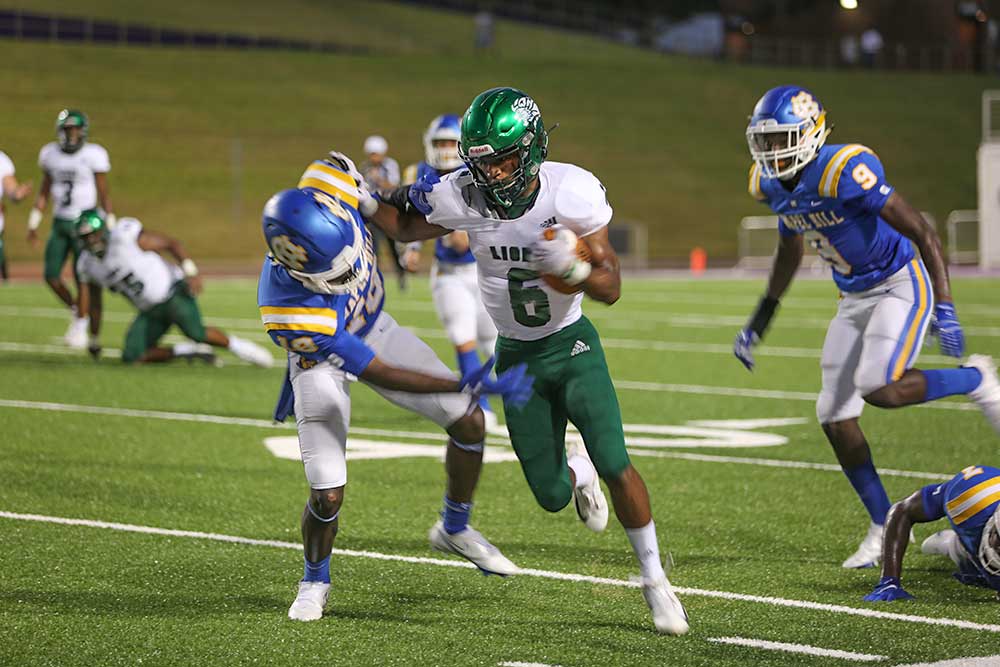 Julian Gardner stiff arms a defender after the catch.

The offense sputtered and the defense allowed too many explosive plays, as the Livingston Lions (1-1) fell to Tyler Chapel Hill (2-0) 35-15 Friday. Homer Bryce Stadium in Nacogdoches was the setting for the rematch of two teams that met in the postseason’s first round last year.Quarterback Tyler Jones (14-for-25, 328 yards, 4 TDs, INT) and the high-powered Bulldog offense delivered big plays consistently enough to keep the Lion defense guessing. A 28-yard run, and passes of 84, 63, 60 and 28 yards were all Chapel Hill scoring plays, while adding a 13-yard sack for a safety. Jones found four different receivers for the scores, but hit Deuce McGregor (5 catches, 153 yards, TD) most in the game. 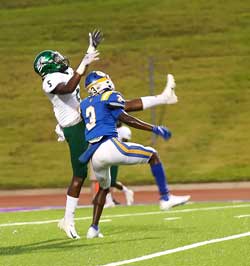 Jontavian McNeal extends for the loose ball."It was a bad night of tackling and they got us on the post routes deep like they did last year,” Livingston coach Finis Vanover said. “We have to get in better shape. We weren't in as good of shape to play as many snaps on both sides of the ball. Some of our guys got a shock tonight, but they are not all of that until they get their legs ready to go. They have to be ready to play whether they are tired or not.

“There were way too many busted assignments and we dropped the ball too much. We didn't protect the passer early and we started making poor decisions from the quarterback position. They buggered us up a little bit physically because of the double duty from a lot of folks and we had some guys out that we have been using for depth."After gaining 500 yards a week ago, the Livingston offense had problems sustaining drives or converting fourth downs with short yardage. Keeping Bulldog defenders out of the backfield proved to be a too large a task. Quarterback Damian Ruiz (7-for-18, 115 yards, TD), and later Jontavian McNeal, spent the night scrambling from the pocket, and Lion rushers had no room to generate yardage. "We made mistakes in the first half offensively when we had our first three drives," Vanover said. "We wanted to control the tempo of the game and we did and moved it down and would have a snafu. Three out of five possessions we had a chance."

The two Lion touchdowns would come on long pass plays. The first was a pass from Ruiz to Kendrick Williams on a fake punt for 60 yards. The next was backup quarterback McNeal, who found Julian Gardner (3 catches, 93 yards) for 65 yards. 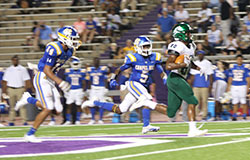 Kendrick Williams 250 lft"They are a fine football team and they showed up to play,” the coach said of Chapel Hill. “We had our chances to punch back and forth. They were better than we were tonight and they got us pretty good. They physically manhandled us inside on both sides of the ball well over half of the time and you can't lose that battle. They pushed and pulled inside and we couldn't."The coach mentioned the Lions are in about the same position as last season's second game, coming off a 28-7 loss to Palestine. In 2020, Livingston began an eight-game winning streak by defeating Orangefield. The Lions will travel to Orangefield Friday to battle the Bobcats.