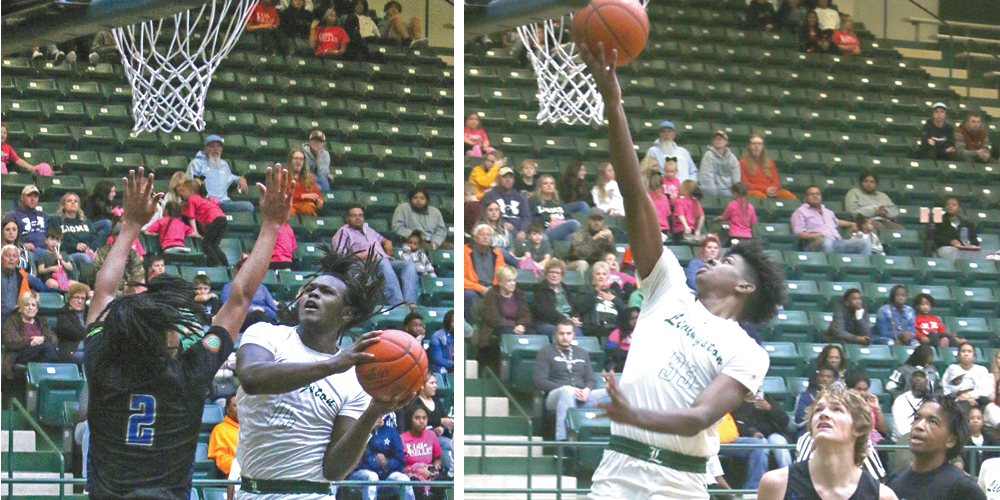 J.T. Randolph attempts to evade a defender on his way to the rim. Jayden Randolph lays in two of his 14 points.

Livingston basketball lost its district opener Friday 86-51 to Hamshire-Fannett in a game that was closer than the score would indicate.

Turnovers and fouls kept the Lions behind in the first quarter. Livingston had trouble maintaining possession and several errant passes went the other way, while a 10-2 difference in fouls would benefit the state-ranked Longhorns for a 20-8 lead.

Livingston pulled within five at one point in the second quarter when they took care of the basketball, but Hamshire-Fannett would stretch the margin to 33-24 at the half.

The Lions remained competitive with the No. 16 team in Class 4A until the end of the third quarter.

“Turnovers, turnovers,” Livingston coach Frederic Camp said. “It is like I said, I never can tell who is going to show up. When you don’t do what you were asked to do, that is what happens. You have to do what you’re asked, and if not, it is not going to happen.”

Scoring 27 and 24 in the third and fourth quarters, the ‘Horns did not meet much resistance from the Lion defense.

For Livingston, Willie Dault had 15 points, Jayden Randolph had 14 and Tyrell Fagan added 12.

Camp believes Friday’s game was the most turnovers he has seen from one of his teams.

“Probably about 25 or 28,” the coach said trying to estimate. “We got beat by that much, so that’s probably how many there were.”

He then talked about his frustrations with the defense.

“Here comes a guy full speed and we sit there and look at him and don’t even step over there and let him run over us. We tell them to step over there and take the charge, because they are coming at the top of the key to the goal. He is going to run over you. If he passes the ball or if he shoots the ball, he is going to run over you. We will take one or two, but that is about it and we let the rest go. It’s just ugly.”

The Lions will take a road trip to Huffman and take on Hargrave Tuesday, then return home for a match versus Hardin-Jefferson Friday.