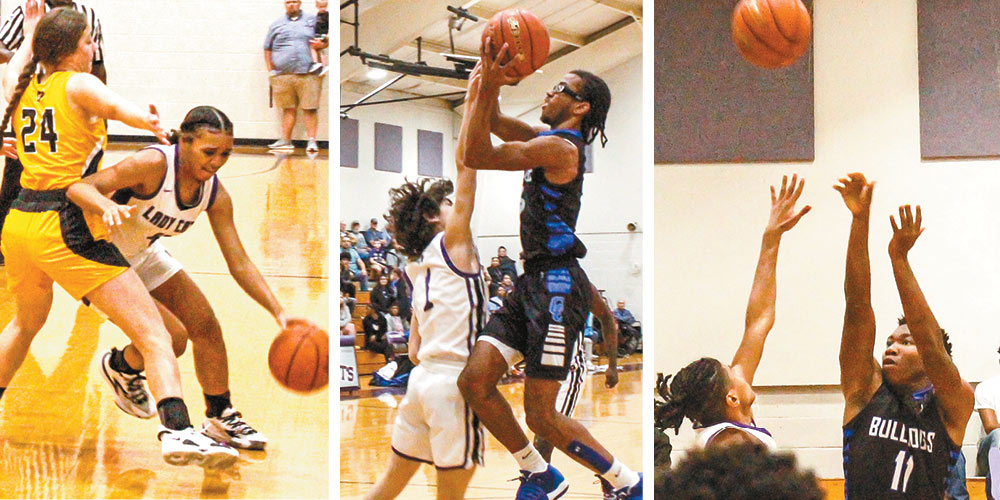 Savanna Poncho dribbles past a Woden defender. Tra Thomas drives and draws the foul in the first half. Bulldog Kam Wyatt elevates for a field goal attempt in Saturday’s championship game. Photos by Albert Trevino

The Big Sandy Wildcat boys finished Saturday’s tournament with a 74-52 championship win over the Corrigan-Camden Bulldogs.

Although the Bulldogs had an aggressive gameplan on defense, Big Sandy took advantage and made the right plays in transition for breakaway points throughout the game.

“When teams press you like that, they want you to take a quick shot. At the same time, you want to be aggressive and take what they give you,” said Wildcat coach Kevin Foster. “For the most part, our decision making was good and we attacked when we needed to. Our two key points were not turning it over and getting those rebounds.”

With reportedly limited time on the court so far this season, Corrigan is still working on consistent success as they took the runner-up spot.

“They are learning how to win. Once they get their legs ready where we can full-court press for 32 minutes, I will give it about two to more weeks and I think we will be ready to go,” said Corrigan coach Greg Devers.

The Wildcats established an early lead, thanks in part to a foul-and-one by senior Elias Bullock. However, physical play by Corrigan was able to cut it to just a 12-10 lead for Big Sandy going into the second period.

Both defenses played tough in the second, but Wildcat senior Kaden Foster eventually helped extend the lead for Big Sandy with a corner 3-pointer.
Tra Thomas answered back with a step-up 3-pointer, then getting to the free-throw line to tie the game at 20.

Big Sandy took the lead back with some breakaway points, along with junior Tavian Battise knocking down a late 3-pointer to make it a 30-23 game at halftime.

The Wildcats began to open up a double-digit lead in the third period, which included an open look behind the arc for Bullock.

Despite some offensive breaks, things started to fall apart for the Bulldogs on defense, as Big Sandy put together a long string of breakaway points later in the third.

The Wildcats further extended their already dominant lead in the fourth period to finish the night with the tournament win.

The Big Sandy Lady Wildcats won first place in their home tournament with a 44-30 victory over the Woden Lady Eagles.

Big Sandy had a recipe for success in setting up long-distance shots for much of the tournament, including the championship match against Woden.

“In the springtime, we worked a lot on trying to drive and attack. Although, we do rely primarily on that [outside] shot,” said Big Sandy coach Ryan Alec.

“We try to do some small things. When we can get the defense to collapse on us, then we can move the ball around to our shooters.”

Woden was able to keep pace for most of the first period until Thompson found three-straight and unanswered 3-pointers for Big Sandy. This included a one from downtown at the buzzer and Big Sandy held a 15-6 lead after the first.

The Lady Eagles cut it closer early in the second period and tightened up its defense to limit any open space for Big Sandy.

However, senior Lady Cat Corynn Kaleh would receive an assist from junior Savannah Poncho for an open 3 to take back momentum. Woden also struggled with turnovers late in the second, so Big Sandy maintained control with a 25-14 halftime lead.

Two-straight 3-pointers by junior Lady Cat Faith Geller in the third period helped Big Sandy begin to open it up even further with a 42-28 lead going into the fourth. Big Sandy would maintain that comfortable lead in the final period to win the championship match.