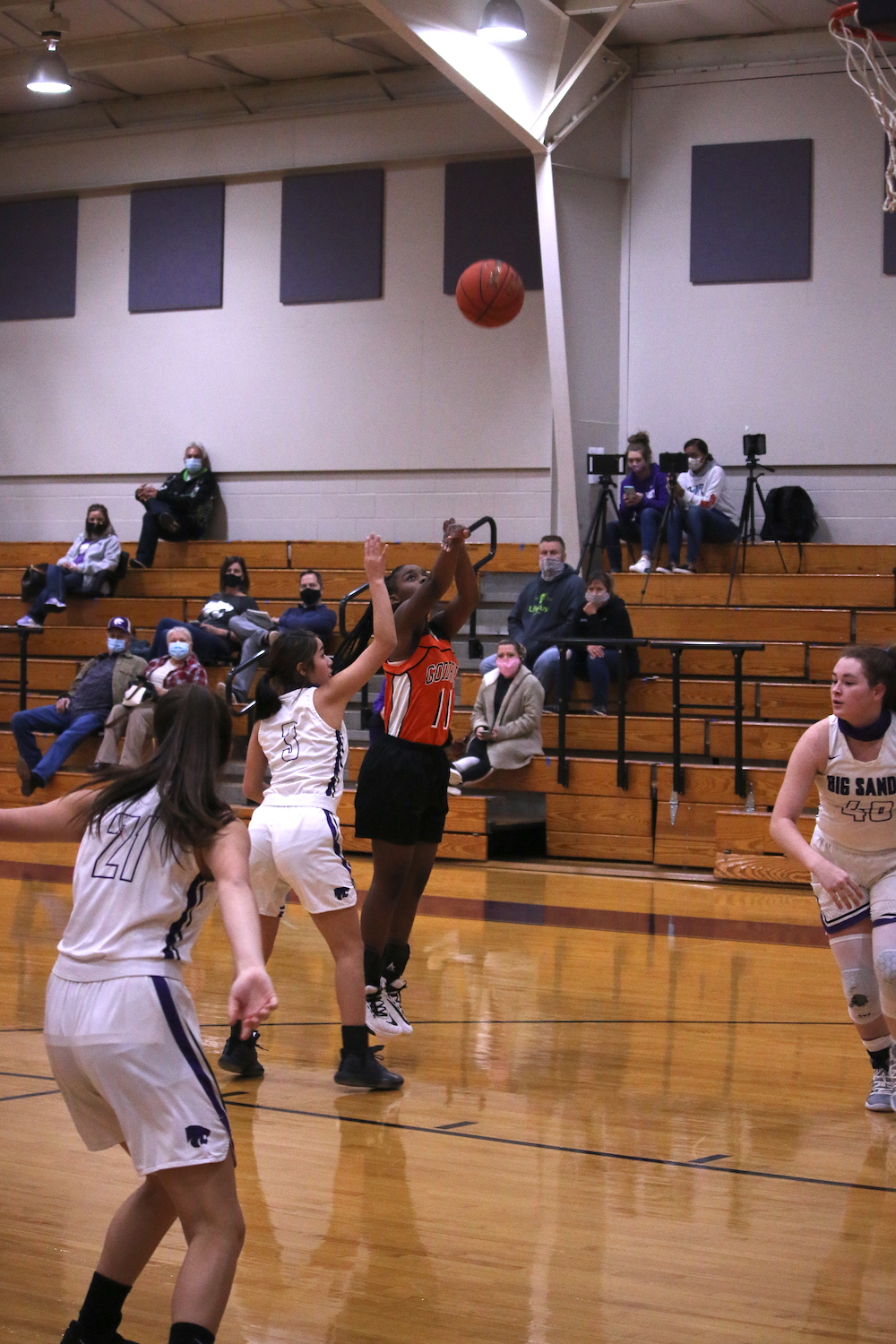 PHOTO BY BRIAN BESCH I PCE Jamya Garrett shoots a jumper in the first half Tuesday.

The Big Sandy Lady Cats came back from their turkey-day break by defeating intra-county foe Goodrich 71-15 Tuesday night in Dallardsville.

The game was never in doubt, as the Lady Cats scored just a few seconds after the tip and held the lead throughout the competition. Big Sandy was led by sophomore Alexis Thompson, who scored 13 points in the first quarter, on her way to 28 for the game.

“We didn't shoot the ball very well tonight as much as I would like for us to,” he said. “Offensively, I thought we executed as best we could. We had good ball movement around the perimeter, but I thought we missed our post players on the inside a little bit. In the second half, we tried to fix that a little more and go inside. I thought we did a better job going to our bigs and trying to score down low. Early in the first half, I thought we were trying to settle for too many 3-pointers on the outside. We weren't making them, so we have to figure out something else to do.”

The home team outscored the Lady Hornets 21-2 in the first quarter and led 37-4 at the half. Savannah Hoffman had 13 points for the Lady Cats and Faith Geller added a dozen. For Goodrich, Aralyn Angel led with seven points, Latrina Morgan had five and Jamya Garrett ended with three.

The Big Sandy boss liked what he saw on the defensive end, holding the Lady Hornets to minimal success.

“We played our zone defense and we tried to be aggressive out of it,” Alec said. “In the second half, we played a little bit of man. We are trying to figure out who we are and figure out our identity and what type of defense we are better at. I thought our first half defense was much better than our second half, but we still have a lot of work that we have to do in order for us to run both defenses to perfection. It's one of those things that we have to work on every day.”

For Goodrich, the Lady Hornets are coming off a hard-fought win just before the Thanksgiving holidays.

“I feel like the last game they played a lot better,” Goodrich coach Khadijah Carter said. “We played the Livingston game against the freshmen. We've just got to get more competitive.”

In the game with Livingston, Goodrich played with only four on the court for the entire fourth quarter. Carter said the team was up 10 or 15 points to begin the period and Livingston closed the gap to four points before the Lady Hornets took the win.

“(Versus Livingston,) we actually moved the ball around and we were getting open shots,” Carter said. “Most of our points came from in the paint. It was a lot of high-low and stuff like that. We had a girl foul out, so we just had to get in a box set. We managed with that for a little bit and our sophomore stepped up, bringing the ball down the court, because they doubled our point guard.”

The coach believes that confidence is a factor with her team and she wants to build in that area during non-district before heading into league play, which begins next week.