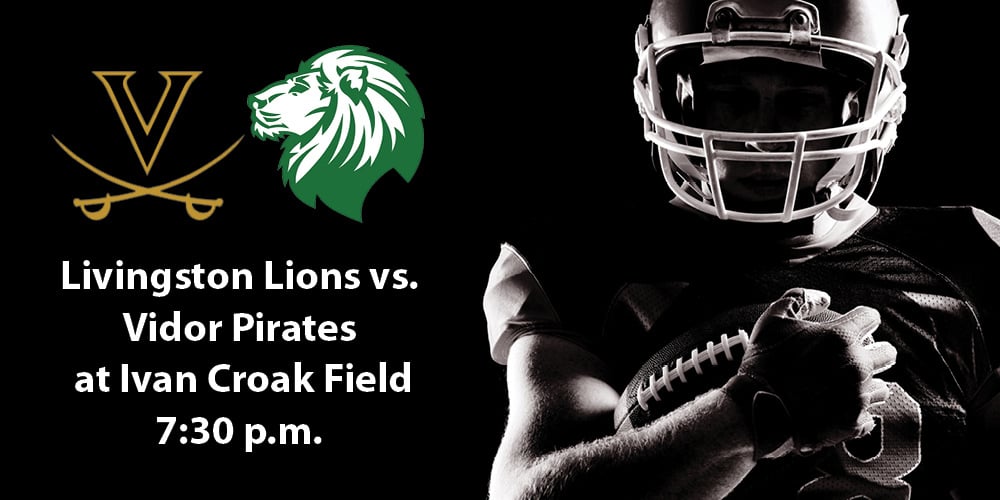 Lion football will need to recover from a 35-12 loss to Little Cypress-Mauriceville quickly, because a physical team awaits them in the Golden Triangle Friday. Livingston is now 3-4 on the season, but 1-1 in district. The 1-1 mark in 10-4A Div. I ties them with LC-M, Hargrave, and Vidor. Lumberton sits atop the league with a 2-0 mark.

“It is going to be a physical deal and Vidor plays like they always have,” Livingston coach Finis Vanover said of this week’s opponent. “They play like they weigh 250 pounds and run 4.4 40s. There may not be a guy on the team over 200 pounds, but they play with great passion and toughness. If we can match their passion for the game and it is that important to us, I think our skill level can take over and put us on top. Their entire program is built on toughness. If it is a scheduled 15-round fight, they want to go 18. We just have to match their desire to play fast and tough.

“We are shorthanded and we need to make some changes on some things that we were really getting good at, both defensively and offensively. Without Connor in there, things have to change.”

Defensive end and running back Connor Starr was hobbled after a run Friday with an ankle sprain. He will not be available Friday versus the Pirates.
“That happens to everybody and you have to be able to replace folks. That’s why you have a bench and depth and why everyone has been practicing the whole time,” Vanover said. “Someone has to rise up and fill in. We don’t have one guy that will be able to do all the things that he did, but we have three or four on both sides of the ball that can give us the same thing he gave us at defensive end and running back.

Penalties have continued to be a problem for the Lions. It is an area the team can clean up that will show immediate results.

“We didn’t shoot ourselves in the foot the other night, we blew our whole leg off. We looked like Alabama on Saturday with their record-setting penalty performance. It destroys the greatest teams. We had about 125 yards of offense and possibly two scoring possessions called back on penalties that we created. Every one of them were game-changing momentum stoppers.”

There is no wondering what the Vidor offense will look like. For the past couple of decades, Coach Jeff Mathews and the Pirates have been in a Slot-T and are very likely to lead the district in rushing once again. They now have 2,198 yards as a team, over 300 more than Livingston, who is next on that list. It is rare that they pass (186 yards on the season), but defensive backs have to be on alert for the surprise.

Jason Watson has 678 yards and an average of 6.52 per carry, good for third in the district. Daigen Venable is two spots behind with 451 yards and a 5.43 average. Dane Villadsen rounds out the top 10 with 314 yards, but an average of 8.49 per tote.“They all trained under Curtis Barbay and will give you a wing to one side and a nasty slot to the other, a two-back offset, or all three of them in the backfield. They use motion, but will attack those off-tackle gaps like crazy. They use the counter and then the buck sweep. They sprint to the line and snap the ball. When you start coming down, they throw it over your head. You have to be simple and sound and tough in what you do defensively. The defensive backs can’t come and help until they know he’s broken the line of scrimmage with the ball. It isn’t fun to coach against or play against, but it is pretty fun to watch. They are going to bust a couple and we have to match them immediately.”

This week, more than any other, the Lions will need to get off to a good start. They were in a 14-0 hole versus Little Cypress-Mauriceville just a few minutes into the game. A start like that this week may put the team in a position from which they cannot recover.
Vidor will again be in a 50-front defense. They are lacking the size the team possessed last year, but the coach says this year’s version makes up for it in effort.

“They are aggressive and real quick. I don’t think there’s a guy on their defense over 200 pounds. They explode off the ball real fast and get from A to B. You have to get in there after them and hammer them just like they want to do. They pursue like crazy and if somebody gets beat, there are three more covering for them about six yards later. They are extremely well coached on both sides of the ball at what they do. They understand the parameters of their talent. From a pure coaching standpoint, it is a pleasure to watch them.”

Livingston’s Zaylon Bogany leads the district in tackles for loss with nine, but just behind him are a pair of Pirates. Tate Ardis has eight and Blayden Laughlin has seven. Those two are also a few of the team’s leading tacklers, along with Bryce Dubois, Westin Baker, Aiden Vallafano, Kruz Lozano and Brayden Root. Jason Watson leads 10-4A in sacks with six.

A large step toward the postseason was taken two weeks ago when the Lions were able to defeat Hargrave. Additional wins will improve seeding that would make the first-round game more advantageous.

“I’ve got all the confidence in the world in our kids,” the coach said of his team. “We had a great Saturday after a bitter, disappointing thing. There was a bunch of walking wounded in here Saturday morning and a lot of it was just the psychology of it and exacerbated by a loss. Their pride was hurt as bad as their bodies were and made it feel worse. I love our kids to death and they are doing everything they can to win. They are playing tough.”