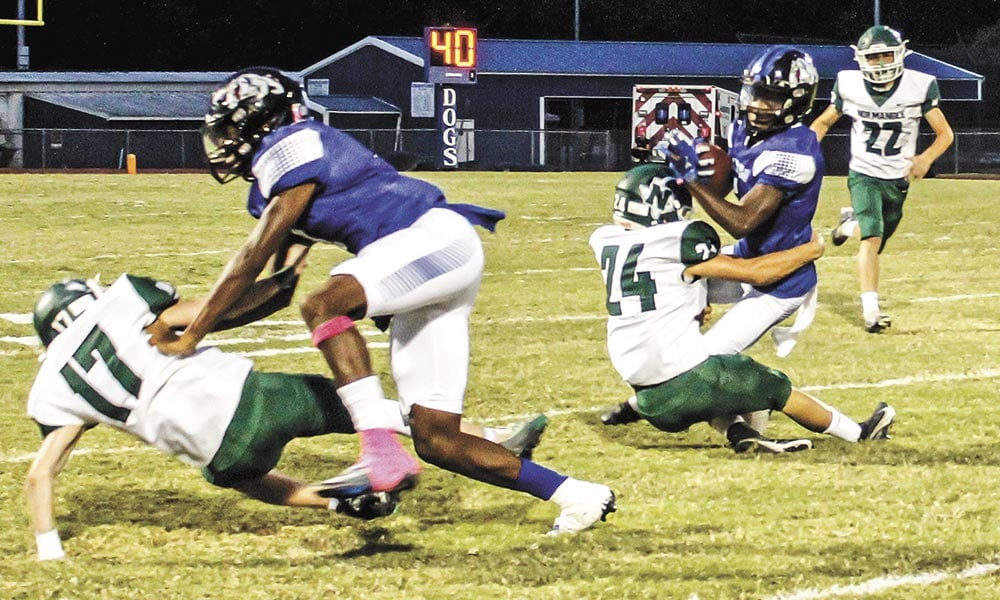 The Corrigan-Camden Bulldogs dominated week one of district play with a 51-0 shutout win against the Normangee Panthers Friday.

The Bulldog offense had one of its strongest performances in recent history and managed to score at will with multiple playmakers as the game progressed.

“This game allowed us to be more multiple on offense, which is what we had been working on during the open week.” said Bulldog head coach Brett Ratliff. “We were able to open up tonight and it was fun.”

Corrigan’s defense was also back in full form, delivering its first shutout of the year.

“That was our goal all along. Coach (Amaro) Villareal said it was time to shut somebody out.” Ratliff said. “We played some good football teams and had points scored on us, but we held out teams when we needed to.”

Bulldog senior quarterback Christian Guzman returned under center to start Friday’s game and broke away for a huge gain into the red zone.
However, the Bulldogs were unable to cash in points and turned the ball over on a fourth-and-goal.

Normangee suffered a quick three-and-out to start and Corrigan would quickly get another short field. This time, Bulldog senior running back Ja’Varion Williams would take the snap and break tackles for an early touchdown run.

The Bulldog offense found another spark late in the first quarter with Guzman throwing a bomb to Williams into the red zone. This set up a walk into the end zone by senior Anthony Harrell to extend the early lead.

Early in the second quarter, Guzman would keep the ball and take it all the way for a long touchdown to make it a three-score game.

Things got even worse for the Panthers with the following short kickoff recovered by Corrigan. Harrell would finish that drive going up the middle near the goal line for another Bulldog touchdown.

Guzman continued to strike gold with the run attack, speeding past the right side for a long touchdown run. Bulldog junior receiver Tony Cooper also caught a touchdown pass in the second to help put the game away several minutes before halftime.

With a comfortable 42-0 halftime lead, Harrell later intercepted a pass attempt from Panther senior quarterback Kade Stone in the third quarter. This set up a late touchdown run by Williams.

Bulldog senior kicker Pablo Jimenez capped off the night in the fourth quarter with a 35-yard field goal in the closing minutes.

Corrigan will host its next district game this Friday against the Leon Cougars, with kickoff set for 7 p.m. at Bulldog Stadium.