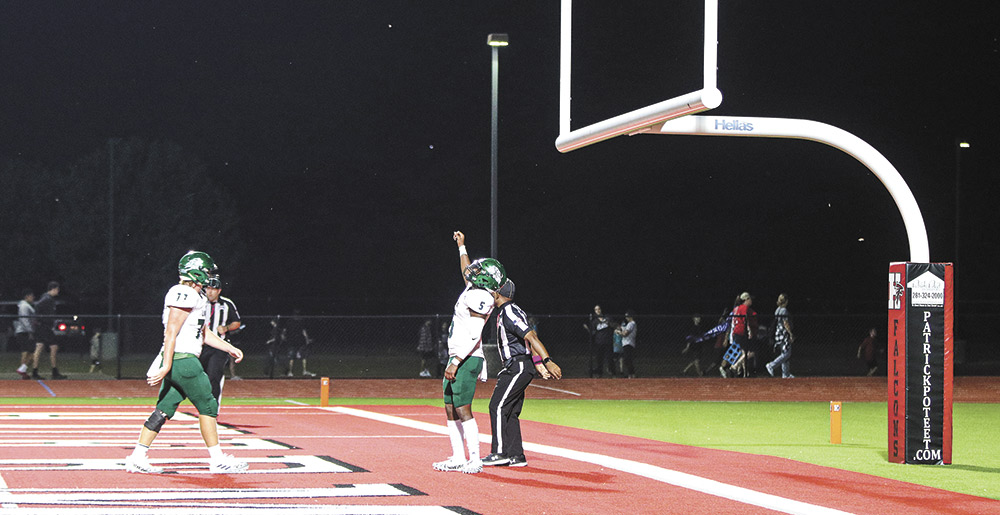 Behind their most impressive offensive output in many years, the Livingston Lions steamrolled the Hargrave Falcons 69-34 in Huffman Friday.

Tied at 21 near the end of the first half, Livingston scored two touchdowns in the final 1:47 to go up 34-21 before the break.

“We played fast and physical and sound as can be,” Livingston coach Finis Vanover said. “We got some penalties, but they were all aggressive penalties that we committed. They matched us score for score and they wouldn’t go away. We found two or three little things that they had no capability of stopping and we just stayed in it. Offensively, we were absolutely amazing.”

The Falcons were able to stay in the game behind 355 yards passing from quarterback Justin Evans.

Once again, the offensive line was key to Livingston’s success. Hargrave did not have an answer for a unit that bludgeoned them for 235 rushing yards in the first half and 403 rushing yards for the game.

“We absolutely mugged them up front,” Vanover said. “They were pass blocking our defense like crazy to begin with and we couldn’t get a rush. We gave up a couple of big scores because we couldn’t get a rush, but the minute we started getting to the passer, it was over. We told them that nobody plays them this way, and nobody attacks them unmercifully and dares them man to man. It was a great team victory on both sides of the ball.”

The first Lion possession of the second half produced a 15-play, 55-yard drive of over eight minutes for a touchdown. The coach said the plan at halftime was executed well.

“We told them that if we can run 11 minutes off the clock in that first possession, we’re going to do it. You’d better be patient and you better be excited and happy that we’re making three and four yards each play. We were going to make (Hargrave) like it all the way down the field. We needed to be ruthless in that first drive and get points and take a ton of time off that clock, and we did it.”

Vanover said Friday was the most impressive offensive performance since he has been at Livingston.

Quarterback Ta McNeal added 133 yards and two touchdowns through the air, both to Chevy Peters. McNeal needed just one passing attempt in the second half.

McNeal also scored on the ground – along with Landon Leggett, Trendon Williams and three from Connor Starr.

The Lions put up points in all three phases, with a blocked punt by Connor Starr resulting in a recovery in the end zone, and a 92-yard fumble recovery by McNeal.

Starr had 12 carries for 116 yards and Williams carried nine times for 103 yards to lead the Lions. The quarterbacks also combined for 100 yards, as McNeal had 68 and sophomore Demorian Hill had 40.