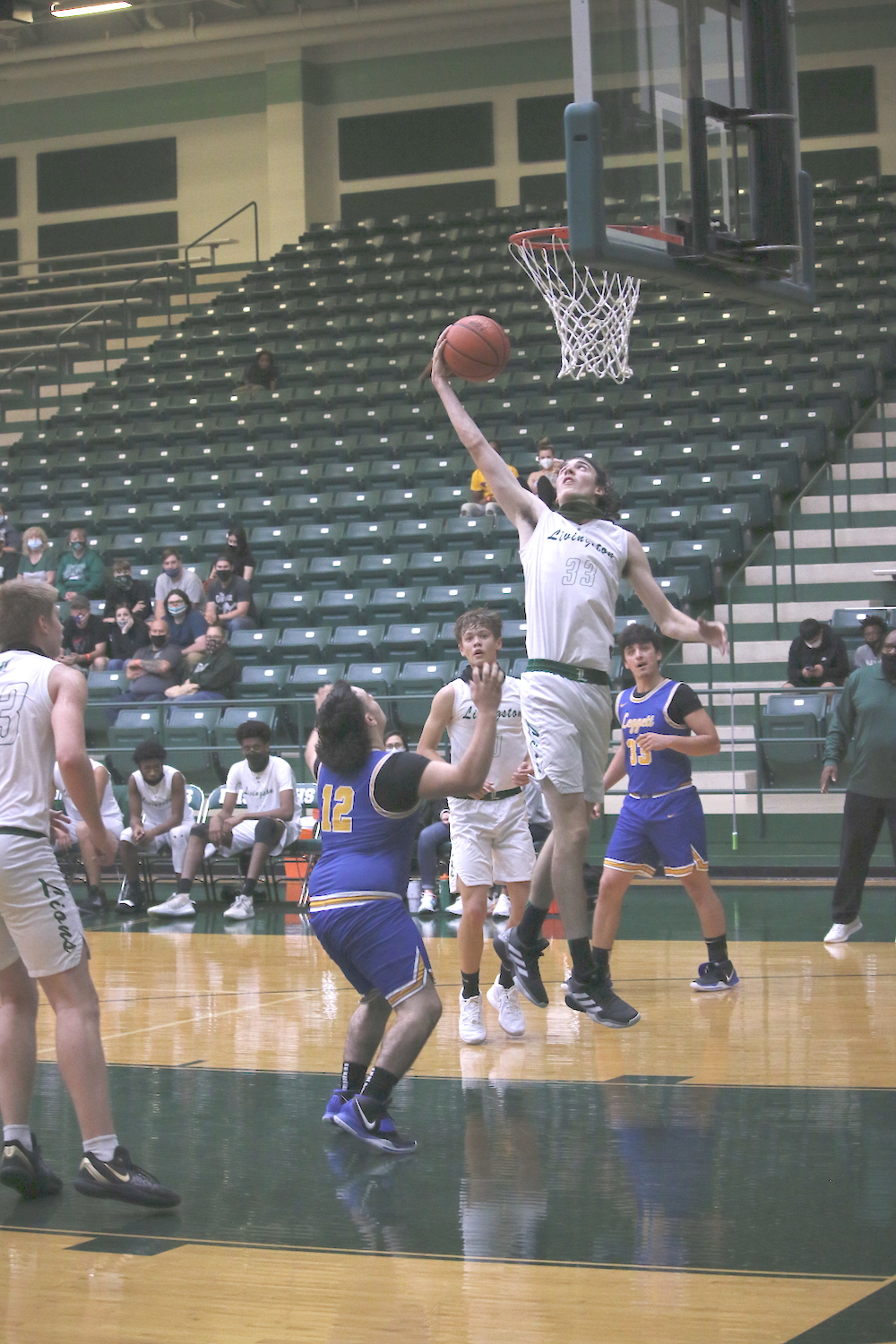 BRIAN BESCH | PCE Livingston took a 60-44 home win over the 1A powerhouse.

LIVINGSTON - The Leggett Pirates and Livingston Lions did not exactly ease into the season with cupcake games. The two Polk County schools squared off against each other Saturday, with Livingston taking a 60-44 home win over the 1A powerhouse.

Leggett actually began the contest with a 7-0 lead, as the Lions needed a few minutes to adjust to the game's speed.

"It started out real good, but we just have to do a better job of protecting the paint and matching up with other teams," Leggett head coach Sean Edwards said. "Coach (Calvin) Phillips knows what he is doing over there and they are going to be OK. Livingston is going to be competitive this year. He even has three guys that he is missing, so he is even going to be better.”

Even though the Lions were missing a few due to football, they were able to show off a deep bench. Eight of the nine players dressed for the game contributed points.

Jeston Kowis led all scores with 16 points for Livingston, newcomer Adyn Stewart had a dozen and Gage Morris had nine. For Leggett, Varian Flournoy had 12, Chase Parrish had 10. Both Jacoby Sells and freshman Josh Perkins finished with seven points.

Just as last year’s team, Livingston possesses plenty of size, even adding some for the latest version.

That proved to be a difficult task for the smaller Pirates.

State-ranked Leggett may not have the offensive firepower as they have the past few years, but the team will still be able to collect plenty of wins on the 1A level.

“It is going to be defense,” Edwards said of keys to success. “We have to control the tempo, it is simple and easy. We are not going to be scoring 95 or 100 this year. We have to play defense and take it possession by possession. Of course, I'm
going to coach to what I have, so that's what we have to do.”

The Lions may have a few different ways to earn victories in the 2020-21 season. Their size should prove to be an asset both on defense and in rebounding, but they will also receive an injection of speed now that football season has come to an end.

"It's going to let us do what we want to do," new Lion head coach Calvin Phillips said. "The press with Julian (Gardner) and Izzy (Enard), that is going to be our quicks up front. We can play a lot more man-to-man in full court like I want, but it all depends on what we see, how we break down film and see what works best for us. I'm not trying to be a big entertainer; we just have to get some wins. (The additional players) will give us some more shooters too."

Phillips said aggression has been a big key and something emphasized in practices. Once the team regained its footing Saturday, aggression made the difference in the outcome.

“We started off kind of slow and we were a little bit soft and backing off, but once the aggression came around and we started hitting the floor and started getting turnovers, I thought that was the difference in the game right there," Phillips said. "We got some breakaway shots and Coach (Stephen) Seaback works transition every day. Overall, every phase of the game was OK, but we still have a lot of work to do. I was impressed with the half-court game. We went to a zone, which really helped us a lot. It wasn't bad for the first game, considering who they (Leggett) are, because they play hard.”

After allowing 16 points in the first quarter, the Lions held Leggett to single digits in both the second and third period to slowly distance themselves.

Livingston was consistent on offense each quarter and outscored the Pirates in all four frames.

"Seaback and I both are always working something as far as some kind of
shooting drill," the Lion coach said. "Our pet peeve is defense and we have to stop people. It isn't going to do any good to go out there and score 100 points and
let them score 100 points. I like the fast game and I like the man-to-man defense, but you have to pick your poison. We had to fall back and play more zone than I wanted to play, but it worked out for us. All I want is a victory and get that first victory in my belt."