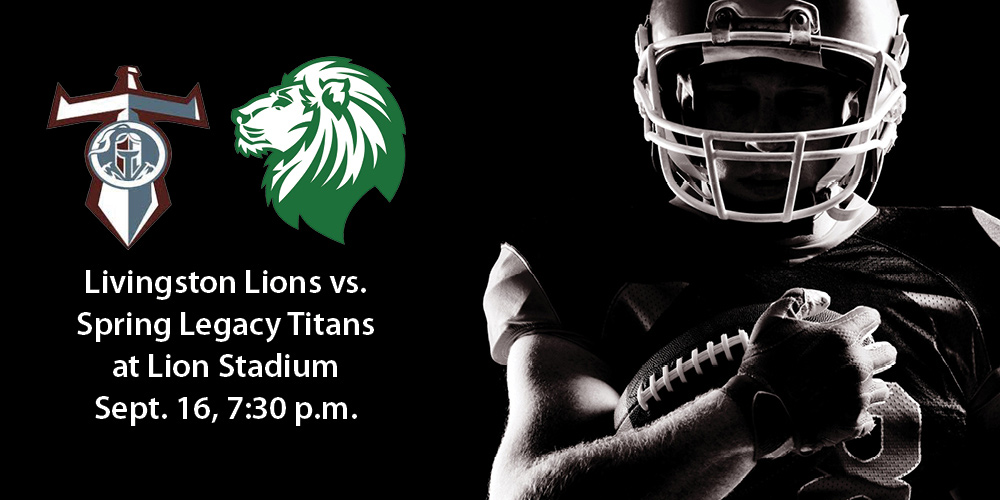 Livingston Lion football waited until the first road trip to turn in their best performance of the season. They will look to build upon that with all the distractions of homecoming Friday versus Spring
Legacy.

“If we have the same team that showed up and played Friday night, we are going to beat a lot of folks,” Lion coach Finis Vanover said of his squad. “It was a totally different mindset, physicality and performance – with the exception of some penalties. We lost on the scoreboard, but we won a whole bunch of battles Friday night in personnel, playing and confidence. We have got to clean up the mess of the kicking game and the penalties.”

Though winning the game, Palestine was outgained in total offensive yardage 279 to 215. However, the Wildcats led from the end of the first quarter to the final. The coach said his staff has been
frustrated with slow starts and that there will be a focus this week on being strong and aggressive from the first whistle.

“That part is really frustrating from a coaching standpoint. It looks like we haven’t practiced at all and don’t have our kids prepared. It takes us eight minutes to a whole quarter to get untracked and go.”

A defense that has been the pillar of the Lions finally looked the part in the third game of the season, creating turnovers and stopping the run. Connor Starr provided a big hit that resulted in a fumble, and Javean Gardner broke on a pass for an interception. A change in scheme to give defensive backs some help may have been a big difference in the defense’s performance. The Lions used the strength of the unit – defensive linemen – to get more pressure into the backfield. The result was a defense that allowed very little between the tackles.

“The defense came out and was doing a super job,” Vanover said. “It was our best defensive performance in a long time. We felt that was going to happen. We did all the things we wanted. We got the ball away from them, we had picks, we had fumble recoveries, we had goal line stands. It is hard to play much better high school defense than we did the other night against a good team.

“We’ve done fairly well offensively at times. It was the first time in a long time we were able to throw the ball deep and catch it to score.

Last week was the first game action for quarterback Jontavian McNeal, and the senior got started in a big way. He scored three touchdowns – one each by reception, rushing and passing – and was the game’s
leading rusher with 140 yards.

“Jontavian gives us some threats that we didn’t have and we were able to stand in the pocket and throw the ball, letting them rush outside. That is a big asset and helps. We had two fabulous catches on that last drive. One was with (wide receiver Dylan) Murphy on an out route, where we needed eight yards and picked up 11. Then, we came back three plays later and hit the big tight end (Nick Smith) on a post across the middle while sitting in the pocket.”

Legacy (1-2) has been a few different teams in their three games, dropping a heartbreaker in the final seconds versus Huffman Hargrave 28-27, defeating a tough Orangefield team 40-30, then getting blown out by Celina 60-22 last week.
Legacy will show a 4-3 defense with two high safeties that will play zone and man under. They have surrendered nearly 40 points per game, so the Livingston offense will need to take advantage.

Offensively, Vanover said the line will be one of the biggest they face this year. They are athletic in the skill positions with a quarterback that will distribute the ball in a spread offense.

The Lion team is hoping to break into the win column this week, but to do so, they will need to avoid the distractions that accompany homecoming.

“Homecoming is really about folks that aren’t even in school. It is about folks coming back to their school and enjoying festivities of the game and activities,” the coach said. “It has turned into just the opposite. I can’t change that or fix that, but we are accountable and responsible for getting this football team ready and the players to get themselves ready. We need to bring that same team back from Friday night. If we’ll do that, I think we’ll have a wonderful night and they’ll have themselves a great homecoming dance and cap off the week of festivities.”