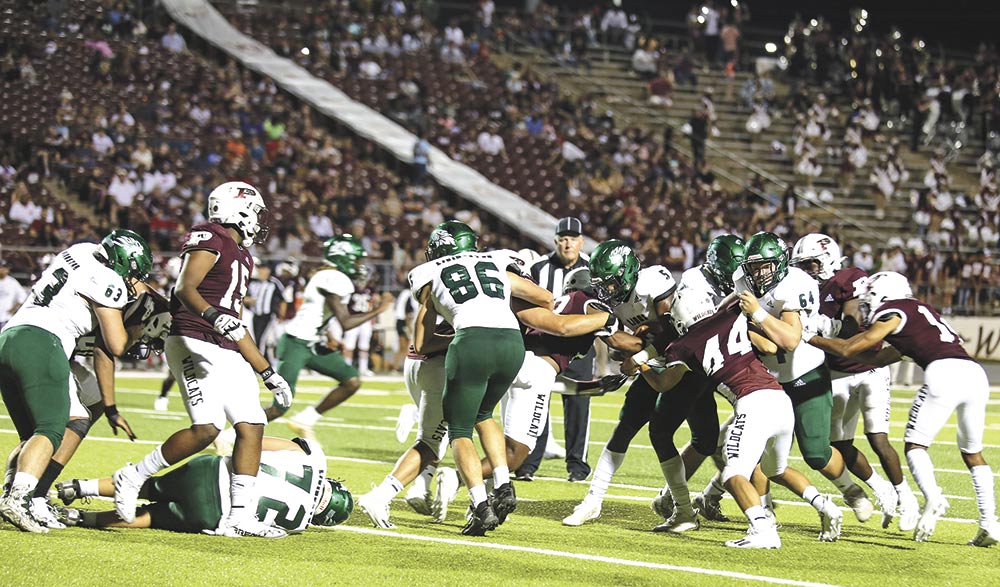 The offensive line drives the Palestine defense back. Photo by Drew Dunson

Mistakes and penalties in the first half cost Livingston football a chance at its first win, falling 24-18 Friday in Palestine.
The Lions are 0-3 on the season, but continue to show improvement in each loss. Palestine (2-1) took advantage of the slow start, punching in three first-half touchdowns to coast the remainder of the way.

A few possessions after Elijah Walker’s two-yard run to put the Wildcats up 7-0, Jontavian McNeal took an option keeper and sprinted upfield for 47 yards and a Lion six-pointer. The extra point was missed, keeping Palestine in front of a 7-6 score.
The ‘Cats answered with a 70-yard strike on blown coverage, as Elijah Walker was left open to increase the margin to eight. Walker soon struck again for a 17-yard run, going up 21-6 at the half.

Penalties and field position killed Lion chances in the first half. Livingston shot themselves in the foot with eight flags for 62 yards. Two key infractions negated 120 yards in the air and a touchdown. The Lions would end the night with 13 penalties.

“Eleven of those penalties were probably boneheaded errors,” Lion coach Finis Vanover said. “That first quarter was a nightmare and I’ve never seen anything like it in my life. It puts you behind the eight ball right off the bat.”

Livingston was the better team in the second half. They were able to drive the ball, yet didn’t always produce points. Palestine was held to a field goal, and had trouble running the ball between the tackles all night.

One play after taking possession at the Wildcat 27 in the third quarter, McNeal floated a well-placed pass to Chevy Peters, closing the gap to 21-12.

On the Lions’ final drive, an 11-play march ended in Jakob St. Martin rolling left, then turning and throwing right to McNeal, who sidestepped a defender and ran into the end zone.

“What an effort,” Vanover said. “We were playing good defense and we really felt good about bottling these guys up and holding them – and we did. The defense played like we’ve been expecting them to and like they have the last two years. They rose to the occasion tonight. At times, offensively, we did. We outmanned them physically on both sides of the ball. We had to find a little mismatches and the little cracks and attack straight downhill. We dropped too many balls again and some crucial ones. We did a great job of protecting (the quarterback), but we had to wait so long to get open.”

The play of McNeal kept the Lions in the game. He had touchdowns by running, catching and throwing to account for the three Livingston scores. He toted the ball 20 times for 140 yards and threw for another 65. The senior had less than two days to prepare for his first game of the year.

“I thought both (quarterbacks) did a great job of coming in under duress from Wednesday on and picking this thing up,” the coach said.
“Ta has a little more experience and athleticism in doing that and he came through to perform really well. He didn’t make many poor decisions. His play was good enough to help us win. Our punting killed us tonight and we gave them great field position. It looked like wewere kicking an egg.”

Livingston will return to Lion Stadium next week to take on Spring Legacy.