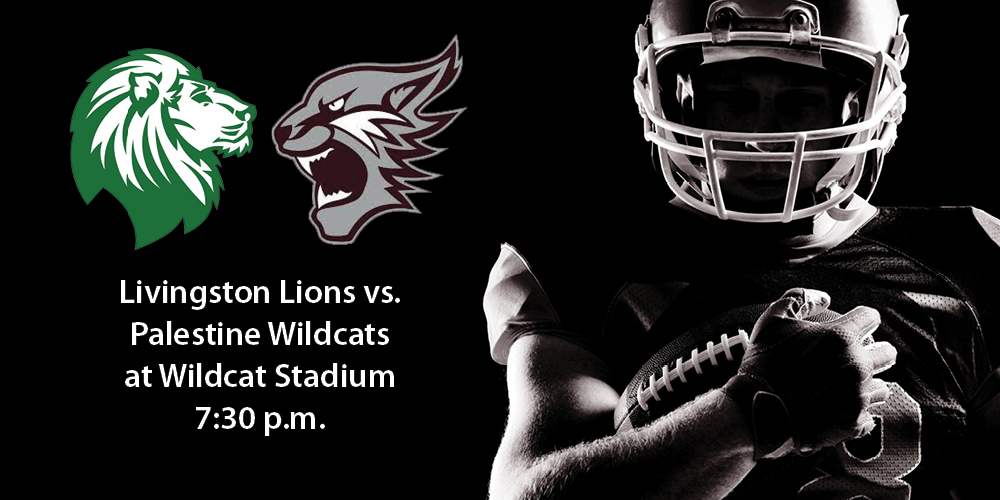 Livingston football is 0-2 after a 44-19 loss to Needville, and will have another stiff challenge Friday in Palestine.

The team is mostly healthy, but may be without a key lineman for the game this week. Lion coach Finis Vanover praised the line’s play from the Needville loss, saying they turned in one of the best performances of the past year.

“The offensive line was just wonderful,” he said. “Coach (James) Herrera and (Emmanuel) Rivera have done a great job with those kids and continue their improvement. They blocked wonderfully and good enough to win in most cases. Our running backs have improved dramatically in carrying out their fakes and carrying the ball. We are still missing some blocks here and there, and our fullbacks still have to understand their importance to this team to block and catch the ball.”

The coach said a few of the top rushing performers of the first two weeks may start to see more carries. In the first two games of the season, the Lions had up to eight players take handoffs.

With game experience, the defensive backs are expected to improve. The coaching staff believes a tendency to peek into the backfield on play action passes has been a large problem when covering longer routes.

Finally, special teams may see a different group on the field Friday.

“Somehow, we have to find 11 guys who will fix that,” the coach said of his kickoff and kickoff return unit.

“The areas we need improvement can be fixed — the majority of them. What you can’t fix is attitude and desire.

They have to have that inside and it has to come out. If they can’t, we have to find somebody that does have that.”

The Wildcats from Palestine are 1-1 after a 37-31 season-opening win over Nacogdoches and 40-28 loss last week to Jasper.

“Palestine has a very athletic defensive line,” Vanover said. “The linebackers are very skilled and the skill kids can cover you. They run a 3-4 defense with a very good nose and tackles. Those two end guys are very good and they always will be. They do a super job with that. They do some things with their outside linebackers, where one is rushing and one is always dropping. They double rush from the outside to stop all of our rollout stuff.”

The Wildcats haven’t had problems putting points on the board, and the Lions will have their hands full with a different look from the first two weeks.

“Offensively, they are kind of like Splendora, where it is a Slot T but they are spread out. They have a great counter play and they will run a toss. They have been running it forever. They have an athletic quarterback with tall receivers.

The offensive linemen are probably a little bit taller than our kids and they are wide. They run the ball really aggressive downhill.”

Livingston will likely attempt to keep the Palestine offense on the sidelines as much as possible with long scoring drives. Last week, that plan worked for a half, as the Lions ran 43 plays to just 13 for the Blue Jays.

Every team in District 10-4A took a loss last Friday and are searching for answers in the same manner as Livingston. Difficulties through the non-district schedule should serve as preparation when it comes time to square off against those district opponents.

“What doesn’t kill you makes you stronger. If we will trust our eyes, trust our coaching, trust each other and not lose confidence — we keep coming to work just like we did this past week — it is going to come together. Last week, we got exceptionally better. It just wasn’t good enough to beat that team. We have to take another big step in getting better.”