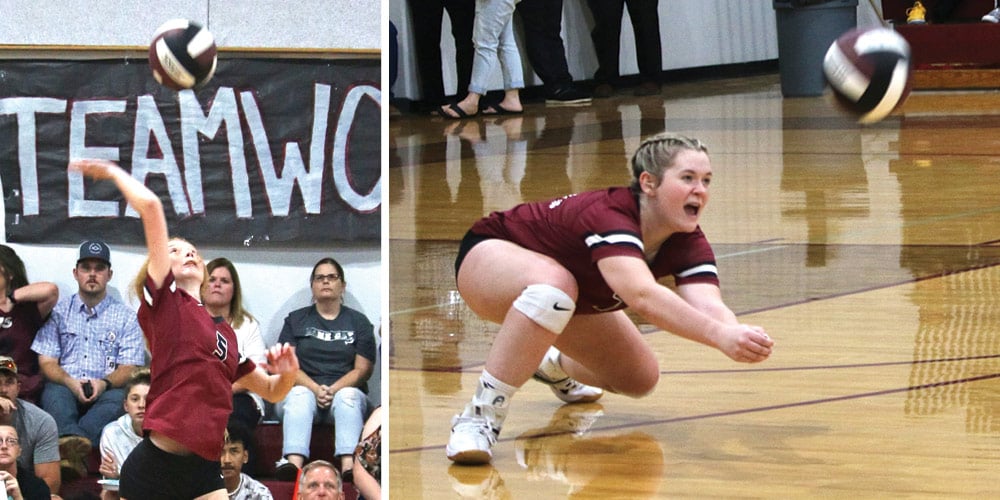 Destiny Lindley reaches for the spike. Autumn Adams gets the dig for the Lady Cats. Photos by Brian Besch

Though losing in three, the Lady Cats found a way to be competitive at some point in each set. The trouble in all sets was at the beginning, where they trailed 9-2 in the first, 6-2 in the second, and 5-0 in the third. In each of the first two, Onalaska pulled to within at least two points, and even held a lead in the final set.

A.J. Pinkert, Briseis Sabino, Keori Rogers, Kaleigh Park and Autumn Adams were consistent players versus the Lady Bobcats, but a key piece was missing. “One of our starting setter, Savannah Benningfield, is sick. The doctor set her out for a couple of days and rightfully so,” Onalaska coach Danna Mitschke said. “I moved a freshman up from the JV to fill that spot. She came in and did a good job serving and had some good plays. I have no complaints about how she played at all. We got in our own head from the onset of the first game. We had doubts because our comfort level wasn’t what it would normally be.”

Both teams struggled serving the ball Tuesday. Momentum was lost and possession changed hands several times because of a ball hit too hard or into the net. The coach said there has been a focus on serves, and believes it to be a mental issue, struggling to maintain a consistent emotional level.

Mitschke said there are three things Onalaska coaches want from the players when they step on the floor ­– getting the first serve, communicating with teammates, and making a positive impact on the team.
In a sweep of Hudson last week, the coach said her team’s serving was “spot on.”

“We fought back,” she said of the Hull-Daisetta match. “They don’t roll over and quit. They tried to fight. We struggle with change.

Destiny Lindley, it is her first year on the varsity. I had to move a freshman setter up. We have a sophomore in A.J. Pinkert and she is so athletic. She is still learning how to control her body when she is in the air. I did not think that we covered as well as we have been. I’m going to take that one, because I did not focus on that yesterday in practice. Briseis Sabino took over some libero and played great. On the back row we passed the ball up on the net several times. We were still able to fight through that.”

The Lady Cats are currently 9-9 and will next host Corrigan-Camden Tuesday, a very strong Class 2A squad from the north side of the county. District begins three days later when Shepherd comes to the lake.