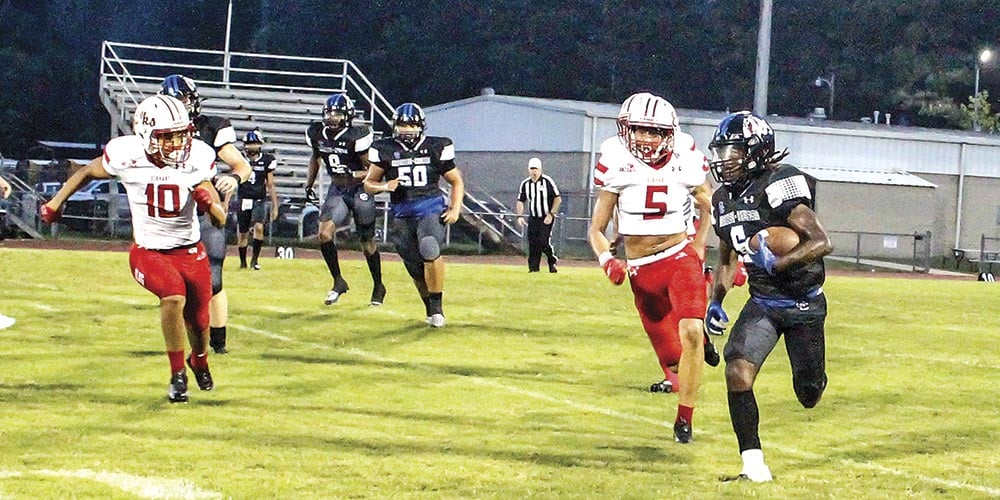 Bulldog senior back Anthony Harrell finds room along the left side on an early first-down run. Photo by Albert Trevino

The Corrigan-Camden Bulldogs established a strong halftime lead and finished with a 49-22 win against the Elkhart Elks on Friday.

Corrigan’s offense found its rhythm and never looked back, as Elkhart pulled off some early highlights in the passing game that kept it close only in the first half.

“Our defense has led the way so far and always does. To come out with a couple of communication mistakes and play against a team that throws the ball better, we need that,” said Bulldog head coach Brett Ratliff. “We are going to have to stop that if we are going to make a run like we want to.”

Elkhart struck first on its opening drive, as a breakdown in the Bulldog secondary left an open Elk receiver for a 46-yard touchdown pass from sophomore quarterback Trystyn Tidrow.

The Bulldog offense answered with senior running back Anthony Harrell breaking through the middle for a 29-yard touchdown run. Corrigan took the early 7-6 lea with the extra point.

A muffed kickoff return by Elkhart set its offense deep in their own territory, then gave up field position on a three-and-out.
It helped set up Bulldog senior quarterback Christian Guzman for a couple of big runs, leading to Harrell punching it in for another rushing touchdown to extend the lead.

The Elks would be forced to punt again from deep and Guzman threw a 30-yard pass to senior receiver JaVarion Williams in the endzone to take a 21-6 lead going into the second quarter.

Elkhart responded, as Tidrow ran for a huge gain into the red zone, then tossed a touchdown pass down the middle to junior receiver Pablo Rodarte to cut it back to a one-score game.
This would only temporarily keep it a close match, as the Bulldogs continued their fast pace going into halftime.

Guzman connected with junior receiver Bayden Lawrence on another touchdown pass.
Then, a Corrigan fumble near the goal line was quickly negated by an Elkhart fumble in the end zone for a Bulldog defensive touchdown.

“[Offensively,] we were essentially 5-for-5 in the first half.” Ratliff said. “I thought they had a pretty good plan. [Tidrow] threw the ball well. We let one guy slip by us on the defensive coverage. Then, the next drive they kind of earned it.”

The Bulldogs would run away in the second half and further extend their lead. The biggest play came in the third quarter, when Guzman ran for an 80-yard touchdown.

Corrigan will play at home again Friday at 7:30 p.m. against the Kirbyville Wildcats.