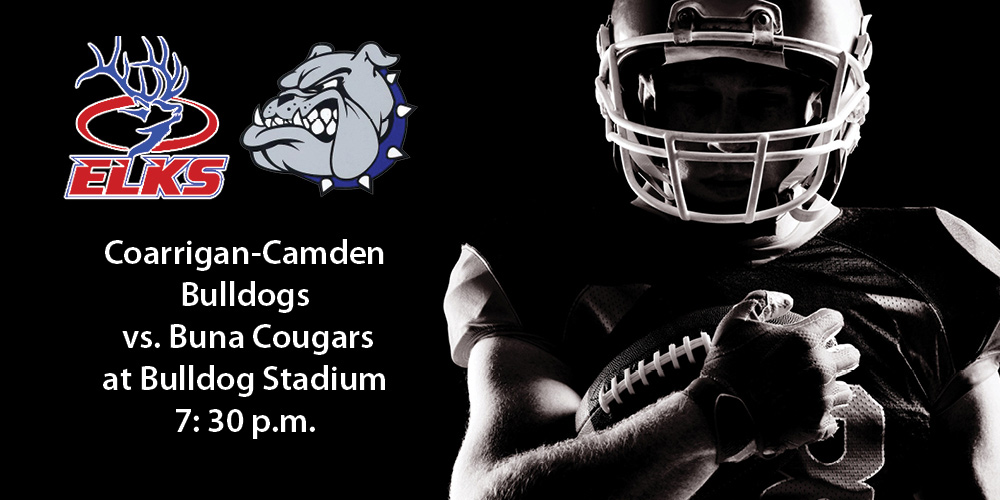 The (1-0) Corrgian-Camden Bulldogs will play their home opener this Friday against the (1-0) Elkhart Elks.
Despite some thunderstorms in the area early this week, Bulldog head coach Brett Ratliff is making sure his team gets in their field drills when possible.

“The weather is going to be hit and miss around here, but we will get out [for practice] a little anyway and try to get it done.” said Ratliff.

Corrigan held on for a week-one victory against the Buna Cougars, but Ratliff is working to improve overall from a match he feels should have been sealed just after the first half.

“I think we had an opportunity to close [Buna] out in the third quarter and really finish the game.” he said. “We did a good job in moving the chains, but I would have liked to see more explosive plays from us. [Buna’s defense] was big, strong and fast, so that is not all on us.

“On defense, we gave up the two plays — the play action pass and the screen. Those are things that we train our guys to look for. That is just discipline and we have to be a little better in that way.”

Elkhart has struggled in recent years, including against Corrigan, losing 28-14 in 2021 and 30-0 in their 2020 contest. However, the Elks come into Friday’s game with a 42-20 upset victory in week one against the Huntington Red Devils.
“I am sure they are coming off a really big high and circled our game on their schedule.” Ratliff said. “I think they feel like they have played with us at times the past two years, but were not able to get over the hump.”

Sophomore quarterback Trysten Tidrow will lead the Elkhart offense as its main asset, according to Ratliff.

“[Tidrow] is their weapon on offense and does a really good job creating off the run. He throws the short and intermediate passing game well. I think we will see more balls in the air this week, which will be a good test for our secondary.”

Ratliff expects an aggressive attack from Elkhart’s defense, including a lot of linebacker pressure and even some cornerback and safety blitzes.

“What they try to do is get us behind our sticks. If they stop us for a yard or even a loss of yardage, that puts us in a different play set. They definitely made some plays on Huntington by bringing pressure and I think they will try the samething against us.”

Kickoff for Friday’s game is set for 7:30 p.m. at Bulldog Stadium.