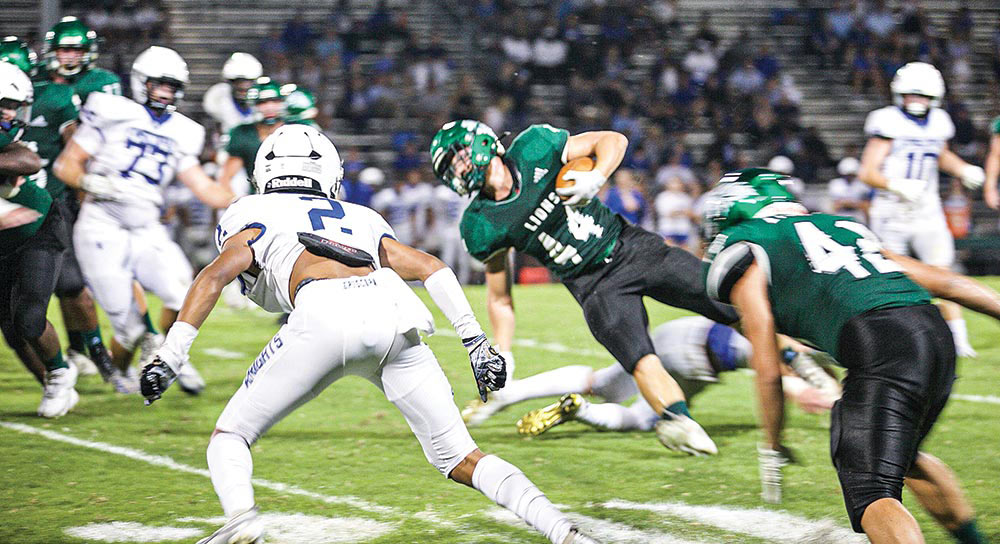 Livingston senior running back Connor Starr stretches for additional yards in Friday’s loss to Episcopal. Courtesy photosBy Brian Besch
This email address is being protected from spambots. You need JavaScript enabled to view it.

The Livingston Lions sputtered on offense and could not prevent the big play on defense, taking a 42-7 season-opening loss to Bellaire Episcopal Friday at Lion Stadium.

A Lion defense that returns many starters in the front seven, showed just how green they are in the secondary, as Knight quarterback Karson Gordon put on a show. While the Livingston defensive line and linebackers pressured the junior star, he still found ways to make plays.

Gordon had touchdown runs of 81 and 77 yards, while 13-for-21 in the air for 278 yards and four scoring strikes. Jackson Chavis led receivers with six catches for 147 yards and three touchdowns. Breylan Thompson also had six grabs for 104 yards.

“The quarterback and receivers were about like what we faced in the scrimmages and we couldn’t do anything about it,” Livingston coach Finis Vanover said. “Their receivers are super, they are well coached and they are drilled — playing in every 7-on-7 tournament in America. I can’t say enough good things about them. You have to line up and beat teams like that. To be able to do it, you have to get in there and slug it out with them.”

Down 14-0, the Lions drove 46 yards down to the Episcopal 8-yard line. On fourth down, a quick slant to Chevy Peters was dropped. Gaining possession again, the Knights took three plays to go 92 yards in just 41 seconds for a score.
“I wanted (their offense) to sit over there and watch us (from the sidelines) in that first quarter,” Vanover said. “We got the drive down there and had four possessions in the first half inside their 20 that we should have scored on — something. We found a way to just shoot ourselves in the foot. You can’t have missed opportunities against something that high powered.

“We’ve got to find our identity and who we are. Some of them aren’t ready. They thought they were, and they love the fact that they’ve got on those varsity silks. They got to go to the pep rally and have their names on the list for the travel squad. They forgot that there is a dogfight out here. Those guys (Episcopal) don’t care who is on the list.”

Vanover said Episcopal coach Steve Leisz told him the 2022 team is the best he’s had. He said that seven years ago, they were probably the best private school team in the country, but lost six key players to injury before the fifth game. This year’s team is thought to be better.

For Livingston, aJakob St. Martin had 12 carries for 53 yards and a touchdown. He was 11-for-24 in the air for 101 yards and an interception. Nine different Lion receivers caught a pass. 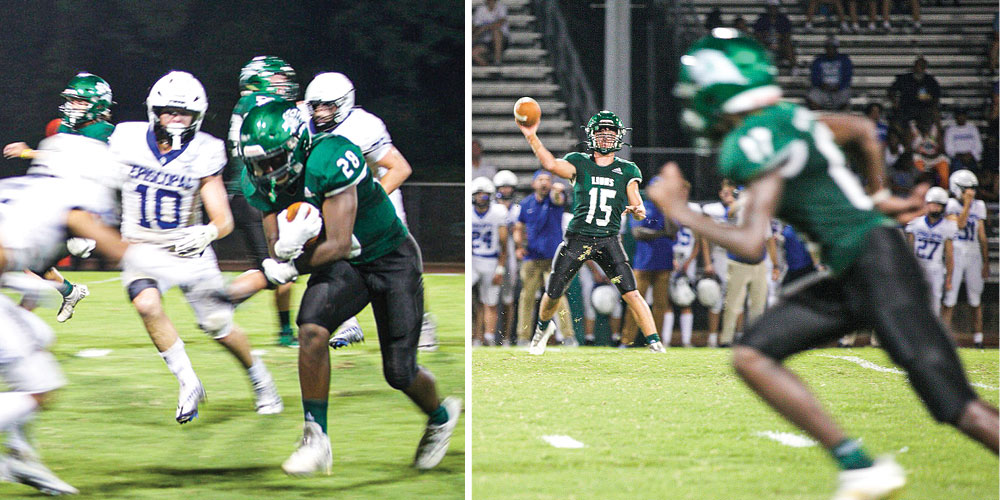 Sophomore Jerren James ran for 44 yards, leading Lion running backs for the night.Livingston quarterback Jacob St. Martin sets to throw a wide receiver screen. The senior threw for 101 yards, and ran for 53 and a touchdown.

Trailing 35-0, the Lions took an eight-play drive 83 yards in 5:54 of clock to finally enter the end zone. Some of the biggest offensive plays occurred on the march, with Jerren James (seven carries, 44 yards) collecting 18 on a run and St. Martin completing a 35-yard pass to Brayden Ethier. Points were earned when St. Martin rolled left on an option, keeping for six yards.

“St. Martin did OK, and did some things for us, and we found a couple of running backs,” Vanover said. “I am a little disappointed in some of the guys who felt they were a little too bumped up to play anymore. I don’t like that we got beat like that on the scoreboard, but (Episcopal) had a lot to do with that. We had a lot to do with taking ourselves out and saying that we can’t go anymore. That is concerning. I haven’t had that out here in four years. We’ve got some things to address. Folks may not like me saying that, but we have to get busy. We weren’t ready to play a team of that caliber.”