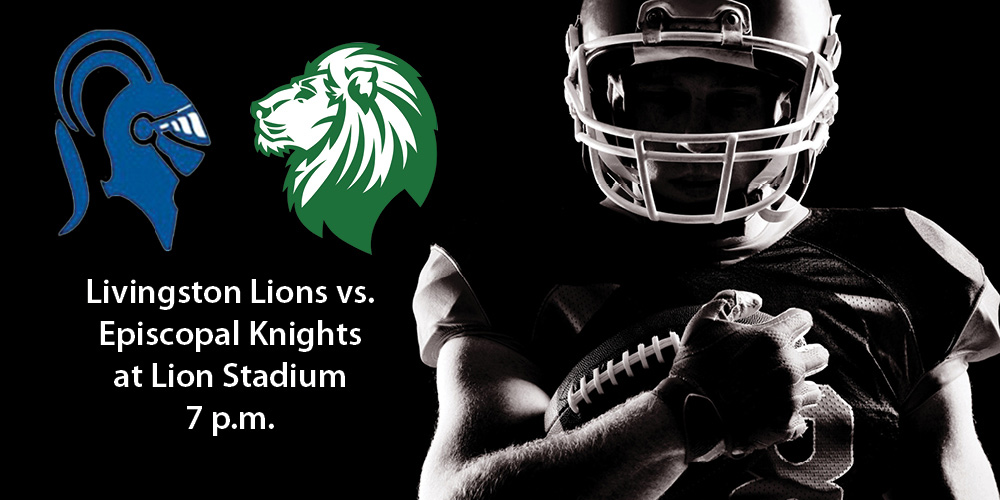 The 2022 Livingston Lions take the first steps that matter Friday, when Bellaire Episcopal travels to Polk County. There are many unknowns as the season kicks off, like a new Lion offense and several players getting their first varsity snaps. Episcopal is also a bit of an unknown.

Weather has much to do with the questions. Livingston had both of their scrimmages cut short due to lightning, and Episcopal was not able to take part in a second scrimmage.

“We have a general idea about them, just like they do about us,” Lion coach Finis Vanover said. “We both have a little film on each other and we both have each other’s Vidor game from last year. We have that and about 20 plays of scrimmage film from this year. It will truly be a big-play performance on the field, with who can break something. Special teams is really going to weigh into it.

“We have some of what they played against Sealy (in a scrimmage). That is a good, quality program with some of the same type of athletes that we have. The preparation for them had to be very similar. They are a spread, true to the book, just like we faced last week. Needville (the Lions’ second game) comes up the same way, unless they just totally changed.”

The coach was happy to get the small amount of plays that he did last week against Hardin-Jefferson. The Hawks are a spread team, just as many on the schedule will run. Episcopal on the other hand, was not able to get off the bus last week.

“They’ve got a great quarterback that transferred in from the Fort Bend schools,” Vanover said. “That is what you get with the larger, more established parochial schools in the Greater Houston area. They do a good job of recruiting and have open enrollment. He is a fine quarterback and a tall, rangy kid. They will have some big plays with their offense with picks and rolls, and playing basketball on grass.”

Facing a similar offense in the scrimmage, the coach was pleased with his defense’s performance on all but a few plays. Missed assignments and missed tackles were responsible for large gainers. Tackling in the secondary will be key, as the Lions hope to keep the offense in front of them and having to earn points on long drives.

In the run game, expect to see plenty of zone read option from the Knights, while wide receiver screens and bubble screens will be an extension of that.
“They have a defensive end that is really noticeable,” the coach said, shifting to defense. “He is a good player as a rush end that likes to come after you. They have a sound secondary, and are identical to what we saw last week on the front. It is an odd-man front with a 50-type defense. We’ll see a nose tackle. Their tackles are more like ends in our scheme and their defensive ends are like our linebackers, where one of them is rushing and the other is in coverage. They are always going to stay in a cover four with two safeties and two corners. They will drop some people, doing some underneath stuff. They have very good footwork and technique in the secondary.”

Coach Steve Leisz has been at the program since 2007. The past two years have not been the best, going 5-10 in shortened seasons due to Covid. However, the Knights were a combined 64-17-1 over an impressive eight-year stretch before.

For Livingston, a ball control offense looking to grind out yards on the ground will likely be key for a passing game that is not established.
Jakob St. Martin will start at quarterback and provides a running threat himself. The Lions have no shortage of running backs, at around eight and able to shuttle a new one each down, if they so desired.

“If there’s anyone who deserves a chance to move into a limelight spot, it’s Jakob St. Martin. For two years, he’s been the quintessential understudy. He played receiver and caught a few balls and did a little mop up duty (at quarterback), but every time he did, something special happened. He came in as quarterback and made two or three unbelievable runs, dipping and darting.”

The coach said he couldn’t be more happy or proud or a player that he is of St. Martin. He praised the quarterback’s work ethic over the spring and offseason to ready himself for Friday.

Similarly, the staff feels good about its offensive line. There are also around eight in that position group ready to go for the first game. Most all players will be expected to go both ways, but Livingston has hopes that many of the big guys on offense can play exclusively on that side of the ball.
Look for a freshman or two to play varsity games immediately. There is some need on the field, but Vanover said he has some ninth graders that will be too talented to keep off the roster. The same will be the case for several sophomores. Many of the underclassmen have challenged juniors and seniors for starting roles and Vanover expects that to continue through the non-district schedule.

The Lion secondary is young and will be tested early in the first two non-district games, with Episcopal and Needville both running a spread concept. While maybe not ideal, the coach likes the opportunity for his inexperienced defensive backs to see plenty of action in preparation for the remainder of the season.

“I think it is what we need. It is the only way we are going to get better. They have got to get after it. We can’t hide them; we are a man-to-man team. They are not big or physical type guys or bone crushers when they tackle, but they need to get on a guy and hang on. They’ve got great feet, hips and leaping ability. That is why they are back there. I think it’ll be great preparation. I think we did really well against Hardin-Jefferson. They are quick learners, but we just can’t wait too long to learn. We have to exhibit our knowledge and not let them score three or four before they do.”

The Lions will begin to find answers on Friday. Those answers should indicate whether this year’s team more resembles the district champions of 2020 or the disappointment of missing the postseason in 2021.

“This is going to be a fun team to coach. There will be some frustrations and some growing pains. I may be cue ball bald by the end of the season, pulling what little hair I have out, but, they are fun and I wouldn’t trade them. We are really close and having a good time together, and they are fun to be around. They listen and do what is expected.”