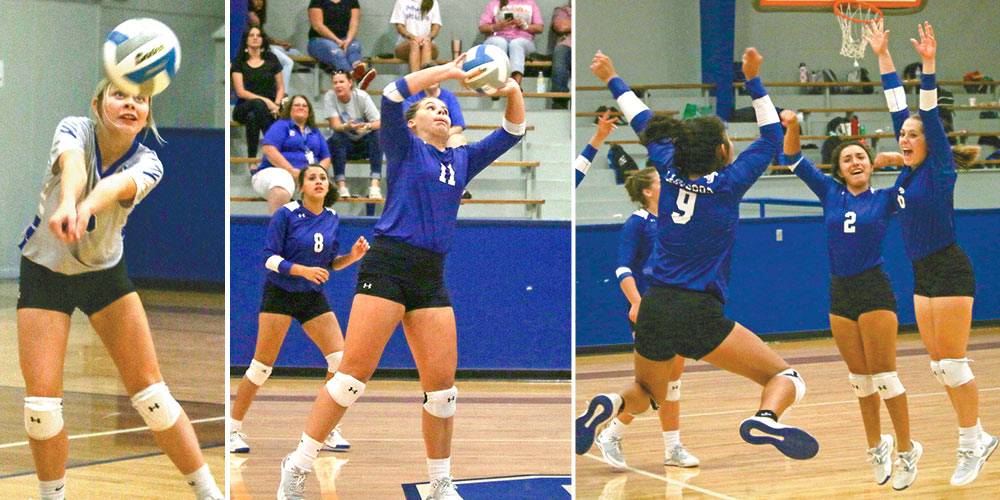 Sarah Downey sets up a teammate for the spike. Tangela Yates flips the ball back over.The Lady Bulldogs celebrate the wining point Tuesday over Shepherd. Photos by Brian Besch

The Corrigan-Camden Lady Dogs picked up their fourth win of the volleyball season Tuesday night at home over Shepherd, taking the final three sets. The 23-25, 25-18, 25-11, and 25-20 was competitive for the majority of the match.

After a deficit of 5-0, Shepherd tied the first set at nine and thecontest remained close until the Lady Pirates secured the two-point win. The roles were reversed in the second, when Shepherd took an early lead and Corrigan prevailed.

The third set was the only of the night that was not close, as the Lady Dogs took a commanding 17-3 advantage before winning comfortably.

“We got a little sleepy at the beginning,” Corrigan-Camden coach Sage Gardner said. “It was finally getting in the groove of it and coming back.”

Only a few players are back from the 2021 playoff squad. Carrie Burris, Kathryn Fisher, and Addison Garcia absorbed plenty of playing time last year. However, the rest of the team is fairly new to the varsity game. Two freshmen, Allonah Foss and Brissa Pablo, have spots in the starting lineup.

“Like any freshmen, they are going to make little freshman mistakes, but they are playing their hearts out for me right now,” Gardner said.

“We are kind of senior-heavy in a sense, but we are super new at the bottom. We are learning to gel together and learning to trust each other.”

Corrigan-Camden opened the season by welcoming Class 5A Porter, with the Lady Dogs making the last set very competitive. The competition was on the same level in the latest tournament. Traveling to Central Heights, bracket play versus Leon, Tatum, Nacogdoches, Arp, Timpson and Crawford made for an extremely difficult couple of days.

“I told the girls that I want the toughest competition in non-district. We are trying to get some tough ones to prepare for district, so it looks a little easier then.”

The Lady Bulldogs beat Nacogdoches, then Elysian Fields the next day.

The tournament ended with games versus Arp for the second time and Westfield. The team is now 4-7. The only Class 2A schools they have seen to this point is Timpson and perennial power Leon.

Shepherd has also dropped in classification, now in Class 3A, where they will have the new experience of being the big fish in a small pond. To compound the positives, the volleyball program has seen an increase in participants this year.

“I think our seniors right now are carrying the team,” Lady Pirate coach Sarah Evans said. “We have about eight seniors, with seven on varsity right now. It is kind of hard working them in on different spots, but they are stepping up to different positions, which is all I can ask for as a coach. I’ve got another senior who has really never been a setter and she is over here setting. Just working with a new setter – because we graduated three – everybody is stepping into those new roles as a senior and that is tough.”

Colmesneil was the first regular season game, where the coach said her team looked good, but out of place a bit. She likes the energy on the court currently and believes her team is having fun for the first time. They have taken victories over Woodville and Colmesneil so far.

“The season as a whole, I think we have more energy and more outlook,” Evans said. “We are positive. We think that we are going to win and we know that we can compete to the end. Whether we are successful, we don’t know yet. But, we go all out and I like that. I am happy that we are dropping down to 3A, because it finally gives us a chance to compete. We are coming to fight. For the first time, we have numbers.

We had so many that we had to do cuts this year. It’s impressive, the growth within the program, and I’m excited to see where we go from here.”