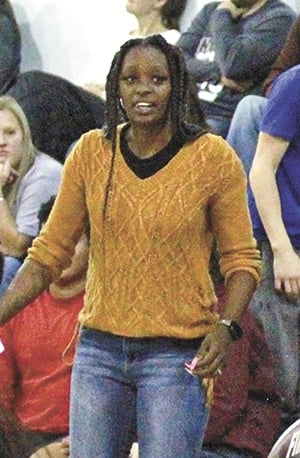 Khadijah Carter Corrigan-Camden girls head coachBy Brian Besch
This email address is being protected from spambots. You need JavaScript enabled to view it.

On the court, Khadijah Carter has excelled in an award-winning high school career and played at the top level of college ball. She recently accepted just her second head coaching position at Corrigan-Camden High.

Carter took over a struggling program just a few years ago, helping turn around attitudes and performances. She looks to do the same on the opposite end of Polk County for the Lady Bulldogs.

“They told me that it should be pretty good and that I have some from junior high that are coming up,” Carter said. “Basically, they were saying that they need somebody to push them to not quit. If they will not quit, they can be a success.”

Carter’s job will be to take a group of athletes accustomed to playing at the Class 3A level and provide basketball skills to win in 2A. It has been a while since the Lady ‘Dogs have reached the basketball playoffs, and leadership in Corrigan is counting on a few personnel moves to change fortunes.

Former coach Ryan Hall will move down to the junior high, while serving as the new Dean of Students and vgirls’ athletic coordinator. Hall will help the youth develop a better understanding of the game, setting a foundation for when they reach high school.

This is the third stop for Carter since leaving her own basketball career at the University of Alabama. She was an All-State and All-American performer at Goodrich High, which is also where she began coaching. After a one-year stop in Coldspring, she takes over Corrigan-Camden girls basketball and will assist in volleyball and track.

She is a 2012 graduate of Goodrich, where she was a Parade High School All-American who averaged 34.6 points per game and scored over 1,000 points in her senior year alone. She was a three-time TGCA All-State honoree and was an ESPN Rise Regional Girls Basketball Player of the Week. Her college days started Jacksonville College for her freshman year, where she was named NJCAA First Team All-American. She finished her final three college seasons with the Crimson Tide.

“It is a better environment and a head coaching position,” Carter said of reasons for taking the new challenge. “That is something that really stood out to me. I am going to be pulling kids in and have one-on-one time with them. That is something that I like to do. I won’t have a huge class, and that is something that caught my attention. They can help me finish getting certified. They have a group of girls coming in and they felt like I was the perfect fit.

“That was a big thing that they said. They had a lot of people bring up my name, saying that I would be a good fit. Honestly, I didn’t know that they were looking for a coach until Coach (and athletic director Brett) Ratliff called me. I think (new Corrigan-Camden boys basketball) Coach (Greg) Devers put in a good word for me. At that time, it was perfect.”

The coach will also serve as an interventionist, helping students individually outside of a classroom setting.
Carter said she will need a good look at her team before deciding on a style of play.

“If they are athletic, then yes, we are going to press. We are going to do a little man (man-to-man defense), but if we are not up to that level yet, we will try a zone — probably a 2-3 zone.

“I just want to do a little bit at a time,” she said of installing a new system. “I don’t want to give them too much where they can’t handle it. We want to break it down into little pieces and by the time the season starts, we should be there.By district time, they will be ready, I will make sure of that.”

Meeting the Corrigan-Camden staff and coaches, Carter knew she had made the right choice on her first day at work.
“I honestly felt like I was at home. Everyone was coming up to me, seeing if I had questions and checking up on me. It was just like I knew them. They are very welcoming.”