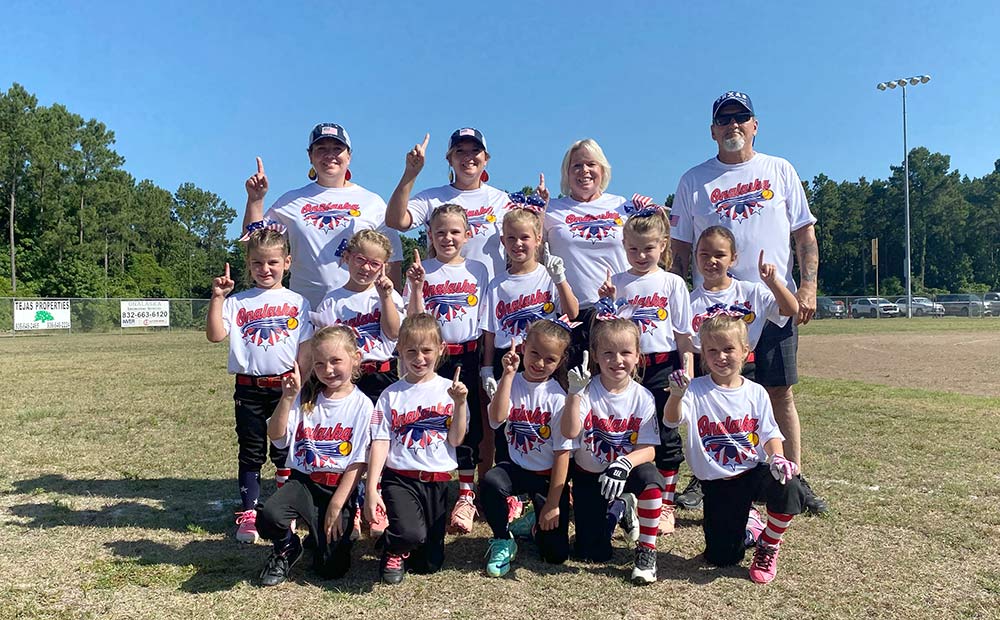 They are the best in Texas. The Onalaska 6U group of four-, five- and six-year-olds have captured the Sweetees X-play state championship and will move on to the World Series.

“After the regular season, we form an All-Star team. This team is the All-Star team and we just won the state tournament for our division,” head coach Amanda Williamson explained. “Now, we move on to the World Series and it is in Louisiana on July 29 through Aug. 4.”

The Onalaska team will represent the Lone Star State in Tioga, Louisiana. To win the state tournament, the local softballers defeated a squad from Central, Texas.

“They work their booty off,” Williamson said. “They don’t just go out and play; we have practice anywhere from two to three times per week and we practice in the heat of the day. That way, they are really used to the heat. They are constantly working. We still had the tee in the state tournament, but in the World Series there are no tees. It is strictly coach-pitch. We did coach-pitch during the season, but after three coach-pitches, they got to go to the tee.”

Williams credits the team’s work into our practices to winning the lengthy contest. In the title game for state, the team from Onalaska won a three-hour marathon by a score of 32-22 in five innings. It was highlighted by a home run by Avery Cowart.

“I want them to win and I want them to do good,” the coach said. “The night before the state tournament, I did not sleep at all.”

Once in Louisiana, seven other teams will compete with the Onalaska girls, with their first game Saturday, July 30 in a double elimination tournament.