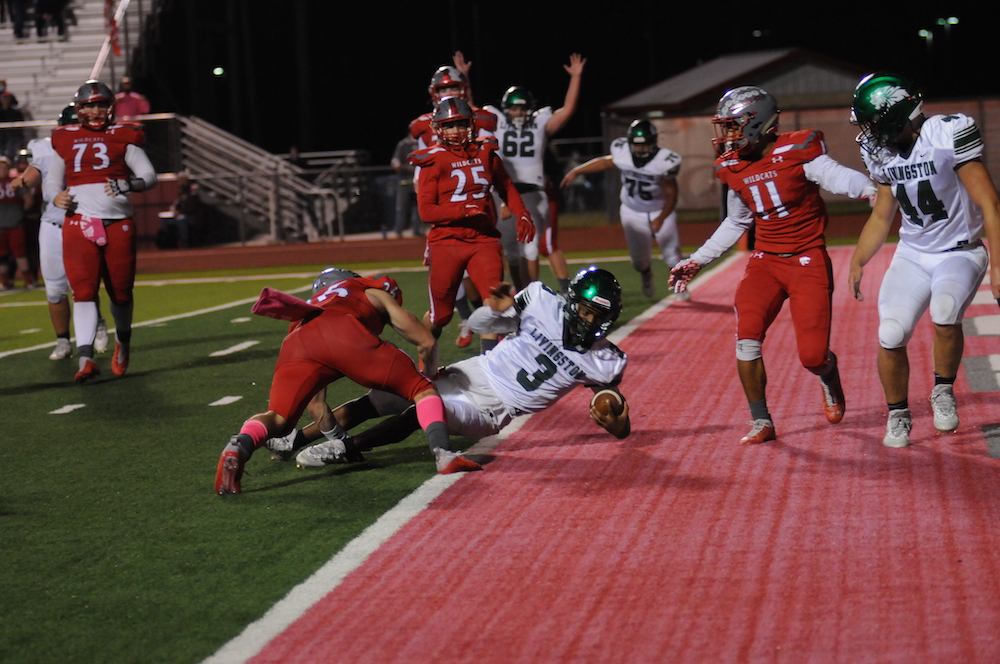 MONTGOMERY COUNTY – Livingston football keeps rolling, defeating the rival Wildcats 35-14 in Splendora Friday night. The team utilized the efforts of its defense and a balanced attack on offense to win in impressive fashion.

The Livingston Lions have become one of the better stories of Class 4A football in 2020. A team for which many predicted a basement finish has won five straight games, has a 2-0 record in district play, and is trending toward a spot in the playoffs for the first time since 2012.

“That was a long time coming,” Livingston head coach Finis Vanover said. “Three years of grueling misery, shame, embarrassment and whippings. These seniors stuck it out and went through three years of that misery and they have made a commitment and a promise, and they are fulfilling every bit of it right now. All it took was to trust us to show you how to get there and you have to trust the Lord’s gift that you have and not waste it.”

It was just two years ago that Splendora defeated the Lions 87-21, with not-so-subtle celebrations after each score. Last year, the Wildcats enjoyed a 48-15 win on the same field. Proud of the team’s performance, the coach said accomplishments like the win Friday were something that would not have happened in the past.

“Not the last two years, but this fall when they showed up, the way they scrimmaged and the way they played Needville, I knew there was something really special going on. We are not as good as we can even be yet. That is the beauty. They (Splendora) are tapped out,” Vanover said pointing to the opposing sideline. “They can't play any better than they have the last two or three weeks. They got matched physically tonight, speed beat them, scheme beat them, and a kneel down on the 1-yard line.”

Livingston quarterback Damian Ruiz then led two touchdown drives, ending the first with a 26-yard touchdown strike to Julian Gardner and another on a six-yard run.

The Wildcats’ Zane Obregon, who had both Splendora touchdowns and 106 yards rushing, scored once more. But the home team’s success ended there.

The Lion defense that has been the squad’s reliable unit made a few adjustments and did not allow further damage.

“We made some personnel movements and coach went to a different front,” Vanover said of the defense. “There was just a change in alignment with them and we moved them around to try to get them in some spaces. We couldn't match up with them and it took us that first series to realize that. We had to bring some blitzes and bring some heat from different directions and the coaches did a great job adjusting during the first half, but especially at halftime. (Defensive coordinator Dalton Murray), the secondary coaches and the outside linebacker guys did a great job getting the kids clued in on what we needed to do the second half to get some stops.”

Ruiz (9-for-15, 219 yards, INT, 3 TDs) would later hit Izzy Enard on a 25-yard touchdown pass, sneak in his second rushing six-pointer, and find Gardner again for a 52-yard pass to score.

Gardner had five catches for 141 yards and two touchdowns. If that wasn’t enough, the junior standout added an interception while playing defense.