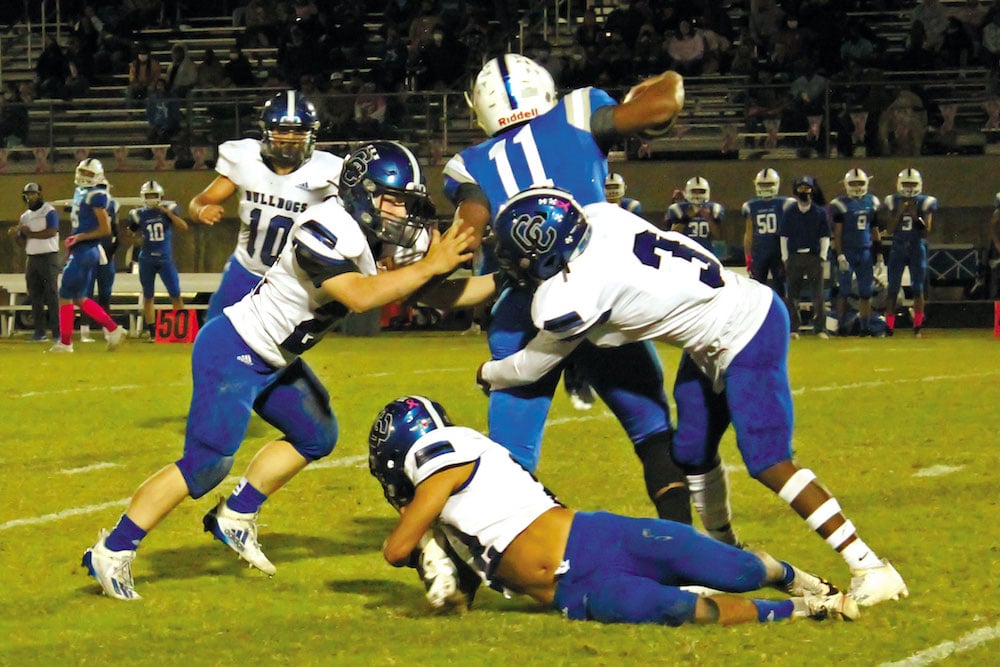 PHOTO BY ALBERT TREVINO The Corrigan-Camden defense takes down an Anderson-Shiro running back during Friday’s 6-0 loss in Anderson.

POLK COUNTY– The Corrigan-Camden Bulldogs fell to the Anderson-Shiro Fighting Owls in a 6-0 shutout from Grimes County.

In a low-scoring showcase for both defenses, the Owls needed just one scoring possession to make the difference in Friday’s district matchup.

Anderson-Shiro’s defense locked down on the Bulldog rush attack and put consistent pressure on sophomore quarterback Christian Hood throughout the night.

On the opening drive, Corrigan’s offense put together a couple of runs to get past midfield before stalling out and having to punt. The Bulldogs continued to struggle in the first quarter with three-consecutive three-and-outs inside their own territory.

The Owls also had trouble moving the ball early, although they averaged stronger field position.

The Bulldog defense made key stops in the first half to help prevent Anderson-Shiro from reaching the red zone. This included a turnover on downs and two straight three-and-outs.

Late in the second quarter, Corrigan started to find some rhythm, marching down the field from their own 8-yard line. Hood threw a first-down pass to sophomore running back JaVarion Williams, then ran the ball to help reach Owl territory.

However, time ran out for Corrigan and the offense suffered two straight sacks looking for the deep pass play. This left it scoreless at halftime.

Anderson-Shiro came out swinging in the third quarter and shocked the Bulldog defense with a quick scoring drive that would ultimately decide the match.

Owl senior quarterback Cole Werner and senior tight end Kelvin Adair both ran for large chucks to reach a first and goal. This set up Adair for a one-yard touchdown run up the middle with the missed extra point for a six-point game.

Corrigan’s offense continued to show decline in the second half, while the defense bounced back to prevent any further big-play opportunities for the Owls. Williams made the defensive play of the game late in the fourth quarter with an interception in the end zone.

Despite having two more chances to respond in the fourth quarter, the Bulldogs could not establish field position beyond a couple of first-down conversions.

In the final minutes during Corrigan’s last possession, Hood converted on a fourth down with a pass to Williams to reach near midfield. The Owls responded with more pressure on Hood and forced a quick turnover on downs to seal the game.

Corrigan is set to host the New Waverly Bulldogs for the next district game this Friday.