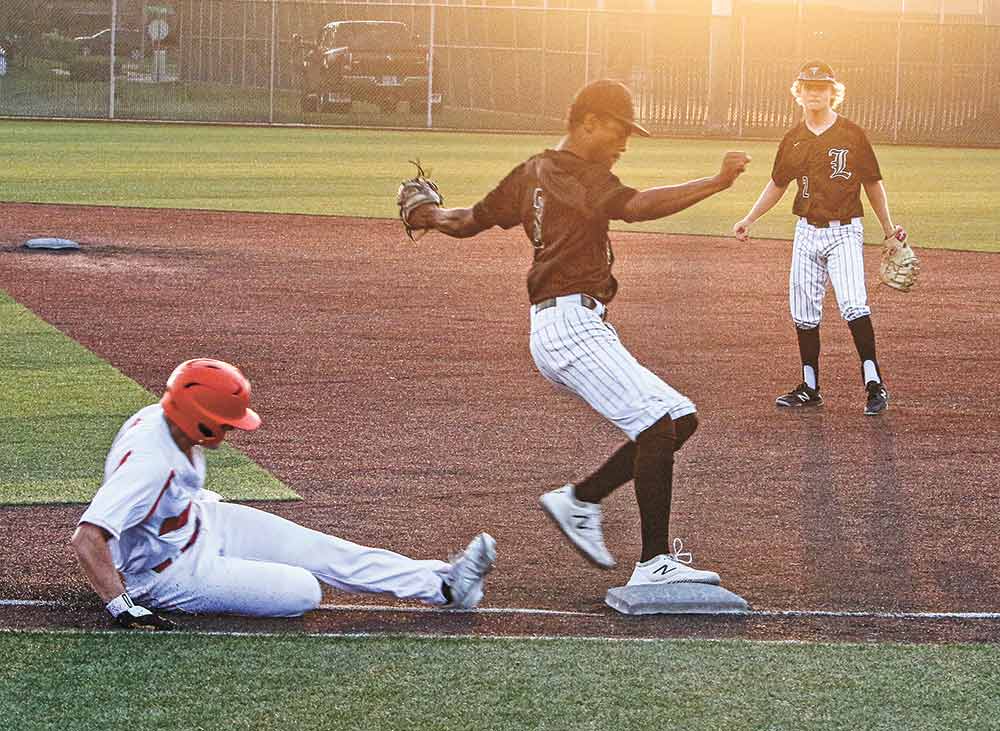 Pitcher Damian Ruiz takes the toss from first baseman Caden Vickery for the force out.

One of the state’s top teams in Class 4A swept a two-game regional quarterfinal set with Livingston, ending the Lion baseball season.

Orangefield, ranked No. 3 in Texas, won the opening game 12-6 Thursday, then finished with a 12-1 victory Friday night.

The Lions fell behind in the first inning, when a leadoff triple and wild pitch delivered the game’s first run. Two more Bobcats crossed the plate on a ground-rule double with the bases loaded in the third.

Livingston answered in the fourth inning, starting with a single from Damian Ruiz. He stole second base and Josh Smith singled. Vickery brought Ruiz in to score on a single, and Jordan Bush did the same for Smith.

A two-run homer extended the Orangefield lead back to three runs in the fourth, but the Lions again had an answer.

With the bases loaded, Smith was caught leaning too far off the bag at first. A rundown resulted in a Bobcat throwing error and two Lions scored on the play, closing the gap to a 5-4 Orangefield lead.

That would be as close as the game would get. In the bottom half, the Bobcats scored again, then six more times for insurance in the sixth.

Not giving in, Livingston put up two more runs, starting with a Gage Morris double. Ruiz also doubled to allow Morris easy access to the plate, and Smith singled in Ruiz.

“We knew they were going to be tough like that,” Lions coach Jarrad Maddox said. “We just have to bounce back tomorrow and battle, that is all there is to it. They are 27-2 for a reason. We have to throw strikes and we have to hit our spots and we have to score runs. We need to get ahead, and we can’t fight from behind. I told them that we have two more games to win and we have to come back and fight.”

Unfortunately for Livingston, that would not occur.

The second game started well for the Lions. Morris walked and Jordan Huson singled. Ruiz doubled to bring in a run, but the Lions would leave two in scoring position.

Orangefield could not get to starter Kason Nelson until the third inning. With the bases loaded, a bouncer to second base was fielded and thrown home. The ball would stop bouncing at the backstop and two scored. A triple put up two more for a 4-1 lead.

That would be all the Bobcats would need, but they would score more in the fourth, ending any chance. Errors allowed for the floodgates to open, with eight touching home plate for a 12-1 advantage.

The 2022 season will be remembered for the district championship that ended a long drought. The Lions have now reached the regional quarterfinals for the past two years.

“They are very good,” Maddox said of Orangefield. “It happens. It is one of those things that you can’t predict. We believed in ourselves, that is for sure. We have a great team with great kids and our first district championship in 29 years. That is something to be very proud of. We can’t be down. I knew that we were going to have a good team. I believe we were picked to finish second. When you are 19-5, that is one of the best seasons ever here in Livingston.”

Maddox said he was proud of the senior class, which includes Ruiz, Cody Patranella, Mitchell Hathaway and Stephan Scott.

“It is a rare group when you have a player like Damian. It is a good group of kids. They laugh and have fun and enjoy each other’s company. I will never forget it.”