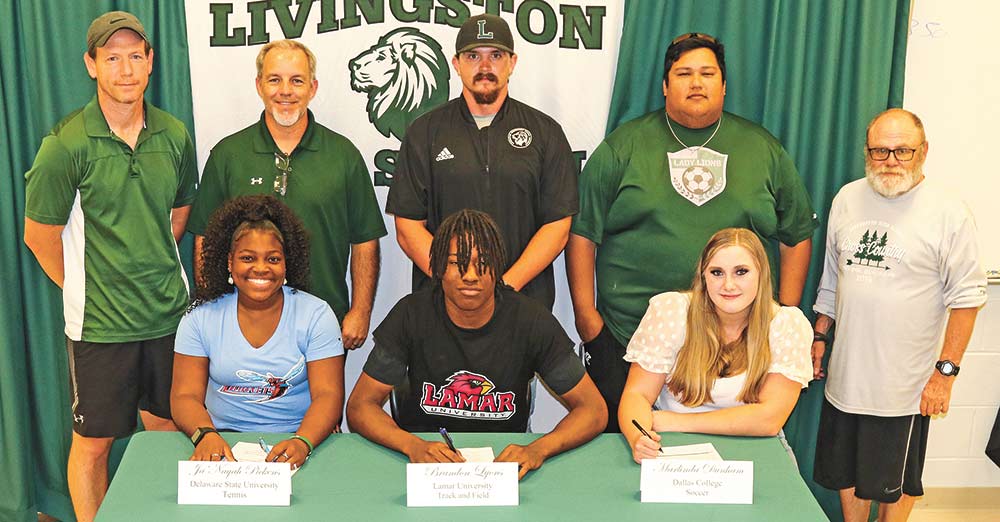 Brandon Lyons (middle) is the son of Sheriff Byron and Sylvia Lyons. He has signed with Lamar University to participate in track & field, with plans to study marketing. Lyons also played two years of varsity basketball. He ran the 200 and 400 meters in track. At Lamar, he will compete in the the long jump and high jump, where he advanced to the regional meet his junior and senior year. Ja’Nayah Pickens, (left) the daughter of Brandon and Le’Shauna Pickens, has signed to further her tennis career at Delaware State University. She is the district’s girls singles champion for the past two years and advanced to the regional tournament this year. The Lady Lions were district champions in 2021 and 2022. Away from the court, Pickens is in the top 10% of her class, a co-captain and All-American on the cheerleading squad, a member of the National Honor Society, and was runner-up in the 2022 Miss Polk County Pageant. Marlinda Dunham (right) has signed to participate in soccer at Dallas College. Dunham played goalie for two years, named first team all-district her senior year. She played volleyball for the Lady Lions in three seasons. During her freshman and sophomore years, she played basketball, and advanced to the regional meet in powerlifting. She plans to major in criminal justice and forensic science.