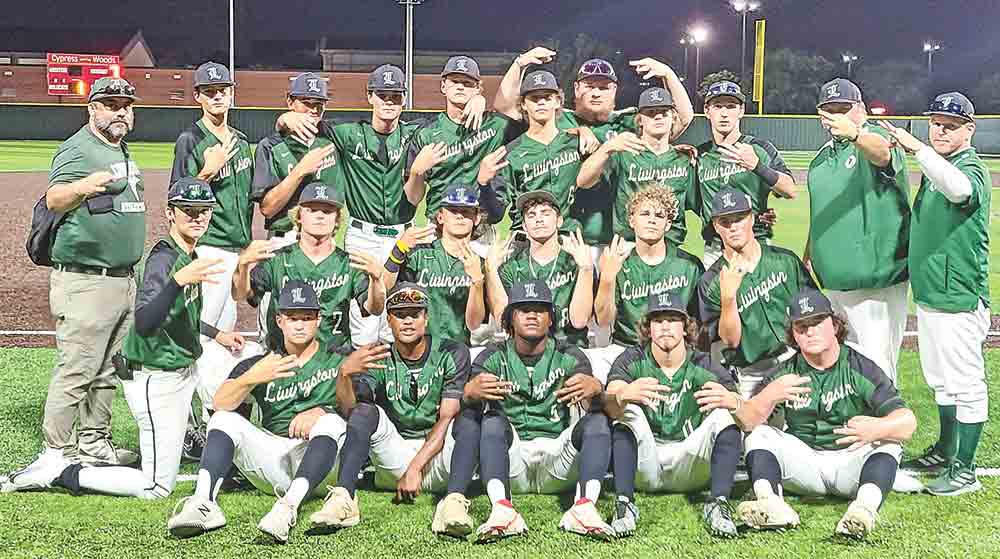 The Lions will advance to the regional quarterfinals. Photo by Brian Besch

Lion baseball is giving fans their money’s worth in the playoffs, coming out on top of a 1-0 nailbiter Friday over the Tigers from Sealy in the area round.

The Livingston bats could not get going until the fourth inning, when Jordan Huson and Damian Ruiz started with a pair of singles and no one out. However, Sealy escaped from the inning unscathed, ending it on a double play.

“It is the small things. We made a few mistakes on the bases, but that was a great team over there,” Lion coach Jarrad Maddox said. “They got second place in their district. It is going to be tough like that all the way through, so we have to be prepared. I knew they would fight. They know how to compete; they are tough as nails and a blue-collar town.”

In the fifth, Livingston again threatened, as J.T. Smith singled and advanced a base when a pickoff bounced beyond the bag at first. Tay McNeal then slugged a single that was enough to bring in Smith ahead of a throw home, giving the Lions the only run of the game.

Ruiz was brilliant on the mound, allowing just a few baserunners. The only threat occurred when Sealy had a runner go from first to third on a ball hit to the wall in left. Smith made a good throw from the warning track to keep the Tigers scoreless.

“I knew they were very fundamental and they could hit the ball,” Ruiz said. “I trust my team enough to throw in the strike zone. I trust them to make plays like they did tonight. Coach told me to fill up the zone and force them to get hits.”

Ruiz said he felt more relaxed on the mound this week. Part of that, he said, was a more comfortable pair of shoes that he was able to wear on the playing surface at Cypress Woods High School.

In the top of the seventh with one out, a throw from an infielder got past first baseman Cody Patranella and the baserunner made the turn for second. Lion catcher Huson was backing up the play and threw the runner out at second from just in front of the visiting dugout.

The final out came on a pop fly to left field that Smith squeezed for a Livingston victory.

“That is too close for comfort right there,” Maddox said. “Every time you get in the playoffs, it is going to be tough. You’ve got to scrap all the way through. Hopefully, it is not like that next round.”

It is the second week in a row that the Lions have won a low-scoring, one-run contest. They had a come-from-behind triumph last week versus Vidor in a 3-2 game.

As of press time, the next round’s opponent was yet to be decided, but Orangefield run-ruled Navasota in the opening game of a best-of-three series.

“Orangefield has pitching and they are sound like them (Sealy), so it is going to be tough,” Maddox said.