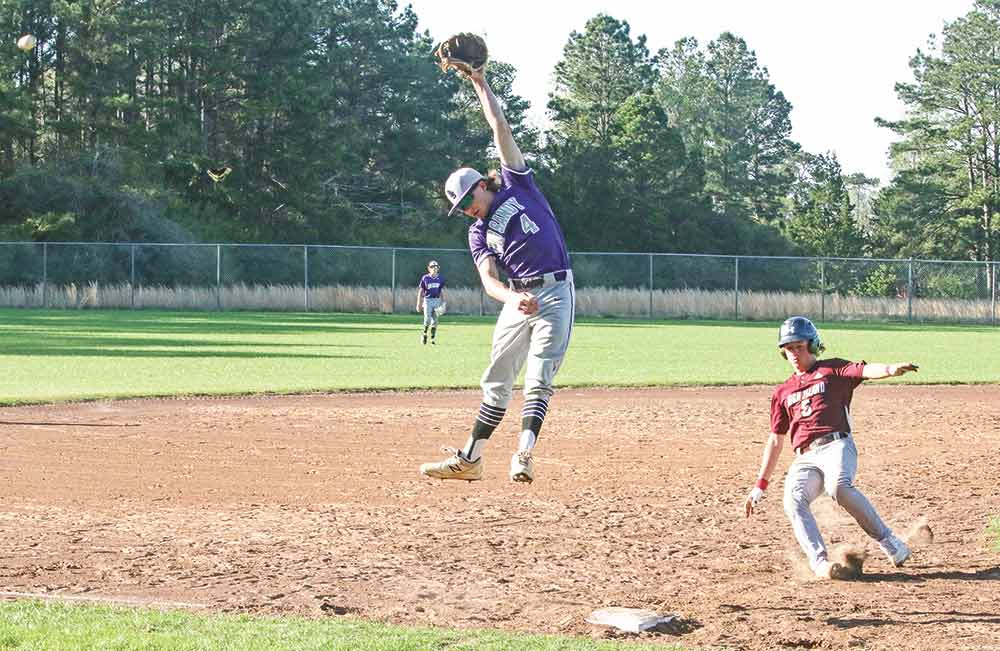 A throw sails over the head of a leaping Bryce Barnes at third base.

Big Sandy baseball beat the tar out of the feathered Friday, defeating the High Island Cardinals 15-2 in just five innings.

The Wildcats got the offense going early, as Brayden Young was hit by a pitch. After advancing a base, Milton Hoffman got him in with a sacrifice. Kainey Alec doubled and Adrian Thompson drove him in on a base hit. After Trace Flores reached, Bryce Barnes brought the third run in on a double for a 3-0 lead after an inning.

The ‘Cats added two more in the second, when Tony Carter singled and stole a base, Young was hit by another pitch and Hoffman drove both in with a single.

The Cardinals got a run back in the top half of the third inning and Young relieved Hunter Brown after two-plus innings on the mound.

Up 5-1, the group from Dallardsville answered with five more. Barnes was beaned, Jason Valderez walked and Carter was also hit by a pitch to load the bases. Ethan Murphy also took a pitch to the body, driving in a run. A wild pitch brought in a run and Young got the eighth run in on a sacrifice fly. Hoffman drove in a run with a base hit, Alec and Adrian Thompson took a base on balls to load the bags again, and Flores walked to drive one in.

Three different hurlers took the mound to get some work for the Wildcats. Players shifted positions and showed little drop off, something Big Sandy coach Blake Brown said has expanded in 2022.

“We can improve in every aspect all the time, but our defense has been a lot better. We have the pieces to be able to move around and it really makes us flexible,” Brown said. “With any pitcher on the mound, I feel like we don't have any holes. That is big for us. We moved Tony Carter from shortstop to catcher this year and that has really shored us up behind the plate and has allowed us to move Trace to second base. It just kind of fits and everyone is feeling a little bit better than they did last year. Our guys are just playing hard and playing fast.”

Needing a run to possibly close the game early, the Wildcats scored five in the fourth inning. Valderez tripled and took home when Carter was caught in a rundown. Murphy bunted for a hit and Young picked up an RBI on a single. Hoffman produced the second triple of the inning, allowing two to score. He would score soon after on an error at third.

Big Sandy is now 10-6 on the season, but 6-0 in district and tied atop 25-2A. Scheduling schools a classification or even two above 2A, the team played well, according to Brown. District play has been lopsided, with a 93-7 cumulative score over the six contests.

“Sabine Pass is coming up this week and they are always competitive. Evadale is the next and then West Hardin, so I think the next three weeks are going to get us ready for the playoffs,” Brown said. “Our thing is our (non-district). We played up as much as we could to see the best amount of pitching that we could see before the playoffs. Our guys competed really well in those tournaments. We went 2-1 in the last tournament at Little Cypress-Mauriceville with wins over West Orange-Stark and Hemphill. We got to see some really good pitching that weekend too. I think that is going to propel us to hit better pitching in the playoffs this year. As long as we play clean defense, which we have been, I think we have a pretty good shot to make a run.”