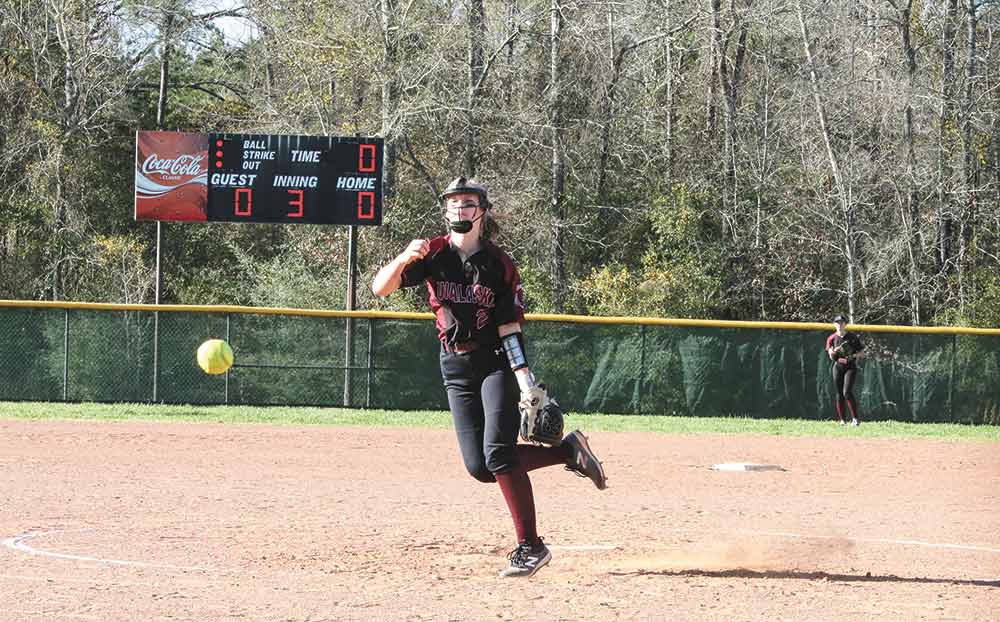 By Bian Besch
This email address is being protected from spambots. You need JavaScript enabled to view it.

Onalaska softball lost a heartbreaker Friday, stung 3-2 by the Lady Hornets of Hardin. Lady Cat pitcher Savanna Benningfield flirted with danger all afternoon, escaping multiple threats from the Hardin offense. It would finally catch up to her in the final frame, as the Lady Hornets got two runs to win it.

The ‘Cats broke the scoreless tie in the third inning with a run. Benningfield singled and Chasitie Roberts was hit by a pitch. Both advanced on a double steal and Madison Wilson drove Benningfield in with a sacrifice grounder to go up 1-0.

A couple of errors produced two Lady Hornets in scoring position, and a sacrifice fly brought one in. Kenadi Houser fielded a grounder at shortstop and threw home to catch a baserunner at the plate, preserving the 1-1 tie.

“We are just not consistent and our bats are not consistent,” new Onalaska softball coach Ashley Sustaita said. We came out Tuesday and hit the ball, with 21 hits. Tonight, we can barely hit the ball out of the infield. We are working on consistency and we had errors tonight. We are trying to clean up the basics of the game and making sure they have a confidence to play the way they are supposed to play.”

Onalaska went back to work in the fourth, with Alora Pinkert starting the ‘Cats off on an infield single. Houser reached on error and the pair stole bags on the next pitch. Kalli Saucier smacked a pop fly into centerfield that fell just short of the wall and into a glove. However, it was plenty deep for Pinkert to tag and score, going up 2-1.

A double with a runner on in the seventh inning allowed Hardin to tie the score at 2-2. A Texas Leaguer drove in the go-ahead run with two outs. Houser chased the looper to the grass from her shortstop position, but couldn’t quite track it down.

The Lady Cat defense played well in places, saving a few runs. Pinkert made a good catch in left that likely saved two runs in the sixth and Brittany Phillips caught a liner and doubled up a runner on second in the third.

“We started (the season) on a 7-0 run and won the Madisonville tournament,” Sustaita said. “We took them to Wimberley and we saw some really good teams. It was good for us. We hit the ball and did what we needed to do. When we came back, it got in our head and we have to refocus. I thought Tuesday turned the corner for us, but we hit this bump again and we just have to get over it and be ready.”

The coach said the district is all over the place and anyone can win on a given night. This is Sustaita’s first season as softball coach, but she has coached most of her girls on the basketball court for years.

“They have accepted us and accepted me with open arms. They are working hard. The biggest thing is that softball is such a mind game. If they don’t have the right mindset when they are on the field and in the batter’s box, it doesn’t matter. They have to believe in themselves and that is what we are trying to instill in them.”