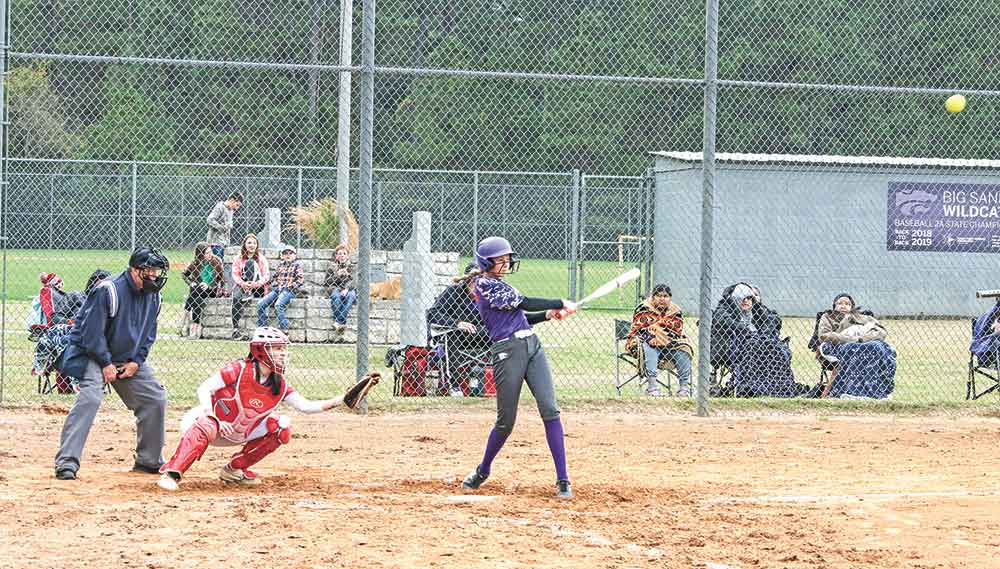 Lauryn Hoffman singles and drives in a run with this swing.

Big Sandy softball dropped a 9-5 game to Deweyville, the District 24-2A leaders, Friday afternoon in Dallardsville.

The Ladycats struck first in the game, when leadoff hitter Chloe Cox reached on a walk. Maddy Ager got her over on a fielder’s choice, and Cox would score on a passed ball.

However, Deweyville would answer with three runs in the second inning and another three in the fourth, to take a 6-1 advantage.

“Deweyville, the team that just beat us, is undefeated in district,” Big Sandy coach Mark Young said. “They 10-run ruled Evadale, so for us to come away with 9-5, I thought that was good for us. A lot of these girls are inexperienced, so I think it will be good for them going into the rest of the season. We are senior heavy and we are a freshman heavy. We have just a couple of sophomores and juniors.”

Ager would get the ‘Cats offense going in the bottom half of the fourth inning with a single, followed by the same from Madison Gardner. Lauryn Hoffman singled in a run. Shelly Weatherford would drive in a run in with a base hit, making the contest 6-3.

Again, the Lady Pirates answered, scoring a run in each of the fifth, sixth and seventh innings.

Down 9-3 in their final at-bats, Big Sandy did not surrender. Dallas Holder reached by error and Ager walked. The Lady Pirate battery had issues in the final frame, allowing Holder to score on a wild pitch and Ager to get in on a passed ball. One more baserunner reached before Deweyville was able to obtain the final out.

“I just told them that we could have just laid down and quit and we didn’t. We kept battling, and that meant a whole lot,” Young said. “I am very excited (about this season). Last year, we struggled mainly with numbers. This year, we don’t have that problem. Instead of just trying to get nine on the field, I have three or four on the bench where there is not anything less than what is on the field.”

Big Sandy is still in a good position in the district race at 3-1. They will travel to High Island on Tuesday.