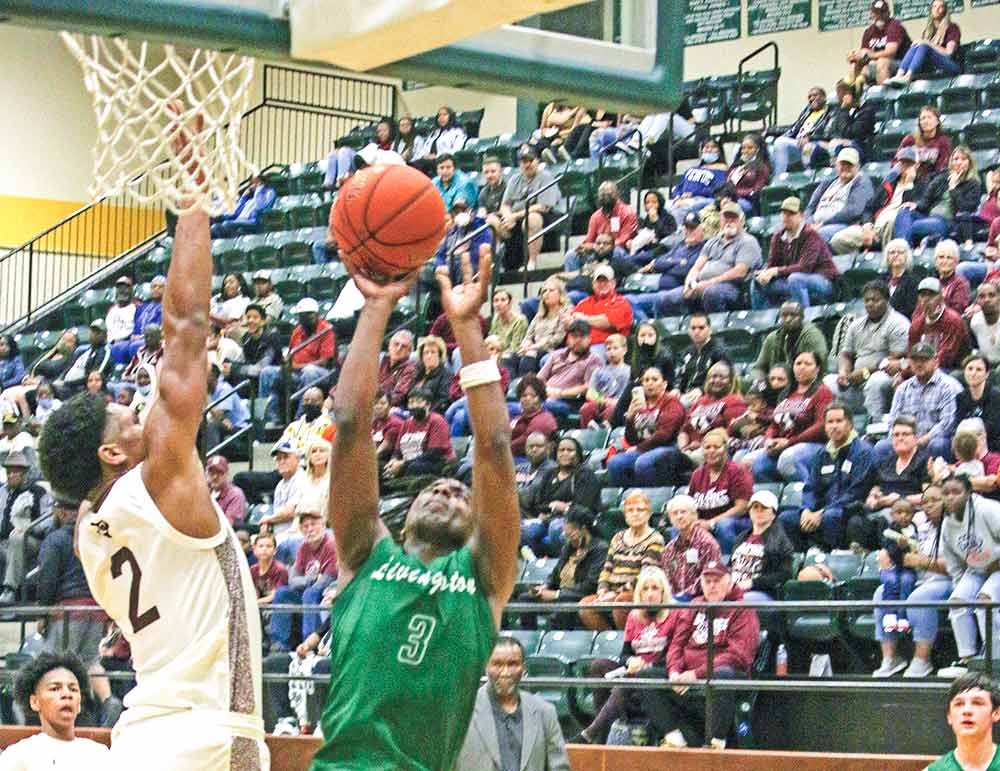 Jacob Byrd scored eight points in his final game as a Lion. Photo by Brian Besch

Livingston basketball ended Monday in the bi-district round, as the state’s No. 2 team begins their march through the playoffs. Silsbee defeated the Lions 101-51, ending Livingston’s season at East Chambers High School, just as the girls’ season ended the week prior.

Livingston held a few early leads after the tip, with their last a 6-4 advantage. The Tigers rolled off 13 consecutive points after that and went on a similar run to end the first half. At halftime, the Lions were down 58-30.

Silsbee’s press was relentless, and the Tigers used all 14 players to attack, consistently rotating multiple players off the bench. Long, quick athletes that can handle the ball challenged every Livingston pass, creating turnovers and fast breaks all night.

“We came out playing pretty good,” Livingston coach Calvin Phillips said. “We told them that they are going to have to come meet the ball and we can’t throw lob passes, because that wasn’t going to get it done. Everything that we told them, they did it.

“(Silsbee gets) to the bucket really good and they don’t miss the three ball too much, either. They’ve got a good outside game and we played them pretty good in the first quarter. They started tipping the ball and taking off in transition. The next thing you know, we are down. If you’ll just be patient — we told them that we don’t even mind them getting a five-second count, because then you have a chance to go back and play defense. To let them take it and go into transition, that is what hurts.”

A minimum of 20 points was scored in each quarter by the Tigers, topping out at 36 in the second quarter.

Livingston played well in the game, but was simply outmatched. The Lions had good showings from William Dault and Jayden Randolph, who each scored 13 points. Randolph was 5-for-5 from the field and pulled down nine rebounds.

The Tigers were led by Dre’lon Miller and Jared Harris, each with 22 points. Miller had seven rebounds and four assists, but may have been outplayed by Harris, who nabbed 10 steals. Harris played in only 15 minutes of the game. LaMarcus Bottley also contributed big, with 20 points and four steals.

Silsbee likely still has a long time to play this year, but figures to be even stronger next season, with only two seniors on the team.

For Livingston, Julian Gardner, Jacob Byrd, Brian O’Neal and Brandon Lyons were all contributors in their final game wearing a Lion uniform.

“I told them that no one even thought we would get this far,” Phillips said. “I still say that we are overachievers. We played hard tonight, but they were just better athletes than we were. We beat Hamshire-Fannett, we beat Huffman at home and we almost had Hardin-Jefferson at their place. It was all on just pure effort and hustle.

“I think we got a little bit away from team ball toward the end. It started to be a little more individualized ball and that hurt us a bit. I don’t really have anything else negative to say about those kids. They played hard. I stayed on their butt consistently, but as a coach, you are going to try to get the most out of them. They are overachievers and I am happy for them. I think we have a good chance to win district next year. Everybody in district is losing a lot (players) and we bring a lot back.”