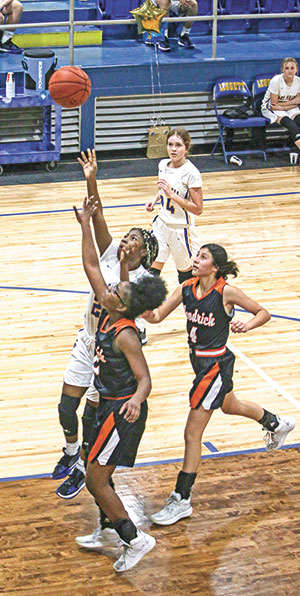 The Lady Hornets seemed to have the game under control, securing a first-half lead of 31-14.  However, the Lady Pirates employed a full-court press in the third quarter that forced turnovers and got the team easy buckets. Heading into the fourth quarter, they had trimmed the Goodrich lead to 40-30.

“It was kind of scrappy tonight,” Goodrich coach Pinellafie Johnson said. “We just didn’t play the way that we practice. We got the job done, yes, true enough. We tried running our 1-3-1 (zone defense) and had those girls been hot shooting from the inside, they would have made us get out of it really quick. I told them that we were going to run our 1-3-1 just to keep them from shooting threes. When we got in our 2-3, I told them that they definitely have to move their feet on that, because they are going to throw it up and it is going to go in.

When we went to the 2-3, that is what happened. We refused to move our feet on defense. We did what we had to do and we got the job taken care of.”

Goodrich did most of their damage from inside a 10-foot perimeter, with jumpers and layups.

“We have been working on a lot of shots in the paint and right around the paint area,” Johnson said. “We told them that we really don’t have an outside game, so we have to do our best to score within that paint. They did a good job on the boards.”

Goodrich had an answer in the fourth, extending their lead to a 20-point difference for the win. Leggett struggled on offense with just five points over the final eight minutes.

“There was too many turnovers in the first half,” Leggett coach Terri Barlow said. “We came out in the third quarter and had a great quarter and cut it to 10. When I looked up again, we lost by 20. We started throwing the ball away again and put them at the free-throw line.

“We got outrebounded because we don’t want to box out and put a body on anybody. It is a good feeling to have everybody back next year, except for my senior (Addison Hinson). I will give them a week off and then we will start on offseason and track.”

For Goodrich, Breya Passmore and Latrina Morgan had 18 points each, while Marisa Olivares had 13. Lone Leggett senior Hinson led the Lady Pirates in scoring with 13 in her final home game, while Kylie Valderez had nine and Tamera Henderson had five.

The Leggett girls will travel to Chester to wrap up the season. Goodrich has a Friday home game with Chireno next and will then travel to High Island. The Lady Hornets are currently in fourth place and fighting to hold on to a postseason bid.