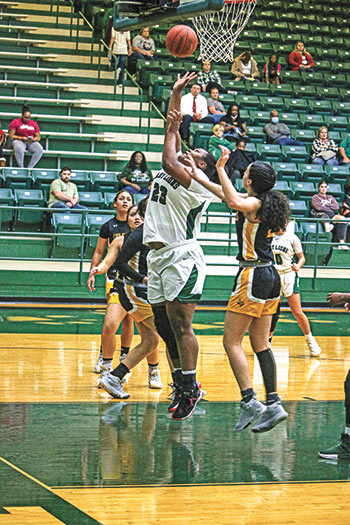 The Livingston Lady Lions leaned on its defense Friday to grab a district victory over Liberty 41-26 in Lion Gym.

The Lady Panthers had no trouble keeping up with Livingston through most of the first quarter. The game was tied late in the period at 11-11. However, Livingston would go on a 20-1 run from there. They held Liberty to a single point in the second quarter and two free throws in the third.

“I told them to go into a half-court diamond set,” Livingston coach Brittany Jefferson said of her defense. “It still wasn’t great, because they could have got a lot of steals and deflections. But overall, they did better than what they have been doing.”

With the win, Livingston is now 2-1 in district play. They have a win over Splendora and dropped a game to district favorite Hardin-Jefferson earlier in the week. It is a turnaround from struggles early in the season.

“In (non-district), it was pretty rough,” Jefferson said. “They started picking it up when we got into the Huntington tournament. We went 4-1. We came out in third, but they did real well. We have to keep up our energy, because it started off bad. They are trying to progress and trying to keep it going. They are playing as a team and we are taking it day by day.”

The coach said ball control has been the biggest weakness of her team and a reason for the slow start. “(Mia) Poncho does what I ask her to do, but at the same time, I need the other guards to step up and handle the ball as well. When a team presses us, we need to be able to handle the ball well and cut out all the turnovers.”

Jon’Toyrian McNeal led all scores with 18, while Hartsell had seven points and Natavia Davis had six.

A trip to Huntington on Monday is next on the schedule for Livingston, and they will not return for a home game until a Jan. 11 contest with Huffman Hargrave.