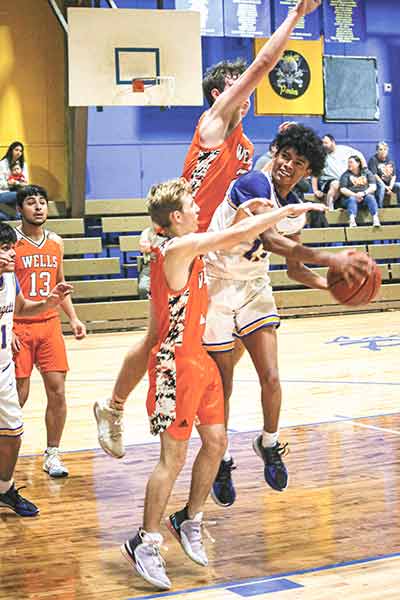 Josh Perkins tries to put up a shot in traffic. He had 19 points Tuesday.By Brian Besch

The Leggett Pirates survived a late scare Tuesday in Dudley Dickens Gym to come away with a 61-57 win over the Pirates from Wells.

Leggett had a comfortable advantage midway through the fourth period at 16 points, but Wells worked its way back into the contest. They outscored the home Pirates 21-14 in the final   quarter.

“We got out and played good defense and got the lead, but slacked up,” Ra’Shod Jefferson said. “I tell them at all time that it is all in ornothing. We start district Friday, and we have a lot to work on. On defense, we have to stop playing lazy and need to go all out. We just have a lot of work before Friday, so these next two days will be nothing but hard work.”

Up just three points with 1:15 remaining, Andres Diosdado hit a 3-pointer at the top of the key that rattled in off the backboard.

Wells continued to close in, getting the margin to 59-57. JaColby Sells hit two free throws with four ticks left on the clock to put the game out of reach.

“Since the beginning of the season, we have improved,” Jefferson said.

“Not having one of our key players at the beginning, the guys know how to step up without someone. With him being back, our team has tremendously improved. If we expect to go deep into the playoffs, we have to work as a team.

“We need to work on help defense, finding the open spots and how to communicate with one another. If we have the lead, we have to know how to pull it back instead of rushing shots and letting shots come to you.”

JaColby Sells led his team with 24 points, Josh Perkins had 19, Jesse Calderas had 11. Cole Turner led Wells and the game with 27 points.

A district contest at Zavalla is next on the Leggett schedule. They will return home Jan. 4 for a contest with Burkeville.